posted on Oct, 21 2013 @ 01:03 PM
link
I know there are many photographers here on ATS so this may be right up your street , photographer Tony Bennett has scooped top prize at the national photography awards with this shot of Crummock Water which to me has an ethereal almost Middle-earth feel about it with the lighting and mist swirling over the lake .
Tony Bennett called his shot Crummock Water Mists and Reflections 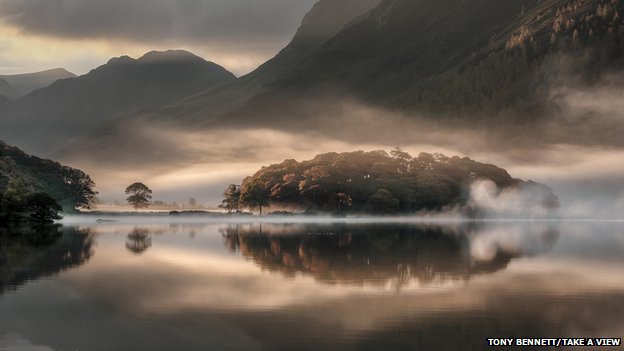 Mr Bennett said his photograph had been difficult to take as "every second the scene was changing, creating a hundred memorable images".

"The still night mist began rolling and tumbling, as if in protest, as the heat of the sun vaporized and dispersed it forever," he said.

"Within a minute, it was over - a moment in time, never to be repeated but always remembered."

It's worth checking the link for some of the other pictures on show ... my favorite is No 6


Those were beautiful. I love pic 3 and 6 the most.
Truly amazing.
Thanks for sharing
-nat


Gorgeous! The mist curl and reflection on the right side in front of the island is...perfect. *sigh* It does look like Shangri-La or Middle Earth joining us for a bit...

And in the other photos, number 6 is my favorite besides this one... Thanks so much for posting!!!

It reminds me of the view from mount Snowdon in Wales, in that if one happens to be there when there is low lying cloud, and one also happens to be just under, or just inside the cloud, everything takes on this ethereal and altogether otherworldly appearance. I can well understand why this image was a winner. It's breathtakingly gorgeous.