After months of anguished debate over mass shootings, gun control and Second Amendment rights, the Justice Department finds itself on the defensive after a training manual surfaced that suggests federal agents could face a firing squad for leaking government secrets.

The online manual for the Bureau of Alcohol, Tobacco, Firearms and Explosives — complete with a photo of a turn-of-the-century firing squad — was obtained by The Washington Times from a concerned federal law enforcement official, and it immediately drew protests from watchdogs who said it showed a lack of sensitivity to gun violence and the continuing hostile environment toward whistleblowers.
Stephen Kohn, executive director of the National Whistleblower Center, said the DOJ 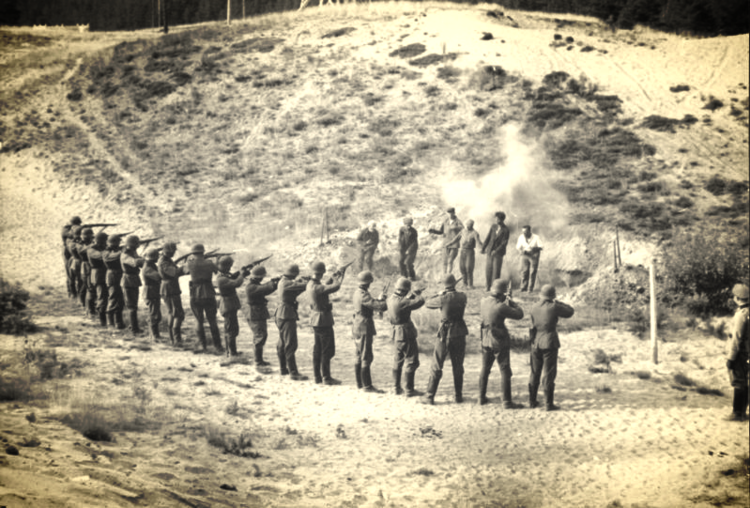 This is very Nazi and dictator like if you ask me. "Spill our secrets and we will spill your blood". The gov't is getting overly paranoid about who they trust with their information after the Assange, Manning, and Snowden. Instead of regulating their trust circle, they are just going to kill them for leaking. Which I am sure most of us on ATS already assumed as much for whistleblowers.

This just confirms my beliefs that not everyone is subject to "innocent until proven guilty".

“The government leaks information all the time and they get away with it,” Mr. Kohn said. “They don’t go after leaks that they support. The government leaks, and when it is officially condoned they do not investigate or prosecute.”

A major incident that Mr. Kohn referenced was the case of former U.S. Attorney Richard Convertino, who was removed from his position in Michigan by the DOJ after the DOJ leaked negative information about him.

“It significantly harmed his reputation, turned out not to be true, and we filed a privacy act lawsuit in 2003 and we are still fighting with the Justice Department to try to find out who the source of that leak was,” Mr. Kohn said. “They have used well over $1 million of taxpayer resources to cover up a DOJ employee who violated the law when he leaked information to defame a whistleblower and that’s one of the biggest problems with this whole campaign against leaks.”

A waste of taxpayer dollars of course they always waste taxpayer money on stupid crap...


You just know that when this regime is hitting the only reliable news outlets left with charges they only use for terrorists that they ain't screwing around. I just hope that more people are waking up to where the real threat against them is coming from.
edit on 16-10-2013 by Zcustosmorum because: (no reason given)

If true, kind of reminds me of gang organization to keep secret, except gang was more efficient and did not use too many bullets to make the same results...


It's just sad all around. This is the direct result of paranoia. The more secrets they have, the more people they have to trust with those secrets, thus more potential whistleblowers.

I agree with your gang comment as well. It's pretty true to be honest. Gangs also are extremely paranoid about people in their inner circle much like the gov't has become. Trust isn't handed out, it's earned.

posted on Oct, 16 2013 @ 02:57 PM
link
i don't want to be picky, or change the subject, but those troops don't appear to be french troops.
they look like german troops, from the helmets down to the boots. even the rifles look like german.

i know at one point the germans had french troops fighting on their side after they invaded france and took over.
but i thought they still wore french uniforms.

i clicked your link and no pictures there come up, even though they show a spot for one that says click to enlarge.

did that picture come from the article?

The method of execution of Federal prisoners for offenses under the Violent Crime Control and Law Enforcement Act of 1994 is that of the state in which the conviction took place, pursuant to 18 USC 3596. If the state has no death penalty, the judge must choose a state with the death penalty for carrying out the execution. For offenses under the 1988 Drug Kingpin Law, the method of executions is lethal injection, pursuant to 28 CFR, Part 26.

so it depend on the state, and there are only two states that allow firing squads, and they have restrictions on that.

Oklahoma, Utah
Utah no longer offers the firing squad as an option, but would allow it only for inmates who chose this method prior to its elimination .
Oklahoma offers firing squad only if lethal injection and electrocution are found unconstitutional.

links for both extext.
Methods of Execution


They are Nazi soldiers. I found that from another website that linked to the original article. I figured they used the same picture. Still the fact is still the same.

Still that could change, two could turn into more. Is that likely? That is just another question. Also i think the federals could always operate outside the law. They have been doing it for a long time...


The French troops on the German side fighting Germans on the Russian side in Berlin in 1945 wore German uniforms, with a cuff tittle on the left lower sleeve with the word 'Charlemagne' woven into it, that guy being a famous french king.


Yeah it should... Except when posting in the "Breaking Alternative News" forum you have to use the article headline as the thread headline... T&C say so.


Well then. We know they will have no problems shooting citizens then. Since they'll shoot agents.

Years from now, I wonder what the stats on heart attacks will be. I bet the state of this in the US is causing a jump in stress related illness.

posted on Oct, 17 2013 @ 02:59 AM
link
I suspect this has been the norm for some time now its only they have decidedly to somewhat publicly address the issue.....I would imagine this is not much of a surprise to those that frequent sites like this one


Kind of my point, in a sense. If they have no problem shooting their own payroll (again links to criminal organizations)then they only care about their bottom line.


So let me get this straight.

A bunch of jumped up policemen want to be allowed to shoot those colleagues of theirs who are prone to speaking out, or leaking information?

Since when is the ATF part of the military? Do they really think their work places them in high enough regard, or is important enough to national security that a failure on the part of its operatives to maintain silence on certain topics, ought to result in death?

What a deluded bunch of egomaniacal buggers!

posted on Oct, 17 2013 @ 03:52 AM
link
Someone is going to come in here and say something about making them eat GMO or McDonalds. Just wait.


Well then, whomever authorised that suggestion to be included in the manual, that agents who leak secrets should be executed by firing squad ought to now be had up on charges of threatening murder of government agents.

There are prescribed legal procedures and punishments for this kind of thing, arbitrary execution by firing squad isn't one of them.

It's murder, and anyone advocating murder is legally liable to criminal charges.

Arrest the bastards who are playing psy-games using the threat of murder to get what they want.

Nobody is above the law, even the lawmakers.

posted on Oct, 17 2013 @ 05:23 AM
link
So, what's the big deal? POTUS and he Lords & Ladies all keep saying we're at "war". (They fail to mention that the last time we were actually "at war" with someone was a group of people called the Germans and Japanese)
So, since the ATF is one of those useless, quasi-military agencies that the Politburo in D.C. love to cook up, then yes, if the agent divulges secrets, firing squad is OK. . If he's a civilian IT contractor with 6 lap-tops of classified ATF gobble-d-gook on them, give him Putins business card and a one way plane ticket to Hong Kong! (That is how it works right, civilians and officers who compromise classified data get - book deals and talk shows (Patraeus and Broadwell) come to mind, but enlisted persons get prison (Manning) (and rightfully so!), so yeah, any "union" puke in fed service, that coughs up classified data to an enemy, shoot them in a firing squad scenario, make sure you shoot them in the gut with a small caliber bullet, and leave them lying in the Sun face up, that works for me (as long as the disclosure was INTENTIONAL) that works for me. It works for the Russians and Chinese and North Koreans doesn't it (Is it North Korea were the "elite" can get a divorce or break up with someone just by running to the cops and saying your "ex" said that Lil Kim is fatty-fat-fatty

Theres nothing wrong with a secret AT ALL.

When those secrets breach rules and laws of the country - THATS when it becomes hard to keep it a secret - SHOCKING isnt it when performing illegal, secret activity's people find it hard to stay quiet!?

posted on Oct, 17 2013 @ 12:01 PM
link
Why hasn't this band of jackasses been disbanded and their agents sent off to the GSA to mop floors and clean toilettes? They are a friggin disgrace! What a joke this government is!!!
edit on 17-10-2013 by HUMBLEONE because: Vae Victis!!