Joe Jacobs, a 34-year old father of four who lives just outside of Denver, views the current dysfunction in the U.S. government as a sign of something much bigger.

"I feel like the American government is collapsing," he said. "The American financial system has too much debt to pay back, and they can only delay the inevitable so long."

A collapse, he believes, could lead to martial law, riots and destruction. Only those who are prepared will remain to rebuild a new government, he said.

Jacobs has been preparing for this societal collapse for years. And he thinks the government shutdown, coupled with the impending debt ceiling deadline could be the final push.

Alright Joe, we know you are an ATS member where are you?

Rob Richardson, a 35-year-old who has been prepping for most of his life, feels prepared for any event -- including the chaos he believes will likely consume the country if the government defaults on its debt.

"I believe it will be the perception of default that will push people over the edge," he said. "The monetary system is built on an illusion that we have a strong currency and economy -- when that's shaken, that's when people start getting worried, and panic about getting food and paying bills."

That could lead to riots and looting, eventually prompting people who are prepared, like Richardson, to take shelter and protect themselves, he said.

Richardson runs the survival advice blog, OffGridSurvival.com, and he has seen a spike in emails and comments from visitors over the last couple weeks.

"A lot of people are definitely worried about what's going on, and people are asking me what they should do if the government shuts down or goes into default," he said. He recommends stocking up on at least three months' worth of food and constructing a safe room as an additional layer of security in case your home is attacked.

No one can doubt Rob has taken a peek at our Survival forums ...

Another prepper, Matt Wilson, moved to Switzerland from the United States in 2011 because he fears eventual nuclear war between the U.S., Russia and China.

While Wilson believes the United States' failure to attack Syria will be the trigger for the war, he thinks the government shutdown and debt ceiling just further confirms to enemies that the U.S. "is in decline," potentially hastening the war.

To prepare, Wilson is storing additional food and water, and has transferred all of his money from the U.S. to Switzerland -- a move that resulted in a tax hit of more than $100,000. He has also built a nuclear bunker in his basement in Switzerland in case the chaos spreads globally.

I don't know if this was a good idea Matt, somewhere I read if the US defaults, The property of American citizens can be siezed ... Even bank accounts.

Gregory Nemitz, meanwhile, isn't too concerned about the days and weeks ahead. But he does think the country is heading down a path of destruction that will lead it to collapse in a matter of years. He runs a company that sells beef jerky (mainly to other preppers), Beefjerky.com. And in the event of disaster, he plans to survive off of the 200 pounds of beef jerky he has on hand at any given time. He's also shopping for a 45-foot sailing yacht, so he can take refuge at sea

posted on Oct, 16 2013 @ 07:45 AM
link
This is becoming the norm - the last couple of years. Part of the reason is because even the government pushes readiness. Having to have go kits if you serve certain populations, plastic to put on windows with duct tape, a plan, etc.

It also feels like something is in the air. Almost like an increased electromagnetic energy? Is that possible? The need to pin that feeling on something is overwhelming but maybe it won't be the government; maybe it will be nothing - but something is making the hairs on the back of the neck stand up on some, so to speak.

We have the same ability for instinct that animals do (but is overridden by reasoning most of the time). If people keep feeling the need to prep I say it can't hurt. But reason needs to be balanced with that feeling (since clearly can't find what the "threat" is). It could just be as I mentioned above - a natural electromagnetic - something that is off - so people don't know what to make of it.

Because people seem more stressed (here and there but severe shifts), I also believe something is up - people's instincts for fight or flight are kicking in. Because there is no imminent danger it causes tension, and some look around a bit longer than others to make sure the threat has passed (the invisible thing invoking that feeling).

When disaster strikes, I am robbing a prepper...


Chances are it'll be the last and dumbest thing you ever attempt to do.


So, now CNN is getting in on the scaremongering?

Does that mean we really don't have anything to worry about now?


You ain't kidding, I didn't even read the comments, possibly better than the article 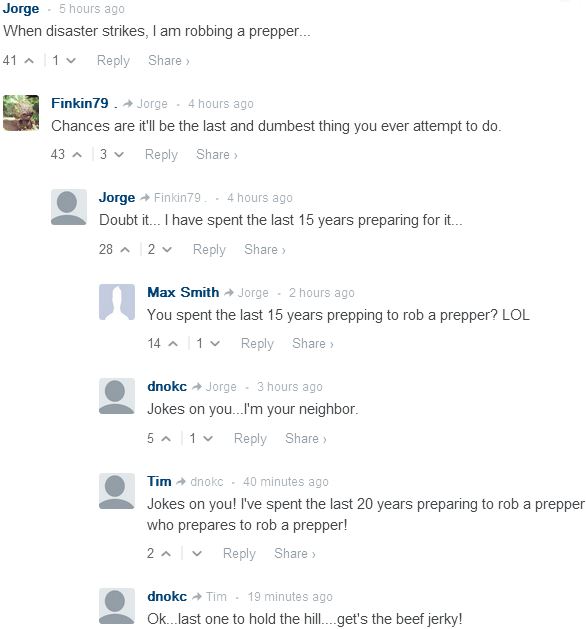 
It's hilarious people think that in a SHTF senario they can rob people that will be armed and dug in. They may as well put a bullet in their own heads. I'm in scotland and have been prepping with buying non perishables, vitamins, tinned goods and lots of water and other kit. My wife thinks I am mad but if things go bad quick a trip to the supermarket will be like something from mad max. People are starting to wake up buts it's too little too late. I had read a good few books on the matter and the mask of civilisation can slip very fast and it is not a pretty site.