Here, Robin Leech has a message for you. Frankly this video scares me because it reaffirms what I have been saying all along. Wakeup call! And yes he does mention the debt.


it's horrifying what this man has led America into.

And please also explain how the debt and deficit are not related. Each years deficit is tacked onto the debt balance. The deficit just doesn't fall off the face of the earth at the end of the year.

And please also explain how the debt and deficit are not related. Each years deficit is tacked onto the debt balance. The deficit just doesn't fall off the face of the earth at the end of the year.


So let me see if I got this right... Since Obama went on a manic spending spree with our tax dollars and spent more in one year than most spend in their entire terms, this is now the top figure that you are basing this "cut in half" rationale on?

Do you realize that this supposed "cut in half" deficit is still larger than any president has ever had in the HISTORY OF THE US? Plus this was mostly a forced diet by the sequester cuts.

By the end of this year, the US Debt will have gone up by about 7 trillion during his presidency. It was at around 10 trillion when he came into office.

---Combined US debt for EVERY president before Obama = 10 trillion


For some truth in advertising, here is how Obama should have worded this.

"Although it is still totally out of control, I cut my reckless spending by half!"

Also keep in mind that Obama is already talking about ending the Sequester. Apparently, ten years is too long to save money, we've saved enough as it is and need to ramp up the spending again.

One more point, the deficit being brought down has much to do with the Republicans, but Obama is taking credit for it. We all know if he had his way that the deficit would be right where it was last year, if not higher.


You know... I really hate defending that man. I hate myth worse though.

This is a ridiculous statement that a quick search can help clear up for you. 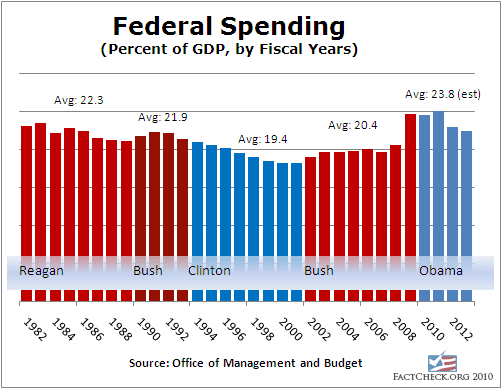 He's also spending at a much slower rate than any other President in decades. 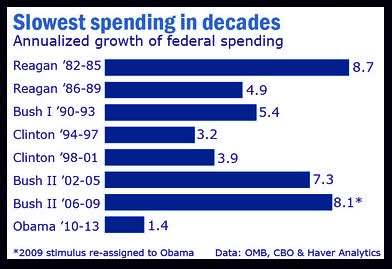 By the end of this year, the US Debt will have gone up by about 7 trillion during his presidency. It was at around 10 trillion when he came into office.

Yes it was around 10 Trillion at the end of Bush's 2nd term. Do you know what the national debt was when Bush took office? 5.7 Trillion. So GW raised it almost 5 Trillion and don't forget much of his economic policies are still in place. Maybe Obama shouldn't have counted on retaining both houses and focused on the budget instead of healthcare. But please stop peeing on peoples legs and telling them it's raining, we are likely not ever going to recover from Bush's presidency.


Sadly this days politicians make a mockery from those that do not understand how the political game is played, with promises and good wishes.

See predictions and expectations are not real, this is the way that the government can paint a brighter future when is none, as people tend to have short time memories and forget about the promises.

I wonder where are today those same words that Bush spoke about predictions and expectations about the deficit when he was in power, to this day the deficit has gotten bigger and the debt keep growing everyday.

People remember is all a lie, he is lying now and will lie until the day he is off the office.


Sorry to say this but this numbers do not add up with the reality of the national debt in America right now, since Obama took office.

(CBS News) The National Debt has now increased more during President Obama's three years and two months in office than it did during 8 years of the George W. Bush presidency.


The Debt rose $4.899 trillion during the two terms of the Bush presidency. It has now gone up $4.939 trillion since President Obama took office.


The latest posting from the Bureau of Public Debt at the Treasury Department shows the National Debt now stands at $15.566 trillion. It was $10.626 trillion on President Bush's last day in office, which coincided with President Obama's first day.


The National Debt also now exceeds 100% of the nation's Gross Domestic Product, the total value of goods and services.


Mr. Obama has been quick to blame his predecessor for the soaring Debt, saying Mr. Bush paid for two wars and a Medicare prescription drug program with borrowed funds.


Federal budget records show the National Debt once topped 121% of GDP at the end of World War II. The Debt that year, 1946, was, by today's standards, a mere $270 billion dollars.


Technically he is right...

Despite the deficit being still high, it is half what is was 4 years ago. In 2009 the deficit was over 1.3 trillion, this year it expected to end at around 650 billion.

The 1.3 trillion was his first year, bushes last year was about 800 billion. So you could easily say he hasn't reduced the deficit at all.


We're not talking debt, we're talking deficit. There's a difference between the two.

Definition of 'Debt'
An amount of money borrowed by one party from another. Many corporations/individuals use debt as a method for making large purchases that they could not afford under normal circumstances. A debt arrangement gives the borrowing party permission to borrow money under the condition that it is to be paid back at a later date, usually with interest.

Definition of 'Deficit'
The amount by which expenses exceed income or costs outstrip revenues. Deficit essentially refers to the difference between cash inflows and outflows. It is generally prefixed by another term to refer to a specific situation - trade deficit or budget deficit, for example. Deficit is the opposite of "surplus" and is synonymous with shortfall or loss.

The deficit is what is being talked about. The debt has grown outrageously, but the deficit has dropped.
edit on 10/17/2013 by Zaphod58 because: (no reason given)


Got you,You are right I also found more information on the deficit, from Marketwatch


Don't give in too soon here. The national debt is the accumulation of yearly deficits and interest. You know everyone in the Obama camp is too quick to point out the difference. As if to sway the topic, make folks bow down in disgrace, and then back off. Why are they not explaining the difference and relationship in non technical terms like I am?

Yes they are 2 different things, but each years deficit is a part of the debt. The deficit just doesn't disappear into a black hole every year. Although more complicated, they are taking Obamas's year end deficit, and heaping it on to the debt at the end of the year. And then starting his deficit over with a clean slate at the start of the year.

The national debt that we have accumulated in all of history, will have increased 58% (7 trillion dollars) in only the 5 years of Obama's presidency. And you can thank Obama's yearly deficits for this.


They're related to each other, but that doesn't mean that the deficit hasn't been cut. You can cut the deficit without cutting the debt, and vice versa. I can have a huge deficit, and very little debt. Or a tiny deficit and huge debt.

While they're connected they're also separate.

Were you this passionate when Bush was spending ridiculous amounts of money and driving the debt up? The debt went from $5.6T to $10T, and publicly held debt almost doubled from $3.5T to $6T under Bush. But somehow our financial problems are Obama's fault?

Trust me, you don't have to be genius to figure where we are on spending that never is going to be pay back, because even Obama love spending, and this time he cannot blame it on wars and neither on Bush anymore.


During the first two years of Obama he could blame the deficit and debt on Bush wars, sadly no anymore, now the debt and the deficit is all Obama.


I'm not saying that it isn't his fault. But people act so outraged over Obama's spending, when Bush pushed the debt up over $4T in his term. But you never hear about that.


They're related to each other, but that doesn't mean that the deficit hasn't been cut. You can cut the deficit without cutting the debt, and vice versa. I can have a huge deficit, and very little debt. Or a tiny deficit and huge debt.

While they're connected they're also separate.

Were you this passionate when Bush was spending ridiculous amounts of money and driving the debt up? The debt went from $5.6T to $10T, and publicly held debt almost doubled from $3.5T to $6T under Bush. But somehow our financial problems are Obama's fault?


Was I as passionate about Bush's spending? You bet your sweet bottom I was.

As for cutting the deficit, perhaps Obama should say what it has been cut from vs. a deceiving general statement. You have to admit, the omission of information is just as good as lying. This way we and others can have this very same argument as to whether he was lying or not.

Was it half of any other presidents deficit? No in fact it will be nearly double of the highest deficit ever held by a previous president.

What is happening here is that Obama is comparing his spending to his own, which was outrageously high in the first 4 years.


But a cut is a cut. If you spent $3000 on credit cards the first four years you had them, but then dropped it to $1300, didn't you cut your spending, and cut your deficit? What's the difference? It doesn't matter if he's comparing it to his own spending, it's still a cut.

The deficit gets added to the debt. End of story. If he really wanted to impress me- he wouldnt have a deficit, or a very low deficit number, that way- the debt wouldnt rise.

But his crew likes to play word games and not point out the obvious that this president is not very
good at managing the countries money or priorities. He spends peoples money like a 25 year old woman would married to a 85 year old billionaire on the verge of death.

Im not the greatest at math-Im decent- but this is simple addition and subtration here people.

You cant just ignore the problems and not place blame where blame is due.

and please- stop with the Bush sidestepping- its getting really pathetic. If only you could be so vocal about Obama as you were Bush- then maybe people might take you more seriously. People are not as stupid as you hope that they are.

There, I said it. I'm not an Obama supporter by any stretch of the imagination. But debt and deficit are two different things. And no matter how you slice it, under Bush the debt went from just under $6T to $10T, and there wasn't nearly as much outrage.