posted on Oct, 15 2013 @ 07:21 PM
link
well i saw this tonight on the nbc nightly news and thought it quite interesting. the report was about how the country's people political ideology is shaped, they say it's not just red and blue.
i watched the report. then i took the test.

man was i surprised. i kind half way expected to be a pickup populist, turned out i'm a whatever man.


here's the link to the report and test. both links on the same page. just under the news banner report is center test at the end.
try it and see if you fit where you thought you did.
Red-blue division isn’t so black and white

well i watched the report, and see that the whatever man group are cynicall, well that's me after all.


ETA: here is a companion article to the test.
13 Things That Define the New American Center 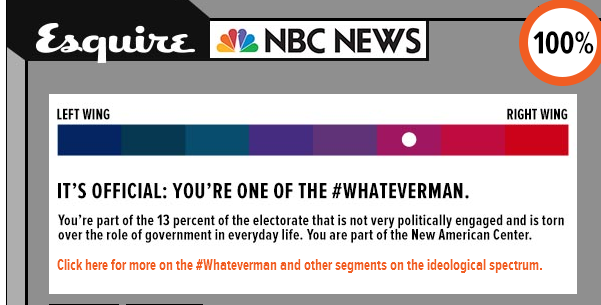 
i always thought of myself as a hardline republican, almost to the point of being a right wing whacko.
guess my younger days, have kept me from leaning to far to the right. cause back then it was party time.


As usual, my little dot on the spectrum is fighting to get off of the right-hand side. It can't go any further.

And here I thought I was more centrist-right.

(as I'm writing this, I'm smoking a cigar rolled by immigrant children in a sweatshop and throwing pennies at poor people so they will dance for me)

beezzer
I pegged the meter on the right.

And here I thought I was more centrist-right.

(as I'm writing this, I'm smoking a cigar rolled by immigrant children in a sweatshop and throwing pennies at poor people so they will dance for me)

You can just throw buttons actually.


i always knew you were a right winger. i agree with a lot of what you say in these threads.

i would have thought i would been a right winger too.
edit on 15-10-2013 by hounddoghowlie because: (no reason given)

Not a big surprise...even though I know some questions I answered that are in direct conflict with liberalism.

posted on Oct, 15 2013 @ 09:21 PM
link
I can't even answer these questions. I'm "none of the above" (or along those lines) for almost everything, because the premises of the questions goad me into accepting something that is false or irrelevant in order to answer them. A useful thought manipulation method.

And then of course I do my best with the questions and end up being pinned to the right. I sincerely hope no one is using this data in planning their policy agendas.


The John_Rodger_Cornman Show. All things right wing. you are not the new center.
maybe you can give rush a run for his money, i know you could beat alex no sweat.

Ahhhh..... Still safely conservative. Whew... That was a close one. I answered more than I thought in the center area.

I feel better now and can sleep well, knowing that. All is right with the world after all.


That was a close one. I answered more than I thought in the center area.

i wondered if any one would catch that. i took a pscyh evail one time that was set up like this, it's not hard to manipulate the results.

if you know what you want the outcome to be.

Yup - Even though I answered as a conservative on a few issues (privacy, freedom of choice) it pegged me as a "bleeding heart"
edit on 16-10-2013 by Evil_Santa because: (no reason given)


Nice to meet you! I got the same result. Go figure... getting labeled as a radio head should be an honor! You were born with an inner moral compass. Not a sense of entitlement who thinks everything in life should be free! The people who landed on the left expect an entitled life for doing nothing.


Nice to meet you! I got the same result. Go figure... getting labeled as a radio head should be an honor! You were born with an inner moral compass. Not a sense of entitlement who thinks everything in life should be free! The people who landed on the left expect an entitled life for doing nothing.


Ya know, i landed on the left because for 4 years of my life one of my best friends, and romantic partners was a woman from Belgium and we discussed the extreme differences between our cultures, government and societies often.

I think that anyone who applies themselves in this nation has the opportunity to succeed, the problem is that a lot of people are born into a situation that they'll never get a chance to get out of because their access to a great education or because of a disability.

Eduction - In Belgium to teach at the high school level a person needs their masters in the subject that they're teaching, not some panzy 4-yr educators degree and a teaching certification like here in the US. This is enabled by them having socialized education and the cost of her advanced degrees (yes mathmatics) per year was 500 euros. Their citizens enter the workforce with almost no student loan debt, and significantly more educated then the average American. Just how many millions of Americans are stuck in low-end jobs that they never move beyond manager of a McD's or similar because they were never challenged, or exposed, to such a life? Likewise, how many believe that it's beyond their reach forever. My guess is you would find a lot of people that come from the ghetto that feel this way, and is why they feel entitled to something, even though they don't contribute much to society. And yes, i get pissed at the gas station attendants who have issues counting every single day that i'm in that store. "Oh that's great you know how to subtract 10 from your birth year and figure out how old i am, but you just gave me back two extra dollars," or "Look dude, the pattern you have of the dimes, that's 8*5 = 40 dimes = $4.00. You should have learned this in 2nd grade multiplication tables..." (Both of those happened to me last week with the current early 20's that work there)

Healthcare - In Belgium they have socialized medicine. In America we have socialized emergency medicine. This is like running a car, never doing any maintenance on it and then only taking it to the shop when the engine blows up, and putting that bill back on the people of the US. This is a stupid system and one that needs fixing badly. There's a lot of reasons why people in the US feel that it shouldn't be a government run institution, but frankly - our Doctors are graduating med school with an average of $250,000 in student loan debt, so (See the previous paragraph) they need to recoup their education costs, and non-payments from other customers, and pay a bunch of middlemen in insurance companies. How much cheaper do you think an office visit would be if the doctor's staff didn't have to spend hours on the phone with an insurance company, begging for them to cover what they said they would cover? Thus the cost of a procedure that costs ~$3,000 anywhere else in the world, costs ~$8,000 here in the states. That's a seriously broken system.

So how many people fall through the cracks because of a poor education, and/or access to poor healthcare? There could be the next Einstein out there who get sick, goes into a coma and never is able to apply their skills/talent to help out the nation. Personally I see things in the aspect of a bigger picture, where I may not be the best at something, but will happily pay for someone else to become the best if it benefits myself - which is what I believe the heart of socialized systems are. Yes there's corruption, people who suckle on the system, but there always will be those people, always. The average person wants to make something with their life but in our current systems that's becoming more and more impossible.
edit on 16-10-2013 by Evil_Santa because: (no reason given)


I got a Bleeding heart, but then I'm from a European liberal country, not a god fearing Christian conservative one.