Thats EXACTLY whats going on!!
The Dems will let it shut down then blame the Republicans


Tell the dems to drop the ACA as the nation CANNOT AFFORD IT!!!

"The shutdown is the Democrats fault! They're making us shut down the government! We don't have any choice!"

This would be like a rapist claiming that their victim made them perform the rape.

"They forced me to rape them! I couldn't help myself! It's their fault they got raped!"

Or it would be like going into a building and holding everyone hostage, then blaming the police outside for the hostage situation.

"The police made me take these hostages! It's their fault that these people are being held hostage!"

This is nothing more than a thinly veiled attempt at reverse psychology. How many times does a hostage taker win? The GOP/Republicans/Tea Party people need to stop this hostage situation and come out with their hands up. The ONUS is on them, not the Democrats/White house -- the Tea Party started the shut down in the first place.

You can fart and try and point at the dog, but we all knew who really farted.
edit on 15-10-2013 by MystikMushroom because: (no reason given)


But is not affordable!
2nd

posted on Oct, 15 2013 @ 02:20 PM
link
This is rubbish. Imagine if this were you or i.
Oh i dont have any money and my credit cards are overdrawn. But darn it i really want to buy that maserati. I need another credit card or i will burn down the world.


You can fart and try and point at the dog, but we all knew who really farted.


It isn't so much like a farting contest as it is a dance though, the tango specifically.
It takes two to tango, and the Senate is sitting in a chair in the corner.


Couldn't have said it better. Tired of hearing about it. Wish they'd shut the entire government down for a few years. Go back to the drawing board and get it right this time. A friend of mine actually said "I wish George Bush were president". I hated GDUBYA but OMG Id take him + stupid to get rid of the idiot we got running things now.


The House Republicans released the details of their new proposal.

The Democrats don't have to wait for it to officially be introduced as a bill before they call it out for what it is...and that is crap.

The Senate Democrats and Republicans got together and BIPARTISANLY came up with a solution...but the House REPUBLICANS won't consider it. They only want the solution that only a small minority of House Republicans put forth.

Boehner has had a bill in the House since this entire thing started sitting to the side waiting for a vote...a bill that enough House Republicans openly supported and said they would vote for that ensured it's passage...but he won't bring that bill up for a vote. Instead, they passed a rule change the night before the shutdown to ensure that no one else besides Eric Cantor or John Boehner can bring up a bill for a vote...effectively shutting out the House Democrats AND the rest of the House Republicans.


People can try all they want, but the Republicans are taking all the blame for this...not even Fox News can help them...they have had Republican after Republican on their shows saying how this needs to stop, that Ted Cruz had a horrible (read: NONE) strategy and got them into a huge mess with no way out of it.

This is all a pre-planned facade.

The United States Government WANTS to have totalitarianism. Bush Jr set up the game rules during his term in office, all those executive orders placing power into the hands of the president in the event of a national crisis.

Well guess what? An economic collapse is just the sort of thing that the president could declare a national crisis. Everything done "for your safety"

The government could end this any second they feel like it, you have instead both parties blaming the other side for the same exact reasons, like it was all rehearsed and everyone is just following script. Either way they play this thing, they win.

If the government default the USD, they can declare a national state of emergency and bam, totalitarianism.

On the other hand, if they miraculously come up with a budget plan and raise the debt ceiling they will come on television and declare how they "saved the global economy" and all the morons in the mass public will eat that BS up.

You're correct. The Democrats caved in late 2009 and went with the exchange system because it was an election year and the Dems in moderate districts were afraid that they wouldn't get re-elected if they passed a single-payer system.

However, in 2008 when the voters voted, they voted in Obama to change healthcare. This wasn't possible for most of the congressional season though because Sen. Kennedy died and Sen. Franklin wasn't officially elected until late 2009 due to his positing being tied up in recount limbo. They didn't have the super-majority they needed and when they finally got it, they were under time constraints.

Then Fox News came in spread a landslide of propaganda that single-payer = nazism. Thus, my previous statement on Dems in moderate districts caving and the current situation with the ACA.

The ACA does do a lot of great things though that most people keep ignoring, like the mandate that 80% of income generated by insurance plans, must be paid out for medical expenses and removing the concept of a pre-existing condition. When a 6 month baby is diagnosed with asthma and dropped from his insurance due to it being "pre-existing" that's a ****ing problem.

This recent bill was nothing different then what the TP has been crying for this whole time - a way to stop the ACA, but no. You don't get that from us. It has growing pains to go through, but it's necessary for our country to start moving forward to catch up with the rest of the world in regards to healthcare. Is it ideal? No, but you wouldn't let us have the ideal solution.

They want to negotiate? Then put it on paper that we'll get a single-payer system out oft his gridlock. That's the only negotiation tactic any left-leaning person in this nation will accept. Otherwise I'll be happy to see our country's financial system burnt to the ground. At least it will be on-par with the education and healthcare systems that the GOP pushed for. 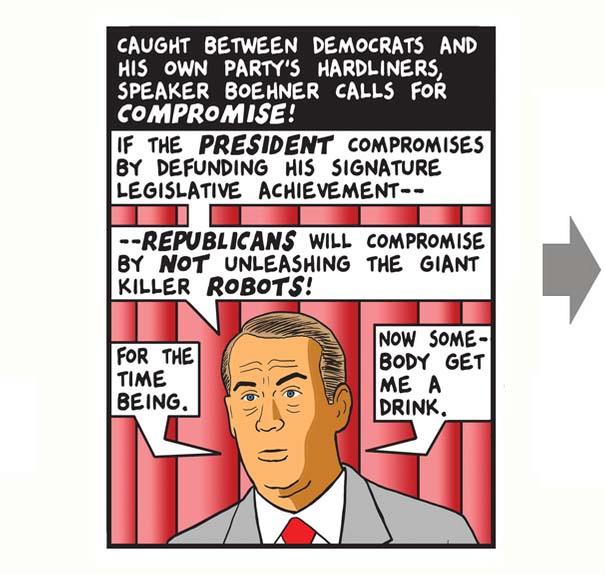 The minute all 3 branches of government (Legislative, Executive and Judicial) cede power to minority faction throwing a temper tantrum and demanding to scuttle democratically enacted laws, voted on and passed by both houses of the peoples representatives, signed by the President and upheld by the Supreme Court..affirmed through two presidential elections...the minute we cede the checks and balances and the will of the people...then the country is already gone, we become a 3rd world failed democracy. Eff the GOP for demanding the same.

And if your issue is with the "before" bit...Boehner floated the idea and everyone...Senate, Pres AND HIS OWN GOP CAUCUS shot it down.

That's why he floated it...to show the TP Caucus it wasn't going to work.

posted on Oct, 15 2013 @ 04:50 PM
link
We can play semantics and technical games about men who follow the law only when it suits them, or we can be pragmatic and realistic here.

When lesser nations have done this, it's called the beginning of their end until intervention by outside world powers...with or without the nation's permission.

It's happened time and again. For awhile there, it almost seemed to be getting a little too routine as corrections came all over the world in the early 90's.

That brick wall is sitting right there ..and to say it's Boehner's fault more than Obama's OR the other way around for anything less than a very equal 50/50 peeing contest between the overall leadership of both parties? Well, that's just playing right into their hands for controllable citizens who salivate on the chime with more reliability than Pavlov's canine pal.

Whatever brought it to this point? WHO CARES... By 72 hours without resolution, NO ONE will give a damn what caused it to get here.......but WHY they didn't STOP BICKERING before we hit the wall at highway speed.

Just a couple days away.....for a VERY near miss ..or? It's been a great run while we had a Great nation.