Look it's the Native American Al Jolson in blackface. He is not a Chief in any way if anything he is a disgrace.

I knew some couldn't deal with it.

As someone with Sioux heritage, I couldn't agree with the OP more. Definitely need to remove that offensive "Washington" portion from the team name!


Whatever. Enjoy the gloat. It's included with your meal.

I am often left reading responses wondering what the hell are they talking about.....did they post in the wrong thread. Good one.

posted on Oct, 14 2013 @ 06:40 PM
link
Great idea. Drop Washington from the Redskins name. It's not like their called the South Texas Illegals or the Texas Wetbacks. Next thing they will attack is the little kids leagues across America.

Auricom
I hate overly PC crap. I think it hurts more than it helps. However, that doesn't change the fact that they have a point. 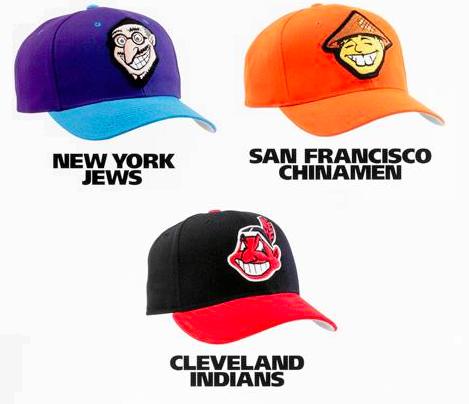 I for one like the name. I don't find it offensive, but I'm not Native Indian either.

I think these examples are unfortunate.

The New York Jews? Is that really a Team?

I can see that ending up in court...

YOU have made me a better man today. And I am thankful to have learned such a valuable lesson in good fun.


Congratulations, star well earned, for you have proved yet another important fact, namely;
'LOOK BEFORE YOU LEAP', surprised how many leaped and then read your word's in full, have a nice day now.


Its the pussification of america. What's next? I'm a white boy and the name Chicago "white Sox" offends me. Must these p.c. people ruin everything? I live in the south and can't even fly a confederate flag to show my southern pride without being labeled a redneck racist. Whatever tho. No worries. I'm a middle-class blue collar white male trying to support a beautiful wife and two awesome kids.

Lets just change anything that offends anyone to the white/Caucasian version of it, Call them the Rednecks, we wont flinch.

whyamIhere
That's right it is downright disgraceful they continue to use the name.

The name stands for everything bad about America.

I personally get offended ever single time I hear their name.

I almost get sick. I taste throw-up in my mouth just thinking about it.

Please change the name. I can't take it. It's beyond disrespectful.

You must drop that no good word "Washington" from your name.

Hail to the Redskins...


That was so awesome.

You rock hard core WhyamIhere.
You just do.


Being on the second page, I think it safe to say that I find it scary to have a MODERATOR who don't read the post to the end... YIKES!!!

And scary to see how many people, even most respected ones here, who don't read to the end...

I wonder if one could make a second thread inside another one, thread I mean?...
edit on 14-10-2013 by NowanKenubi because: klarifikation!

posted on Oct, 14 2013 @ 09:10 PM
link
Back in the early 2000s the University of Northern Colorado had an intramural basketball team called the Fighting White guys.

I thought it was hilarious. I guess it was meant to be insulting but to be honest I've been hearing what an evil POS I am for 40 years. As an employed, taxpaying, straight, white, conservative, Christian male I'm among the most hated demographics on the planet and I'm rarely allowed to forget it for more than a few minutes. Especially in the USA.

Why in the world would I care if someone named a basketball team after white people?

I do find the name Dallas Cowboys to be insulting though.

You do get upset a lot. Can't be good for you.

Chief Zee has been the unofficial mascot of the Redskins for 35 years, he's well loved. His name is Zema Williams. Your crack about Al Jolson and blackface is unnecessary and insulting. That's his real skin.

Ease up a little.

Auricom
I hate overly PC crap. I think it hurts more than it helps. However, that doesn't change the fact that they have a point.

I for one like the name. I don't find it offensive, but I'm not Native Indian either.


Thank you. It has always been offensive to me and my family. We are not a cartoon character either.