CHENNAI: India has detained an armed ship operated by a US maritime security company and the 35 people on board for failing to produce papers authorizing it to carry weapons and ammunition in Indian waters, the coast guard said on Sunday.

Coast Guard commandant Anand Kumar said the ship was stopped on Friday and was being held in the port of Tuticorin along with its 10 crew and 25 armed security guards until required documentation is submitted.

The southern tip of India is close to major trading routes from Asia to Europe. Many cargo ships now travel with armed guards to deter pirates. Sri Lanka, close to Tuticorin, is a popular boarding point for private armed guards.

"At the moment the documents are still awaited," Kumar told Reuters. "We have to see how valid are the documents that they do produce towards their entry into Indian waters and carrying arms and ammunitions."

The Sierra Leone-flagged ship Seaman Guard Ohio belongs to Virginia-based AdvanFort, a maritime security firm that specializes in anti-piracy operations. AdvanFort and the US consulate in Chennai were not immediately available for comment.

Kumar said the ship was approached and detained on Friday night. He said authorities had been assured they would receive documentation within an hour of the detention, but that 24 hours later the ship's master had still not produced them.

In February last year, two Indian fishermen were allegedly shot dead by two Italian marines serving as security guards on an Italian-flagged oil tanker off the Kerala coast. The marines are currently being prosecuted in India.

The incident highlighted the loosely-regulated practice of placing private and military armed guards on ships for protection against pirate attacks.

Pirate attacks cost billions of dollars every year - as much as $5.7-6.1 billion in 2012, according to The Oceans Beyond Piracy advocacy group.


Interesting.... could it be the weapons were heading to Syria ?
edit on 14-10-2013 by Gemwolf because: Title edited as requested

posted on Oct, 14 2013 @ 02:18 AM
link
Is it saying they were shipping srms and ammo? Or is this over there being armed security guards on board.

It goes on to talk about pirates and why armed personell were on board. Think it is refering to them
edit on 14-10-2013 by Isittruee because: (no reason given)

posted on Oct, 14 2013 @ 02:27 AM
link
The weapons they are referring to in the article are the Weapons carried by the Ships security personal.

Under UN Regulations its illegal for civilian vessels to carry armaments even a pistol or rifle. But due to the increase in piracy of the Coast of East Africa, merchant vessels have begun to hire security firm to protect their ships.

Most Pirate Activity it aimed at boarding an unarmed vessel and taking the ship and her crew and holding them for ransom. But these Pirates just like the days of old like targets that don't put up a fight. So if you can show that you are capable of repelling a boarding attempt, they pirates will turn tale and run.

Since its is still technically illegal to have armaments (weapon you can actually fire) on board, and due to the fact that some of these security companies have a shoot first ask questions later policy (which has lead to the loss of life) most nations will detain vessels that do not have authorization to have armed security personal on board.

In this case the ship in question was not authorized by the Government of India to have armed security personal on board hence why the ship has been detained.


I have to agree. I only read what was stated in the OP's quote though. But from what I read, they were upset that armed ship board security had weapons and not that they were actually shipping weapons en masse.

In summary: Nothing to do with WWIII but rather private security firms and their (lack of) weapon licenses for India. 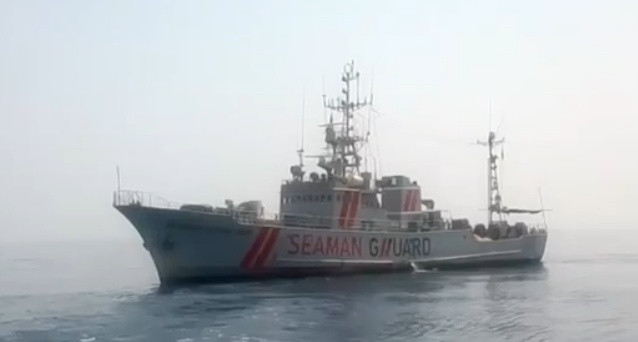 Too bad they didnt have the paperwork for it.

posted on Oct, 14 2013 @ 07:20 AM
link
There's something missing here - why would a mercenary vessel be floating around by itself? I could see a company hiring the vessel to protect merchant ships but none were mentioned. So what were they doing?
Looks like an old coast guard cutter to me. Does the US sell them when they get old?


I was looking at that and asking myself....Well, who precisely would challenge them? You ask why a lone private military contractor vessel would be out in the ocean, and that makes a fair point except that it has no reason to expect challenge from national Naval forces anywhere. Short of that? What can hurt an old Coast Guard Cutter, armed to the teeth? It is obviously being maintained as a blue water vessel so, seriously, outside a national Navy? Anyone that didn't get 100% surprise on that thing is going to be telling tales to Davy Jones by the end of the day. lol.....