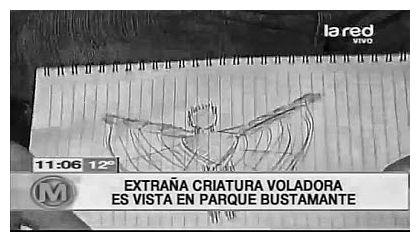 On 29 September around 21:00 hours near Bustamante Park in the downtown area, a strange flying creature was seen flying from one tree to another. Its size was estimated at around 2 meters tall and shaped like a manta ray.

Ignacio, a young man who was the privileged witness to this brief yet disconcerting flying being sighting, does not wish to disclose his identity but made his narrative available to journalist [Juan Andrés] Salfate on Canal La Red.

His description is specific, remarking that the entity had wings from the upper part of its body down to its lower part. He made a drawing of what he saw, which we present in this report.

Eyewitness testimony soon appeared in other places in Santiago. A witness named Sylvia confirmed the image of this human-looking "flying manta ray" in the Los Barrenchea Commune. Someone even stated the following by e-mail, from a location near Bustamante Park:

"My wife and I saw this creature in one of the towers of the San Francisco church in Santa Isabel, and it was eating something similar to a dog. I think that if you inspect this tower you will find its remains. Unfortunately, I have no evidence to give you beyond my wife's report and my own."

Incidents such as the above are recorded every so often in Santiago. In the Peñaloén Commune, over the past two years, IIEE has managed to secure similar accounts. Furthermore, we recall deceased journalist Osvaldo Murray, who wrote about the flying men who landed in the trees of the town of Juanita Aguirre in the 1980s, including it in his book Los Seres de Luz (The Beings of Light).

It could well be a joke or a means to attract viewers to La Red's morning show and to the referenced journalist, who many times delves into "showmanship", but we could not overlook this account and our readers can follow it on the video at this link.


My bet? They saw just a bat flying away, His eyes were lighted because of the night and they got scared, making assumptions it was a flying humanoid.

And if it was the so famous mothman doing his crazy prophecies? Well, better check Chile news for any earthquakes on the next months.
edit on 9-10-2013 by Frocharocha because: (no reason given)


if it was someone on a manual flight suit, wouldn't it make a lot of noise and get everybody attention? O.o


if it was someone on a manual flight suit, wouldn't it make a lot of noise and get everybody attention? O.o

Actually, no, they are glide technology. They do not generally have propulsion systems other than arms and legs.


Makes me wonder if this is a Mothman sighting ... Gonna keep an eye to see if anything happens in the coming days or weeks.

It is a rough sketch for the Batman outfit

It is a rough sketch for the Batman outfit

You made me choke on my own saliva...

Legend had it that this creature is some sort of prophet of doom
edit on 10-10-2013 by markosity1973 because: (no reason given)


I think it is the Mothman as well.

Something horrible will happen if this is a real sighting.

posted on Oct, 11 2013 @ 12:54 AM
link
I doubt it's a person using a flying suit since that wouldn't work for flying from tree to tree... Need more altitude and speed for lift with those puppies..

I don't have a clue what they're saying though

I think it is the Mothman as well.
Something horrible will happen if this is a real sighting.

I was just thinking the same thing - it sound's exactly like the "Mothman" (Mothman on Wikipedia) phenomena.

posted on Oct, 15 2013 @ 11:03 AM
link
If it is a Mothman sighting, there should be more sightings in the next couple of weeks before some disaster strikes. Perhaps a massive earthquake and/or sinkhole or series of sinkholes.

I'll keep an eye out for big disater in that region then come back to this thread if something happens.

posted on Oct, 15 2013 @ 11:32 AM
link
Mothman hasn't been seen since the late 60's. I was just in point pleasant WV talking to locals a few weeks ago. I doubt he is appearing again after 45 years in Chili but who knows for sure.

I remember hearing some old stories of giant bats in that part of the world; maybe this is related to those? Sounds creepy, in any case. Two meters is a bit bigger than even the largest known bats, though, so getting serious investigators in there won't be easy!

Flying suit can only maintain flight in high speeds, otherwise...you're dropping down.


There has been so much strange # going on over the last couple of years alone that it has less and less impact.

No CIA agent is gonna be able to jump from tree to tree carrying a carcass "for effect". That is a disinfo FAIL. This is imo not a fruit bat..they're big..but maybe a metre long max. Not 2m. That's human sized. I have heard about dimensions and realities merging. Maybe we will see many more entities before the year is out..

Who knows what's gonna happen next.. I'm just grabbing my popcorn and enjoying the show!