A Grand Canyon Sunset During a Lightning Storm! - and the current status of the Natural Wonder.

Could not find this on the site- so I thought I'd post it for many to see.

Looks like landscape photographer Rolf Maeder got to the Grand Canyon in time before the partial gov. shutdown... to take some beautiful photographs during sunset and a lightning storm! 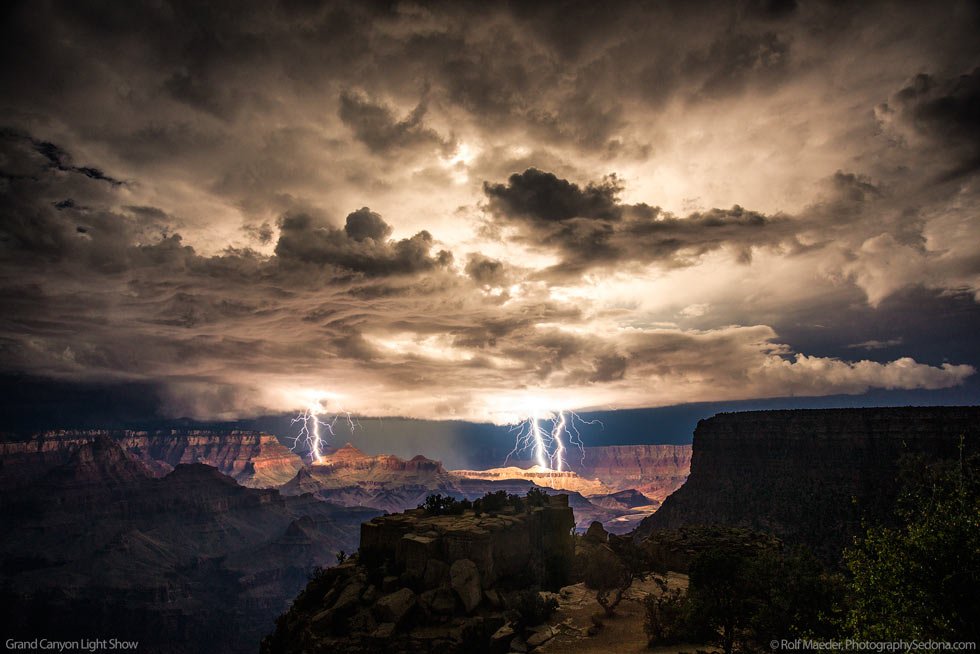 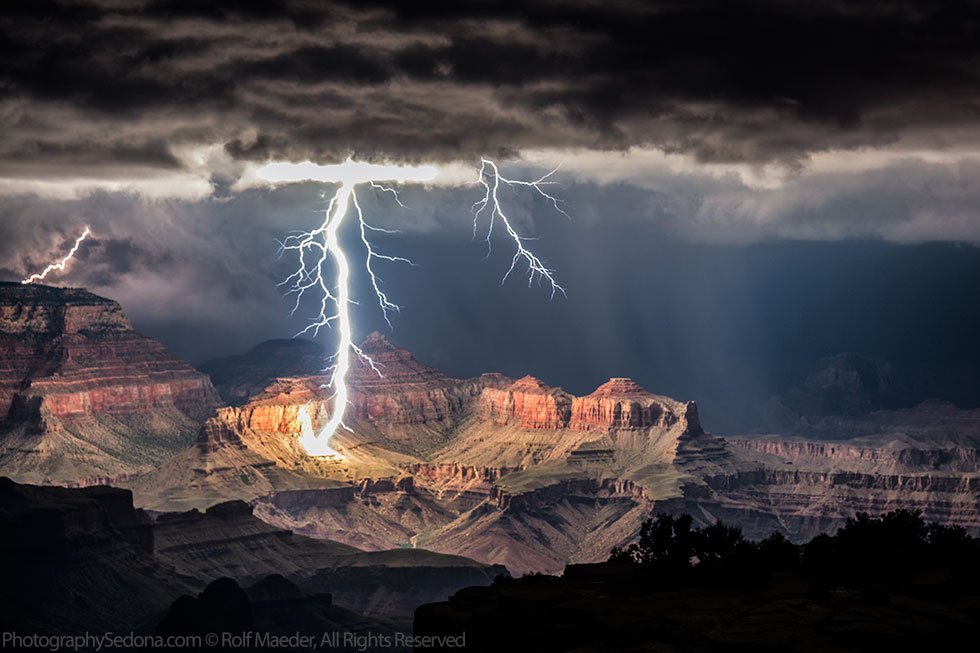 You can see the rest at this source (businessinsider.com).

And of course at Rolf Maeder's Photography website, source (photographysedona.com).

About 4.5 million tourists from around the world make the trip every year to the Grand Canyon National Park in northern Arizona, a trek that pours an estimated $1.3 million a day into nearby communities.

A little about the only previous shutdown affecting the Grand Canyon..

The shutdown that began Tuesday after Congress failed to pass a federal budget has happened once before, in 1995. That shutdown led then-Gov. Fife Symington to lead a convoy filled with Arizona National Guard troops and state parks officers to the canyon and demand its superintendent open the gates. The effort failed, but he was able to negotiate a deal where a partial reopening would be paid for by state funds. The federal government later repaid the state. The closure was the first since the park was created in 1919.

Not this time.. at least not yet. Local businesses have been pledging... and the Arizona Governor Jan Brewer has already offered to use state money to re-open the Grand Canyon, however- her offer was declined by the feds.

“I offered to reopen the Grand Canyon to visitors by using state money, but federal officials declined my offer,” Brewer said in a Facebook post. “I really shouldn’t be surprised that the Obama Administration doesn’t want Arizona’s help.”

Park authorities have issued citations for 21 tourists and visitors who entered Grand Canyon National Park after the government shutdown started. And in response — and in the face of the furlough of other workers — the park has bolstered its security team to monitor the land around the clock.

I've don't really have a strong opinion reason for the partial government shutdown..

Is this the plan?

Is this the plan? Do we agree on something, or run out of money on the 17th?

Hope everyone is having a decent October, regardless the ridiculous.


Heard! Breathtaking to say the least!


Damn, that sounds exciting! What a fun trip that must've been!


What a great set of photographs, they cheered me right up on a bit of a crap day for me. Thanks for reminding me what a fantastic planet I live on and how lucky I am to be around when we have such technology to share it

nugget1
Gorgeous pictures! It's just a crying shame what obama's 'handlers' are doing to our once great nation! I bet Karma has a very special treat for them .......

Give it a rest, this all republicans... Of course he is not going to sign anything that would mess with his signature legislation. It was passed and is law so says supreme Court. You shutdown the government because you don't like health-care reform.

Give me a frigging break and grow up. Perpetual greed politics in motion. One of the only civilized nations in the world who can't provide universal care for it's citizens. That is the first thing that makes us a higher species, the fact we respect all life and hold it sacred and we take care of the old, young, and sick, and those who can not care for themselves. As a higher form of life everyone has healthcare and it is not about how much money you have.

But I guess we are not a higher form of life, not yet, I still hold out hope that these greedy sons oh bitc$$ will one day soon be overthrown and that greed no longer rules society. I think it will take something spectacular like free energy or something like it to finally put us on the right path.

One thing you can't do, if you are an honest person is blame the shutdown on Obama. Oh and for the record, I did not vote for him.

posted on Oct, 9 2013 @ 08:48 PM
link
these are amazing pictures Ive been to the grand canyon and i loved it and to see these pictures it brings back alot of memories so thank you for sharing with us.