WTF Is That Floating Near The ISS?

posted on Oct, 8 2013 @ 09:36 AM
link
Ok, guys, here's something that'll probably make you burn scarce midnight oil! Here’s an image of the ISS. Do you notice anything strange here? Like something floating outside the ISS?

No? Ok, now check out this second pic which is the same but has been enlarged and enhanced by adding contrast and brightness. Now do you see it?

So the question is: WTF is it?

An ISS module just floating around? Which one? If it was, then why can't it be seen in the first photograph in normal mode? It's only when the image is enhanced does this object show up. And then, are modules just dumped outside to float free which could be rather dangerous? Are shadows playing tricks or is there more than meets the eye here?

And of course, it's impossible to tell the distance. Could be a few feet to a few miles. Anyway, here's the ISS as seen from the other side. No such module (If it is one) can be seen here....

Or does the ISS have disposable trash cans too? This looks like one, anyway!

But seriously, can the experts out here hazard a guess as to what this object might be? A satellite? But that argument ain’t an option as there needs to be minimum separation between space objects and the ISS. And no free floating junk that size can come so close. Space debris? The usual ‘reflection’ hypothesis?

posted on Oct, 8 2013 @ 09:40 AM
link
Dead satellite perhaps, I would imagine it is some space debris. There is a lot of junk floating around.

I suppose it could be something more enigmatic but I believe it to be space junk.

It all looks bodged up to me like photo shop.
otherwise I have no clue.

No idea what it is, maybe it's the Black Knight? It crops up everywhere, particularly on ATS!!

OrionHunterX
Anyway, here's the ISS as seen from the other side.

I know thats no answer, but it would help to know what was going on, at the date in question.

posted on Oct, 8 2013 @ 09:46 AM
link
Looks like a Borg shuttle craft to me? Little do they know, most Earthlings have been assimilated already and our Government Borgs did not even need all the high tech gadgets to make their version of the compliant hive mind!

n00bUK
Mikesingh? Guy was an ATS legend, one of a handful of members that made me join this website!

Well said buddy-same here!
He was the daddy of space anomalies,I always wondered why he stopped posting here..
I hope the MIB didn't get him.

posted on Oct, 8 2013 @ 10:00 AM
link
Here are two more images, also from the STS-100 mission.
These must have been taken within a few moments of the one in your opening post.
ALL of them, without exception, look like they've been taken through a window, with reflections. 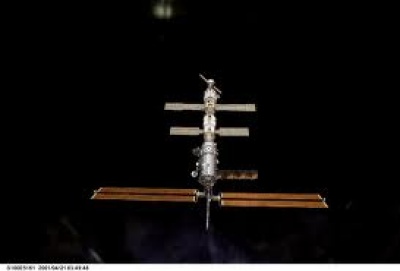 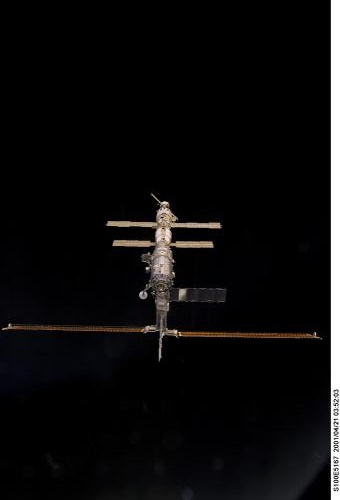 
Might that "plume" be the window frame or the earth in the background? I say window frame
Someone said Tardis......good call!


It is a possibility, although, I won't dismiss a rocket plume just yet. The edge of the earth is a better explanation.

This is interesting though. Obviously could be space junk of course but who knows. It would be great to see more/better pics.


I doubt NASA would just let a pic of an actual UFO near the ISS be released.

The picture was taken through a window. It's a refection, that would explain the plume and the "object".


Good point, can see it now, especially if you take the third picture and invert it 180 degrees. Suppose the ISS is never too far away from the earth to be included in the same "close up"

posted on Oct, 8 2013 @ 10:19 AM
link
It looks a bit like the resupply craft they use. Basically the same thing since Mir, isn't it? Now that the shuttle is retired, they have to get food and mail somehow, right?

Here are two more images, also from the STS-100 mission.
These must have been taken within a few moments of the one in your opening post.
ALL of them, without exception, look like they've been taken through a window, with reflections.

I have to agree it is from the shuttle window and is a reflection.