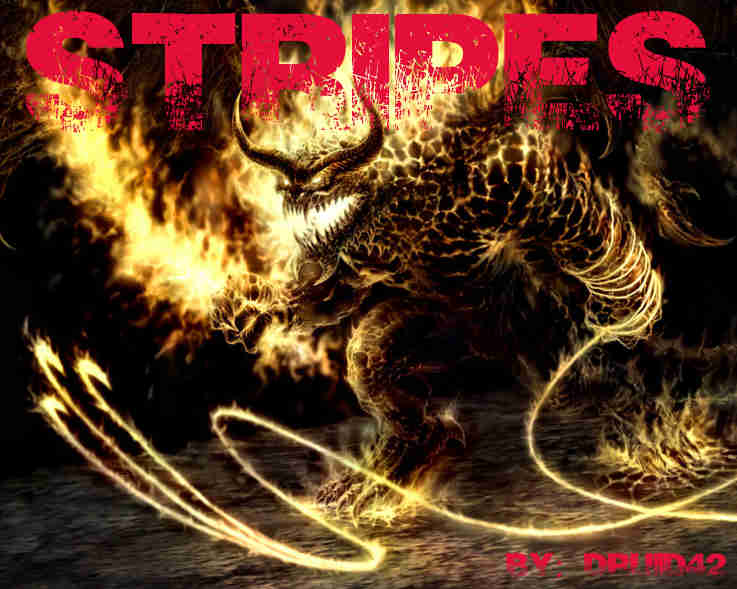 Sulfur tainted smoke permeated the room. The groans of lost souls provided a constant symphony of noise, contrasted by the occasional shriek of pure pain unleashed. This was hell.

I found myself shackled here, my own personal demon threatening me. The whip snapped close to my ear, my breath drawing in sharply, acrid fumes causing me to cough, and want to stand.

“Get down,” it snarled at me, “or else.” The threat lay hollow on my ears as my lungs strained for fresh air. I tried to rise, unfamiliar with my surroundings.

The whip came quick against my back, the pain sublime, as I fell back to my knees, humbled, feeling moisture draw from the taste of the demon’s device. Blood. One stripe, oozing slowly.

I felt helpless, without hope. The fiend fed upon my despair, and chuckled, leaning back for another lash. It came, and my body quivered from the pain, forcing me to grit my teeth against the agony, two stripes now, oozing blood. Demonic laughter filled the air, apparent that my sole tormentor was being joined by others. Was I such that sport, requiring such attention? I had no idea as I prepared for the worse.

My demon leaned close to my ear, his filthy stench filling my nostrils, drool dripping on the ground, while he taunted me. “You’re a worm, human. Look at you.”

He strode around me, defiantly, while his band of cohorts cackled heinously in the background of my hazy conscious.

I struggled against my bonds in disagreement silently, which brought a round of demonic laughter. The whip sung out again, and I collapsed from the pain, three stripes in.

The demon cackled heinously as he ran his hand over the torn flesh on my back, joined by his minions as they licked his bloody fingers clean. The frenzy built around me, imps and dervils pinching my skin, waiting for a tasty bite after I was finished.

I closed my eyes. The pain didn’t leave, but I shut out the noise. Hell sensed my distraction, and brought me back with another lash across my back, breaking my concentration. Collapsed on the floor, four stripes in, my personal demon grabbed my chin and lifted me up to look into it’s face. Rudely, it ran it’s thick slobbery tongue across my face, with howls of pleasure produced by it’s cohorts, and it smacked it lips with satisfaction, while I lay in pain once more upon the floor once released.

Without strength, without desire, I was beaten. I knew that. THEY knew that.

I tried to stand, but my shackles held me down. A trick. I was never supposed to win.

Resigned, the hoard closed in, and through my last fading thoughts of agony, I realized that giving in was no shame at all.


That's was really good. I could see it all in my mind.
*thumbs up*
Good luck

Dark night of the soul.

No happy ending for Halloween.

Demons can be so demonding.

posted on Oct, 7 2013 @ 08:33 PM
link
THANKS for the comments. I'll be making my rounds for those that have stories as well, to reciprocate.