The Park Service appears to be closing streets on mere whim and caprice. The rangers even closed the parking lot at Mount Vernon, where the plantation home of George Washington is a favorite tourist destination. That was after they barred the new World War II Memorial on the Mall to veterans of World War II. But the government does not own Mount Vernon; it is privately owned by the Mount Vernon Ladies' Association. The ladies bought it years ago to preserve it as a national memorial. The feds closed access to the parking lots this week, even though the lots are jointly owned with the Mount Vernon ladies. The rangers are from the government, and they’re only here to help.

“It’s a cheap way to deal with the situation,” an angry Park Service ranger in Washington says of the harassment. “We’ve been told to make life as difficult for people as we can. It’s disgusting.”

Wow even the Indians are getting fed up with Chief Walking Bird's lackeys. (bird who can not fly because he is full of it)
www.washingtontimes.com...

We have allot of threads running about the government shut down....An I have not read them all so forgive me if this has been posted before... What I found heartening was the reported statement by the park ranger.

Yep he is doing his job but it is leaving a bad taste in his mouth and who knows, maybe just maybe, he and others might decide to just say screw it and walk off the job or turn a blind eye so to speak.... Well one can hope can't they?

Without loyal followers/enforcers no government has power over anything or anyone....
Other side of the coin; nothing will happen and the U.S. will muddle through this as they have muddled through other muddles... and when it is all over TPTB can all pat themselves on the back.
I have been having the old saying running like a broken record through my mind; "Never let a good crisis go to waste".

Make it as bad as you can "torpedoes be damned" as long as the goal is reached seems to be the ship of states course at this stage. Games and more games to sway the masses. I have to agree with the Ranger, "Disgusting"! 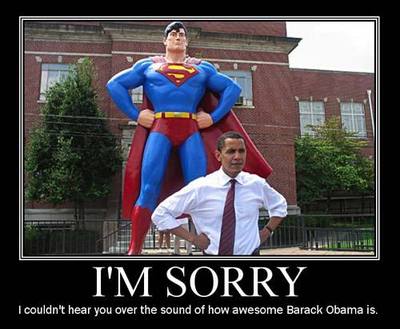 Did you say something?

Hope has become change and change has become pain. I wonder if they can spare a little change for Vaseline? Oh.. wait.. that's a petroleum product, huh? Better make that some paper money. Coin won't do. Err...

The Interior Department is part of the Presidents Cabinet.

They are all Federal Legions.

We *know* by simple deductive reasoning this is *all* coming from the White House.

The White House is unraveling and is desperate.

They will use any and all available tactics to enforce their principals and agendas.


I would like to see Reid and his majority unravel, myself... If congress passes a bill and Reid will not even let it come to the floor of the Senate to be voted on then (yes I know it happens all the time regardless of party) as far as I am concerned it is obstructionism and the welfare of the nation plays second fiddle to some party line... .


But now for the good news. People are standing up to this tyrannical regime.


I have to wonder why the Dem's are so hatful. Is this what they do when they are scared or are liberals just naturally hatful and divisive.

What really scars me if Obama is going to fundamentally change this country, are they going to be this mean and hateful if people don't agree with them all the time ?

Why in the he** would anyone want another Democratic president if this is what we can expect , do people really like the way this country is now..........I'm talking people from all sides, how long can this hate fest go on before it all ends very bad ??
edit on 4-10-2013 by Battleline because: (no reason given)

posted on Oct, 4 2013 @ 07:09 PM
link
What we need is to treat the federal government, like the Italians treat the college of Cardinals. Lock them into the office, do not let them out, turn off the power and water, and simply tell them that they are not allowed to leave or do anything until they come to a form of common sense, or it may require that the We the People raise up and converge on DC and force an issue that the federal government does not want.

The really sad part of this entire state of affairs in the US, is that it is making the federal government into a joke.

posted on Oct, 4 2013 @ 08:10 PM
link
Here's the skinney on this ....
We're in the end times ....it is supposed to be like this...you know, logic has left the building.....Did you know the Scripture states that people living in the end time will have NO EXCUSE...for not knowing it. In the dad gum Holy Scripture

posted on Oct, 5 2013 @ 06:58 AM
link
I find it funny, watching all this from afar, and the back and forth theatrics in what has become another Dems V Repubs partisan dog and pony show.

Do people really think the Repubs are gonna rush in and save them all? I think not as they are all in this together, up to their eyeballs. In short, both groups have their marching orders from on high and all of this is just for public consumption. The bottom line is that ALL of them need to go for there to be any change and a return to government for the people, and by the people.
This latest farce is there to keep the people divided and to show division between the main parties, when in fact they are all in lockstep when it comes to screwing the people for their own gratification and feeling of power and superiority.

When the government has the authority to create and issue currency, debt free, into circulation, why do they insist on borrowing from a private banking cartel at interest, and creating ever increasing debt that is pushed onto the people? I think that alone shows who runs things, and it sure aint Obama or his predecessors!

xuenchen
The Park Service is part of the Interior Department.

The Interior Department is part of the Presidents Cabinet.

They are all Federal Legions.

We *know* by simple deductive reasoning this is *all* coming from the White House.

The White House is unraveling and is desperate.

They will use any and all available tactics to enforce their principals and agendas.


Interestingly, so did the IRS scandal originate from the WH. A man who dared object to an O plan in front of him at a meeting got a visit from them shortly afterwards.

posted on Oct, 5 2013 @ 07:25 AM
link
Aren't you guys supposed to be liberating a country somewhere?
Oh wait that was last week
Shutting down a national park ,well thats just crazy, who is going to feed all the little critters?

12voltz
Aren't you guys supposed to be liberating a country somewhere?
Oh wait that was last week
Shutting down a national park ,well thats just crazy, who is going to feed all the little critters?


Most of the American critters are self reliant and need no outside interference from a well meaning handout.... The critters that get used to the handouts unfortunately get killed in many cases.

Nawh, I think the country is just about liberated out of liberating for the moment. It seems the government is more focused on liberating the citizens from their money while taking all the fun out of it. Give us a month or two and the war drums will start to come out of hiding once again.....