Pulsating Rainbows & Holes In The Sky

This afternoon I was visiting my mother and we were going down the road to get some milk before we headed back to her house. I am always one to keep my eyes on the skies because one never knows what you might see and with all the meteor sightings lately and my living in an area reporting those sightings I am in eagle eye mode.

So I am looking and I see a rainbow that is not a regular rainbow. I called it a sky rainbow because it was just in the clouds. There was no arc. It was not coming down to the ground... it was just floating overhead. I remarked on it to my mother and trying to get her to look when the "rainbow" changes. A white light appears to grow in the middle of the "rainbow" that made it appear as if someone had cut a hole into the blue sky and there was nothing but white light behind it. It is hard to describe it, as it looked 3D enough to see beyond the blue part of the sky to the white light behind it with space in between.

So I am pointing and telling her to look and she pulls into a store parking lot so she can see what I am talking about. It appears the same way to her. As we are several minutes into watching it, the light seems to pulsate. The colors change. Sometimes it lengthens or widens or both. It pulsates a bright pink, red, yellow, a bluish purple, to green. Not in that order and not all separately. Sometimes they were combined. So we continue to watch as it starts to get smaller. It disappears in the same manner that the picture on a really old tv used to. It just gets smaller and smaller until it is just gone.

We were discussing what it could have been when it appeared again all the way on the other side of the sky. It behaved the exact same way. Both lasted about 10 minutes a piece. We got home and I tried to search for something similar online but didn't even know what to google to start out with. I am in my 30's and my mom is in her 60's and neither of us have seen anything like this before. I really just kept waiting for something to come out of the "hole" the white light was coming out of. Maybe the Kraken, maybe a disgruntled leprechaun... I am not sure.

I would just really like to know what this phenomenon is so I can know what I saw. I know it sounds nutty but I can not be the only person who has ever seen something like that. I am sure it occurs, I just have never experienced it. If anybody knows what it was it has to be someone on here and I would greatly appreciate any help in naming this "floating rainbow".
edit on 9/29/2013 by Kangaruex4Ewe because: (no reason given)


Take a look at some of my videos 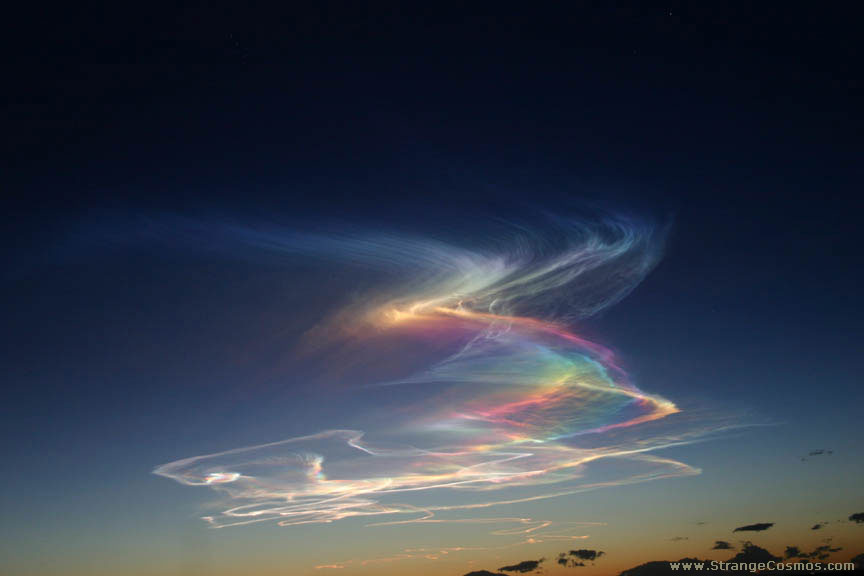 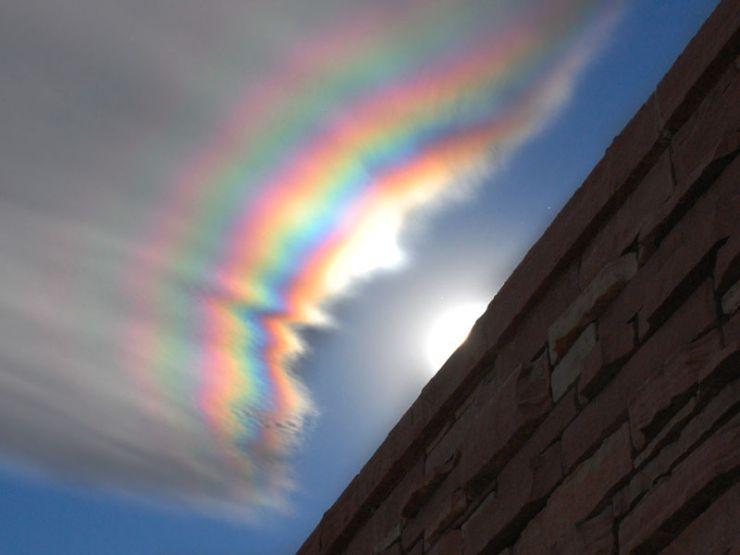 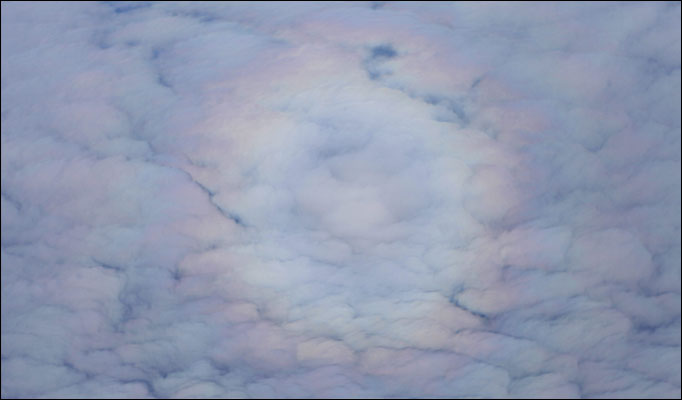 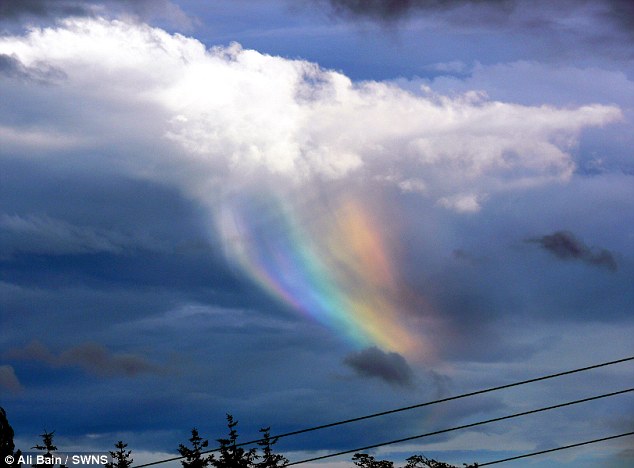 
Your first video is the closest to what I saw! The sun was a good distance from it though and the lights were pulsating like a heart beat. Yours may have been pulsating too and I just couldn't see it on the video. It's certainly beautiful regardless. Do you know exactly what it is called? I thank you for your videos as well. I knew others had to have seen similar.


Hi Cheesy. Those are very close to what I saw! In your and Staroth's videos it is weird how the clouds have that same distinct texture. The clouds were like that here when this occurred and I remarked how they kind of reminded me of spider webs clumped together.

I live in VA and earthquakes are extremely rare here in my area. I hope it stays that way too. Though it would be interesting if one did happen after this. Nature is freaky sometimes!

posted on Sep, 29 2013 @ 10:07 PM
link
It's hard to know exactly what you saw, but there are several possible candidates - mock suns, solar halos, sun pillars, iridescence in clouds. Some examples and explanations at these sites:

I've done a bit of googling some seem to think they are a sign of earth quake, some sites are calling the "fire rainbows".

Some sites are claiming them to be a rare. Idk if they are or I've just started noticing them. The 3 I've seen on different days all seem to be about the same time of day and in the same area.

Here's one link with a bit of info


I knew it would be hard for people to know what I was talking about and I would have paid to have had a camera with me to take a pic of it so it would make identifying it easier. My smartphone died leaving me with nothing. Go figure. I have never needed a camera and when I do.... I don't have one. At least it wasn't a UFO and I was caught with no pics.

I am still going through your links (Thanks so much) and am enjoying all the cloud pics they have to offer. I will be able to spend some good time there for sure.


Thank you!! I have heard the term "fire rainbow" before, but wasn't quite sure what it was. It seems like the phenomenon goes by a few different names from what I can gather through all the links. I wish everyone could see one in person as it is beautiful. I will definitely be on the lookout for more. I hope you did not get earthquakes after you saw those few you did. That would kind of take away from the beauty a bit I think.

posted on Sep, 29 2013 @ 10:33 PM
link
I worked outside a lot with my profession and have not seen as many weird things in the sky as I have in the last three years. The amount of beautiful sunsets the last two summers is more than I have seen total in my life. That is strange, it's kind of pretty though.

I have also seen more halos around the sun in the last three years than I did in the previous twenty years. Seeing one once a year or so when working outside is usual, I have seen probably ten in the last three years. I was trying to find why they were occurring so often about a year and a half or more ago but I guess it is just because of the solar max.
edit on 29-9-2013 by rickymouse because: (no reason given)


The are beautiful and pleased to report no quake after. We get the odd earth tremor that can go nearly unnoticed. But these are very far & few between anyway in this part of the world.

I am leaning towards the idea that it has something to do with position of the sun in the sky and weather and all that. As I said the 3 I seen were all around the same time of day in same part of sky.

I actually took a few pics, but deleted them off my phone after searching around the net. It seemed to be not much of an unusal event. I do hope to see more of it though


I imagine you have seen a lot. I agree that it seems strange things are occurring more frequently these days as well, but then we are taught to try to talk ourselves out of feeling that way. There is always someone standing there saying things happen daily and you just haven't noticed it. Go figure. If you are like me you kind of get that feeling in your gut that some things are different or things are happening more often than usual. I tend to go with my gut as it hasn't led me wrong yet.

Not everything leads to the end of the world of course and I think that is what most people assume you are thinking when you make a comment about odd things occurring more frequently.

It looks like we are all on this ride together regardless of where it takes us or where our stop is. I imagine some of us will notice more things than others do. Hopefully more of them will be as beautiful as what I saw today.

As far as why their there, perhaps they are occuring because of high humidity, or increased moisture. Rainbows are only really around when there's moisture around. So more moisture may be accumulating in the sky rather than on the ground. And obviously when you see a rainbow like sighting, it's because of water having light pass through it. And it creates a prism like array of colors.

Also, it appears that all of the images shown have clouds in them, or around them. And all a cloud really is is condensed water vapor floating around. So it would make sense why these sightings are taking place in the sky around clouds.


The funny thing is that if the US was modifying the atmosphere, these nice looking sunsets and circles around the sun might be expected. That is why I feel that the world governments are doing something. It could just be the contrails from the thousands of jets a day that are causing this I suppose.

I know that increased meteors disintegrating in the atmosphere can increase noculescent cloud formation. I wonder if they can increase the other solar events also.