posted on Sep, 27 2013 @ 02:11 AM
link
I don't know what to think of this one, its based on energy photography, the scientist seems to know what he is talking about. If we assume that this is factual as stated. I'm sort of thinking that the earth could be some sort of incubator for the Universe, where we as humans are formed until the physical body gets recycled, and the Astral body goes Star walking, if the karma isn't too heavy? www.adguk-blog.com...


thats cool
Have you heard the idea that the soul weighs 21 grams?

If the image used in the article is the actual image I say that is poorly done tom foolery.

The concept is intriguing, because after all we are forms of energy and when we die our energy has to go somewhere according to scientific laws.


Are you talking about the picture in the beginning of the article with the person going "towards the light", I dont think there saying that one was real haha.. just an illustration, although I haven't watched the videos yet.

I suppose it might be possible to photograph this kinda thing... Not like I know anything about it...

Looks like something from da vinci honestly... this pic is quite beautiful

In seriousness, I'm checking the videos out for a bit.

anonentity
I don't know what to think of this one...

The exact same article was posted a few days ago, but it was a different photo then.
www.abovetopsecret.com...

Edit - after a bit of research:
1. The image of the man rising from the bed, this artwork has been kicking around since at least May 2010. See this article here on NDE's partway down this blog page...
link

2. And as mentioned a few days ago, the other one in the other thread is an image stolen and cropped from a site that sells saunas.
link

You can't? Didn't think so.

I'll say this. As someone who's seen the soul leave the body I can attest it doesn't look anything like that.

If the pic it genuine were is the soul going too? and if we have a soul (Humans) does every living thing on this planet have one too.

To many assumptions and not enough scientific answers for me.

posted on Sep, 27 2013 @ 05:16 AM
link
Looks like a time lapsed photo of someone going from a seated position to lying down, not the other way round.

As others have mentioned, the lead-in image used in the article you linked to is not the image done by Korotkov. It's just a nicely-worked photoshop and having seen it a couple of years back, I recall it was originally supposed to give some idea what happens during astral travel.

The article with Korotkov's actual images (posted in one frame) is HERE, but to assist members who can't or would rather not open an external link, I've upoaded a copy to ATS: 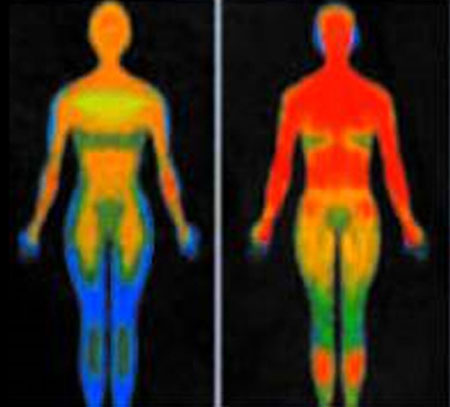 In the above images, we can clearly see the "blue" (indicating "life force") as it leaves the body.

EDIT to add: I see now that alfa1 has linked to another thread here on ATS that also has the correct image and the same link to the article that includes it. My apologies for not noticing sooner and thanks to alfa1 for finding that one. However I might as well leave the image in this post for reference.

posted on Sep, 27 2013 @ 05:49 AM
link
Ok, no joke. Anyone who believes this, please take a number and go stand in the corner, wait for us to call that number, and when you enter the red door, it will be nirvana. ONE AT A TIME PLEASE.

You'll never see each other again, but that is the price to pay for nirvana, eh? eh?

posted on Sep, 27 2013 @ 05:50 AM
link
Second paragraph people.
"The image taken using the gas discharge visualization method, an advanced technique of Kirlian photography shows in blue the life force of the person leaving the body gradually."
There is clearly no BLUE in that picture. Its not the real picture.

posted on Sep, 27 2013 @ 06:01 AM
link
I'm nearly 100% positive that the pic is just an illustration but I watched the full video of the this man talking and it was very interesting. I am very intrigued by his field of work and plan to study biology, physics, chemistry and some geology because I am very interested in unconventional yet very real science like this. The interview talks about a lot of things and actually not a whole lot about the thread topic although that is extremely interesting as well. A lot of the things he talks about are very real and pragmatic issues dealing with natural energies in food, water and environment and how it is important for us to recognize this and focus learning around the importance of energy signatures in all areas. At first it may sound very meta to some but it is actually rooted in an important field of science. I recommend taking the time to watch the video. He brings up a lot of important issues, even GMO effects and mad cow disease and how it came about.
edit on 5201330AM9AM16p02America/Chicago by NotAnAspie because: (no reason given)

Or am I the only person lucky enough to have witnessed this?

posted on Sep, 27 2013 @ 08:39 AM
link
Pure simple multiple exposure camera trickery. Asif the 'soul' would even have such a three dimensional form anyway.

EnochRoot
Does anybody remember the film "The Asphyx"?

Yes, I watched that movie about a year ago.

For those who havnt seen it, its not so much about photographing the soul, but photographing (and then trapping) a being that comes to get your soul.
The theory in the movie was that if you can trap that being (the "Asphyx"), then it cant get your soul when you die, so you cant die.

As others have mentioned, the lead-in image used in the article you linked to is not the image done by Korotkov. It's just a nicely-worked photoshop and having seen it a couple of years back, I recall it was originally supposed to give some idea what happens during astral travel.

The article with Korotkov's actual images (posted in one frame) is HERE, but to assist members who can't or would rather not open an external link, I've upoaded a copy to ATS:

In the above images, we can clearly see the "blue" (indicating "life force") as it leaves the body.

EDIT to add: I see now that alfa1 has linked to another thread here on ATS that also has the correct image and the same link to the article that includes it. My apologies for not noticing sooner and thanks to alfa1 for finding that one. However I might as well leave the image in this post for reference.

Thanks for that some very interesting stuff, I note Korotkov has some pretty impeccable credentials, which helps with this sort of thing. The type of photons which are released in ultra violet discharges, would be those supposedly from exited electrons. I thought it was only atoms that gave off photons during excitation. Like a lightening discharge, which is composed of electrons. So how does the science stand on photons coming from electrons, which they must as witnessing the blue glow of various natural distcharges seem to testify to.Ie you can see the effect..ergo it must be photons.


thats cool
Have you heard the idea that the soul weighs 21 grams?


Yes 21 grams is significant, The human body holds the definition as a machine, ie. "That which elevates effort" It elevates the Elements the body is made of to do work. The way these elements are put together to make a living organism, has to be information which I guess DNA. is. The thing that animates it which might be remote has to have an interface on the physical level, which would have to weigh something with at least its physical component.
I suppose what i'm saying is that its "thoughts" that it elevates, we can see thoughts in an image scanner looking at a brain, lighting up in certain areas as it reacts to certain pictures. But the brain is another muscle, getting its orders from somewhere else, and operating in a closed system which the body is. Which interacts with fellow humans in a constructive way. If the person doesn't interact with fellow humans constructively, they will engulf the non constructive human like white blood cells do to an invader.IE attempt to heal or failing that isolate. Which would essentially train the developing psych to act more rationaly as the lifetime progresses. All the higher/ greater mammals seem to react like this, could this be construed as the type of cooporation that is required in a world after what we call death. The more I think about it the more it seems that for life on earth to develop the way it has is twofold, 1 life can develop anywhere in the universe...2 life on earth is a construct. Operating within very fine parameters The fact that the moon exists at the size and placing its in, seems like a construct, because life on earth would not have been possible if it were not so. The fact that the distance from the sun makes water fluid, I could go on but you get the gist. premise ! that life can exist anywhere, well it obviously cannot, and we are looking very hard.
So could it be that the real world civilisation exists when we have left the corporeal body, that Aliens and flying saucers are actually from this other realm, and maintaining this construct? where what we see of them, is like a bear trying to work out what a human is, if it does us no harm, that after a while we hardly notice unless your looking for them? because their is certainly a great deal of similarity between ghost sightings and Aliens. To call the Astral body, astral seems to validate thousands of years of human effort in putting up temples to map the course of the cosmos, which might be are true home, whichever nomenclature we seem to use, in whatever religion, Heaven is always out there. Because to get around the Universe, of E=MC/2 not having a body could be a handy thing.