posted on Sep, 24 2013 @ 09:31 AM
link
It's almost October, one of my favorite times of year for sharing ghost stories. I came upon an article on the top ten haunted universities in the U.S. The article is dated from 2010 but I couldn't find a more recent list. Besides, I doubt the list would change much over the years. 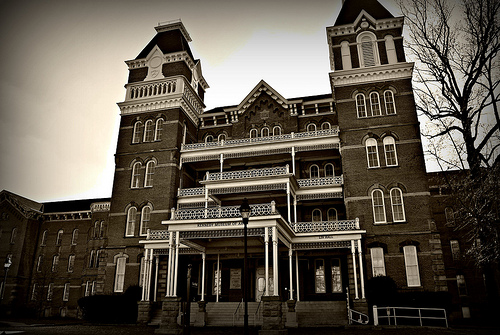 And last but not least, my alma mater

When I joined ATS last year, one of my first threads was about Ohio University and all of the stories and legends of both the university and the surrounding areas. I also mentioned some of my experiences as a student there. If you are interested, you can read about them at the following links:


I currently work at Central Michigan University and the only haunted building that people talk about is the administrator building, Warriner Hall.


Legend has it that a young woman was killed in Warriner Hall many years ago after her head was crushed by an elevator. The legends claim the girl’s ghost haunts Warriner Hall and in one of the windows, lights can be seen flickering and her silhouette can be seen. Is this just an urban legend?According to a June 2, 1937, edition of Central State Life (the predecessor of Central Michigan Life), Theresa Elizabeth Schumacher, a 19-year-old cafeteria worker from Nottawa Township, was killed May 29 after her head was trapped within a small window in a door leading to an elevator shaft. She died from strangulation. It remains unclear as to why her head was in the door. There were no witnesses to the incident.

Cindy Smith worked as a custodian in Warriner Hall throughout the ’90s and said she has encountered the ghost many times. She said the elevator would open and close by itself. “There was one time, I was in the elevator and the door flew open,” she said. “The ghost came on and went down to the basement with me.” Smith said she saw the ghost flash across the stage in Plachta Auditorium and her vacuum would occasionally turn on and off by itself. Smith eventually got used to the ghost and would even be friendly with her. “I would ask if she wanted to help me clean and would give it a rag to help,” she said. Is it real?

Keith Voeks, assistant director of University Events, had a similar experience while with director Bob Ebner. One night in 1982, they were taking down a show set on the stage of Warriner Hall’s Plachta Auditorium. It was late at night and they were by themselves. The doors had already been locked. Then, out of nowhere, a shadow-like apparition ran across the stage. “We saw a shadow move across the stage and we were out of there in no less than 30 seconds,” Voeks said. He said in the 1980s, the stage had a fire curtain, which worked as a wall that would come down over the stage and protect the audience from a fire if one broke out. Voeks said the fire curtain would malfunction by falling and crushing things. “We would constantly find broken chairs and music stands,” he said. One night, Voeks said he saw the fire curtain right on top of the piano. But the piano remained unharmed with only a layer of dust on the surface from the speed of the fire curtain. “Theresa was playing with us,” Voeks said. “At the very least the piano lid would have been broken.” Voeks said he has received many reports of seeing lights from the sixth set of windows on Warriner Hall. But that cannot be possible, he said. The sixth set of lights is an empty space of only about five feet between the fifth floor and the roof. No lights were ever installed. He said it is not beyond the realm of possibility that Theresa’s spirit could revisit the place of her death. “I do believe Theresa is a spirit that keeps an eye on Warriner,” Voeks said.

It's interesting to me how many ghost stories and legends revolve around almost every college and university. Could it be over active imaginations from students with stories that have been passed down and increasingly exaggerated? Is it because of the age and history surrounding most campuses?

My hope for this thread is a discussion of other ATS'ers experiences on college campuses. Please submit any personal stories you have. It could be something that happened to you as a student or as an employee on a college campus. I hope to read some cool spooky stories! Thanks!

posted on Sep, 24 2013 @ 11:00 AM
link
I went to Cameron in Lawton, OK. A smaller, newer college, but good enough. Not a community college or anything.
Anywho, the haunted building on campus is Nance Boyer, which is devoted to English and Languages dept. There's no legend, that I ever heard. There were just certain professors who had classes on the third floor that would talk about seeing people that weren't there, etc. Nothing too impressive.

Of note, the building was once a drive in theater, before it was converted. So, yep.


Star for being first. Thanks for the story. Kind of makes you wonder what happened on those grounds even before the drive-in was built.

posted on Sep, 24 2013 @ 12:12 PM
link
So many ghost stories on campus remind me of ghost stories at summer camps. They are mostly legend, passed from upper classmen to lower classmen every year. It's hard to know how valid they are, because, let's be honest... college kids make stuff up to get attention/get laid/get a free beer.

I did my undergrad at Northern Iowa and I remember there was a story about a ghost named "Augie" that haunted one of the the residential halls. I had a friend who claims she could "sense" him all the time.

Here is the summary of the story:
source: www.northern-iowan.org...


The other building on campus that is said to be haunted is Lawther Hall. When the building was being used as an infirmary, a soldier died. Augie, the ghost, used to reside only in the attic but has moved to the rest of the building also. Augie appeared in the Northern Iowan as early as 1977. He was reported to have changed the lettering on a bulletin board to say, "Augie will return to haunt Bordeaux House." Augie was also rumored to have removed posters from walls and turned on radios which would keep playing even after they were unplugged.


Another story concerning Augie happened one night when an unsuspecting resident was sleeping. The resident woke up to find her television screen was blue. She heard footsteps moving across her floor. She also held her sheets tightly and felt someone on the other end starting to pull them off. While this was happening, the television screen flickered and then said "Good Night."


As the story goes, Augie was once a soldier during World War II and became a patient in the infirmary that was housed on the top floor of Lawther Hall. There are variations of the story from here: either Augie died while in recovery or, the more popular version, Augie fell in love with a nurse who unfortunately died of the bacterial disease typhus. Unable to bare life without her, Augie took his own life and has haunted the building ever since.

Unfortunately, there is no record of Lawther Hall ever having been used as an infirmary during WWII in the Rod Library archives. It was instead used as a women’s dormitory for U.S. Navy WAVES (Women Accepted for Volunteer Emergency Service).

This, however, does not leave the story of Augie to be more fable than phantom. According to Paula Lindberg, a custodial staff member at Lawther Hall, the attic was in fact used as an infirmary at one point.

“The actual attic that we cannot get access to anymore actually has surgical room setups,” Lindberg said. Lindberg also reported that the setups are still there to this day.

If the legends of Augie’s origins are not enough to convince skeptics, there are still a number of eyewitness accounts that make people wonder. Janette Mactaggert, who has worked in the Lawther Hall office for 27 years, has heard numerous stories in her time at UNI.

“I have heard students say that their water turns on by itself, and I’ve also heard where (bed) covers have been taken off,” Mactaggert said.

Although Mactaggert said that even though she does not personally believe in spirits, she could not be paid enough to spend the night in the hall by herself.

One of the most famous stories about Augie told throughout the years is that when a resident assistant was doing rounds at night, she said she saw a man walking down the hall in some kind of uniform. When the figure walked into one of the women’s restrooms, he disappeared.

Freshman Kylee King, a pre-nursing major who lives in Lawther Hall, has heard about Augie’s more recent activity. King has heard stories of Augie taking an alarm clock and throwing it from a desk.

That is the only campus ghost I've ever lived with. I did have water that turned on by itself. I did hear strange noises sometimes... however, I never attributed these things to Augie. It was an old building with crappy plumbing and the wind would blow HARD on that campus, which (at the time anyway) was basically in the middle of cornfields.

There was another ghost on campus named Zelda, but I was never in the building she was supposed to be in.

Looking forward to meeting more campus ghosts! Thanks for the thread!


Thanks VegHead! Cool stories! I found this to go along with the story of the blue screen:

The resident ended up punching herself in the face when the powerful tugging on her sheets suddenly stopped and her hands flew upward.

Haha! This made me laugh for some reason.