Why does the NYPD want Apple users to upgrade to iOS7 ?

Cops in the city have been distributing fliers outside subway stations and Apple stores urging owners of the iPhone and iPad to upgrade to the recently released iOS 7 operating system, which comes with a new security feature called Activation Lock designed to make life a little more difficult for thieves. 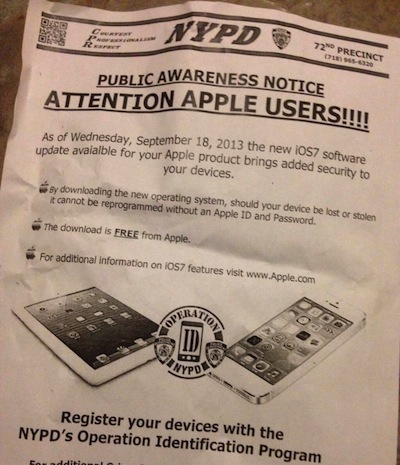 But according to this article, it may be for a different reason;

Apple has patented a piece of technology which would allow government and police to block transmission of information, including video and photographs, whenever they like.

It looks like they are trying to put the genie back in the bottle.
I think anytime a public official engages a citizen it should be documented.

Real time documenting and uploads could be a very powerful tool for the public.

I could understand deploying this tech in sensitive or private areas, but imagine if your phone stops working anytime you are near a cop.....which is what this could lead to.

I think it is safe to say, you shouldn't take software and hardware advice from the NYPD.

posted on Sep, 23 2013 @ 05:15 PM
link
Great Catch Tanda! I'm skeptical of cops at times and I'd check this out myself if I owned an Apple phone, but....I wouldn't even know to check it out if it were for the flyer to be curious. If nothing else, it accomplishes that. If the new OS is a major improvement, then I'd say they met their 'serve' part for awhile... lol


For skeptics..I'd say this is also enlightened self interest. Their fraud squad probably has cabinets full of ID theft and related issues. The Police Dept here only deals with a couple hundred thousand people and someone I know last year was told that they had no manpower or time to work an ID theft case without MAJOR loss involved. Simple threshold to a major charge isn't enough for how many they have to work.

posted on Sep, 23 2013 @ 05:36 PM
link
The flyer is intended to decrease iPhone theft and enable return of stolen items. I imagine there must be a large incident rate on those.

The patent is entirely unrelated to the flyer.

Operation Identification is offered free of charge by the New York City Police Department. The program involves engraving an identifiable serial number with the letters N.Y.C. on all portable valuables such as computers, fax machines, copiers, etc. and registering only the number and the owners name and address with the Police Department.

This program can be implemented by contacting your local Precinct’s Crime Prevention Officer. The officer will loan you an engraver, which is used to mark all equipment. Benefits from this program include:

• Special New York City Police Department decals are issued which are affixed to windows alerting people that all property contained within, has been registered in this program.
• The marked property is more difficult for a thief to sell.
• Stolen property in the possession of a thief is easily traceable to its rightful owner.
• Found property can easily be identified and returned to the rightful owner.

Oh yeah, its has the added thrill of having a swat team kick in your door rough you up and throw you in jail because its a slow day and they remember having seen your name and address on a report somewhere.

They want to be able to stop you from recording them - Period! They don't give a damn if your phone gets stolen.
Don't take the bait, they are not on our side and they haven't been since the late 1970s.
War on Drugs = War on the average taxpayer.

VforVendettea
And this is better than a find my phone program on your computer how???


Find my phone, etc. only works with a network connection. If the device isn't connected or is powered off, it doesn't do much good.

Also, without activation lock, Find my phone does nothing to prevent the device from being wiped (either through settings, or by being restored via iTunes) and being set back up for use as a new device by whoever has it, ready to use with no restrictions.

Find my phone is really only effective for if your device is just misplaced, with someone friendly, or for remotely wiping it to prevent anyone from accessing your data - activation lock, barring unexpected developments, renders the device useless to anyone who doesn't know your iCloud login.

iOS 7 has nothing to do with the anti recording technology, and despite not having much love for the NYPD, all I can see here is an attempt to stem the commonly-high numbers of Apple product theft.


You have a good point.
Apples target audience isn't exactly the working adult.

Blackberrys is and they took a hard hit because
1- They will go for years without a problem if you don't drop or drown them,
2-Adults are more interested in maintaining their house than getting the newest phone and impressing the person at the next desk.

Dell had the same problem.

posted on Sep, 23 2013 @ 09:13 PM
link
I highly doubt that there's any intention of 'shutting down' iWhatever Apple devices as there plenty of other brands just as capable of recording & distributing audio/video directly to uTube any number of other sites. Maybe they're just trying to improve their stats on recovering stolen property and returning it to the actual owner with less manpower wasted this time. Not that all their programs are that noble though.

If truly concerned then just go get a Nokia, LG, Samsung, Huawei, whatever device for peace of mind.

posted on Sep, 23 2013 @ 10:59 PM
link
More disconcerting: why would Apple want you on Ios7?
It purportedly has more bugs than Windows Vista and is yet embraced by the zombies?

Nothing Apple offers motivates me to do anything.

You'd be giving the police access to your phone when you commit a crime, or on the run, and you will, we all will.
I didnt really peruse the article proper, I imagine it's to register the serial number in case your device is stolen? Why can't you just write the serial number down yourself? That's always been how you report stolen goods, they ask if you have the serial number.
I can't read that article you linked , the text is too tiny and won't zoom .

I love their excuse about the anti theft.

It's changed now, to catch thieves who usually favor turning the phone off, so it doesn't get tracked, once they've turned it off they will need to enter the Apple ID and password to unlock it, as opposed to 10,000 possibilities of a 4 pin passcode. Supposedly they think it will deter thieves from stealing iPhones and eventually they won't steal any phones. Yes they will.


The real stupidity of this flyer is the new iOS has a serious security bug in it and no fix has been released yet. Why advertise getting it until it's fixed?

The bug is you can get into the phone with no passcode or Apple ID by sliding up the new fancy Control Center , if it's enabled to work on lock screen, which it's set to to by default. A lot of people won't know to disable it.


I wrote a long post about this on another forum when all these political and law enforcement people, from numerous states, country wide, had a huge symposium with some apple dude, about how this needs to be done, and they want to extend it to all cellphone, not just apple.

They want a blanket turn off switch for all cellphones..... Because they're stolen?
Just as many high end bicycles, same monetary amts, are stolen each year too, and no onehas ever cared.
This sudden we need you to do this so your phone is safe, was the biggest crock of propaganda poopie I had ever seen.
District attorneys from numerous states went. Since when do DAs worry about stolen phones?
Never?

Here's an article about it

posted on Sep, 24 2013 @ 03:49 AM
link
And Ummm, all you have to do is call your carrier when the phone is lost of stolen , and they can shut it off immediately. There's no reason for a kill switch. Duh


Agreed, they don't give a rats ass about stolen articles. That's the bait, you will get it back most likely, but at what cost?

Btw find my iPhone won't work if the phone is turned off and thieves turn it off, so they aren't tracked by the GPS.

They've obviously come up with this find my iPhone is not really good for theft, yes we tell them that, tell them they turn it off. It's no good, register with us, you get your property back this way. They will register, not all doing it at once mind you, they will need to hear about how it's working for others getting stuff back.

Lord only knows what else they can operate remotely, using the new iOS - institute Of Spying version 7


You hit the nail on the head in both your posts.

Police were hacking phones then, illegally/remotely, and before. Imagine what excuses they can come up with now to hijack your contacts and messages.
They want people to upgrade so they can more easily hack into your "Most Hackable Phone Yet".