"Well, yeah...but you get a chance to observe and learn things. Like, take for instance, we were undersea for a good period of time (I think he said about a week, if I remember correctly), and suddenly we got the signal that we were "docked" over the intercomm. I was desperate to see some sunshine, so I bolted to go get above deck. One of the other crew grabbed me by the arm and said "look at the depth gauge"...it showed us as being some 400ft below the surface of the ocean. I thought this was strange, but went on about my duty. The next morning, I noticed that two or three people who had been on the submarine the entire trip were not in line that morning, and I also noticed two new people onboard, who hadn't reviously been through the mess hall. I asked if anyone had seen the crew I observed to be missing, and all I got was (and I, the OP am paraphrasing here) "it's above your paygrade". I kept an eye open, and never saw those two or three folks I'd noticed missing ever come back through the food line."

I just thought this was rather interesting. I'd always heard about D.U.M.B's, but never underwater military bases.


Anyone have anything they can add to this ?

posted on Sep, 22 2013 @ 01:33 PM
link
Your story may be 'out of the blue' but easily believable... Aren't there loads of underground bases/tunnels all across America (and probably the world too), and aren't the Aliens supposed to live in bases under the sea?


could have been docked to another sub?

posted on Sep, 22 2013 @ 01:37 PM
link
Why not have underwater sub bases, they don't have to be anything great just enough to get people on/off along with supplies and it stops the enemy just using some guy looking out from a windows near a base going the sub xxxxx has docked etc.


could have been docked to another sub?

Well, he was quite specific on the idea that this signal was only (in his experience in the navy, onboard nuclear submarines) given when they had docked/moored/put on the parking breaks and went above sea level. This was why he tried to make his way uptop, to get some sunshine.

I just find this interesting, and what the heck , you know you're waiting for it, this guy is very reputable and not the type to make up BS for the sake of making up BS.

Maxatoria
Why not have underwater sub bases, they don't have to be anything great just enough to get people on/off along with supplies and it stops the enemy just using some guy looking out from a windows near a base going the sub xxxxx has docked etc.


I have no reason to doubt it at all. Hell, look at what tunneling the Gov't and military have done that is public knowledge.

I'd just never heard of Underwater Military Bases. Thought it was interesting, thought I'd share to see what others had to say on the topic...

posted on Sep, 22 2013 @ 01:45 PM
link
Many years ago the magazine Popular Science published an article on underwater hotels and retreats as a tourism spot of the future

If they can make underwater hotels and are planning to, the military can and probably has, made underwater bases. 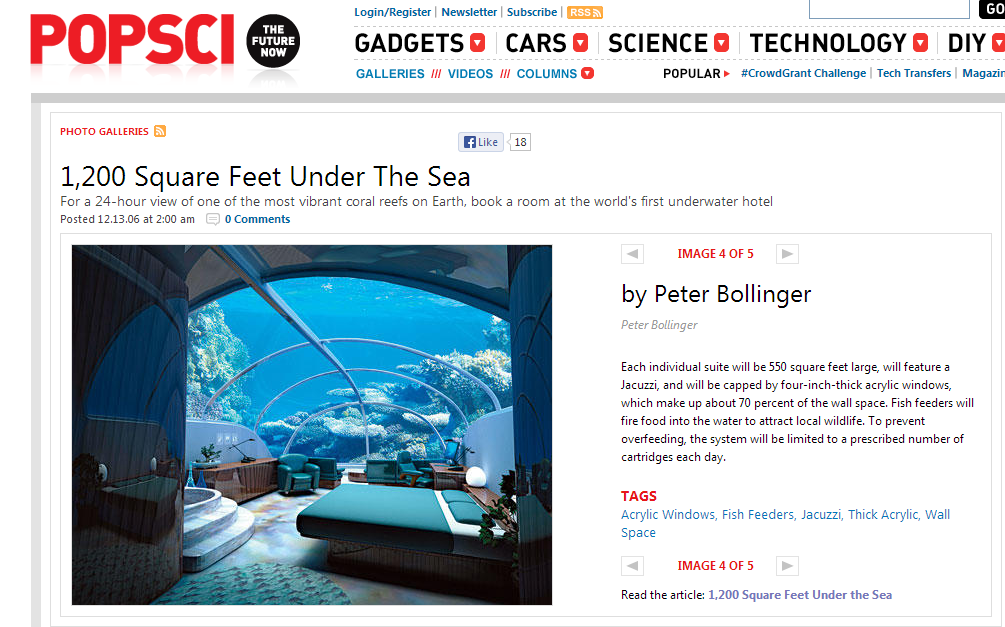 Many of the pictures,if not all, are computer-generated except some maps of island locations suitable for tourism etc.

posted on Sep, 22 2013 @ 01:53 PM
link
What better place to hide an extra launch site, or sensitve underwater long range communications site etc.....
With ICBMs being under sea launchable, it would be like an ace in the hole in case the first salvoes hadnt destroyed the world yet.
The DUMBS may be connected also ....?
Somewhere on the net theres a sworn statement by a "sub captain" that theres underwater cavens that cross California....(probably hoaxed, but interesting...)

I was desperate to see some sunshine, so I bolted to go get above deck. One of the other crew grabbed me by the arm and said "look at the depth gauge"...it showed us as being some 400ft below the surface of the ocean. I thought this was strange, but went on about my duty.


Your story has no continuity here. After bolting to get above deck, a cook would have to return to the kitchen, before getting on with their duty.

Bond super villain yard for sale: Secret Norwegian submarine base on the market for £11m

posted on Sep, 22 2013 @ 02:20 PM
link
Interesting story and it seems highly logical they would do something like this. S&F for you sir. I'll keep my eye on this here thread.


Anyone have anything they can add to this ?


There is a lot of evidence stemming from US government feasibility studies that such bases exist in underwater sea cliff walls. Richard Sauder wrote a great book on the subject which I have read:


I do believe that military underwater bases do exist...and I think they have been there for quite some time. I am thinking too...that perhaps UFO's from other planets and their inhabitants...may have underwater meeting places too.

posted on Sep, 22 2013 @ 03:29 PM
link
I thought there was one in the Bahamas? I know it got above ground facility but thought it had underwater one too?

Either way very possible. Could make a good ammo dump and storage center .


OP, I'm probably going to sound like an idiot for asking ...but given how secretive and 'silent' the "Silent Service" tends to be, I won't feel too bad. Do submariners on modern submarines not have a general awareness of their position in the world? Obviously, in decades past, such information would have been a pain in the butt just to pass along, if no other concern existed about it. These days though?

Or is that just the movie version of what life on a modern sub is like?

I'm just wondering what Ocean and area, if he knew? Even a ballpark idea? A week travel makes for a big big circle of uncertainty...but 400 foot of depth narrows it considerably.


Underwater military facility's are actually common sense and to at least some degree may have been around since the second world war, the German reich may have had some (maybe we or you are actually still using some of there facility's though I doubt they would be up to spec in today's technology rating), there is a simple reason, you can hide a submarine, you can hide a submarine base, you can hide a facility for war time or cold war time operation's and the oppositions' satellites do not know what you are doing.

Paulina Zellitsky whom discovered the possible underwater city north of cuba designed underwater bases for the soviets before the end of the cold war so they had them and why not us.
S+F


Two types, complete submerged facility's and Umbilical facility's connecet by either long tunnels and airlock's to the land or other facility's, it enables the rapid alternative resupply to a vulnerable surface supply fleet but is a bit less dynamic and flexible as once there location is known they loose there value in wartime, hence why they want them kept secret.

Another possibillity though unlikely due to the cost of implementation would be a large submersible craft big enough to dock a submarine in itself but mobile enought to allow it to be deployed to whatever theatre it was needed in.