posted on Sep, 21 2013 @ 04:29 AM
link
This is a disturbing article , which leads the reader through a journey into the hard and cold reality of the planed and complete decimation of many European countries and then moving relentlessly on to total control of the World.
For those that are not aware , it has be a long and criminally insane plan that started before even your Grandparents took their first breath.

This game of debauched greed and power lust has crushed nations , bleed its populations of their livelihoods and their lives.

It is a plan more sinister than any Adolf Hitler could have conceived.

Why did this generational group commit these crimes against humanity?

They are indeed insane by any human standard , total psychopaths to be exact and they, in their warped delusions believe themselves to be superior , a more advanced breed of human.

Totally without a conscience and an example of the most depraved aspects of humanity.

They are the "Controller's" , TPTB and their minions.

What you would say could be worse than a World War?, well this is worse much , much worse , it is a cancer and its going to devour humanity.

The article below speaks of the most recent aspects of their journey for Control of this planet , the financial part.

This is happening right now and every second that ticks by more of the tentacles of this beast move into countries to ensnare and subdue , for only total submission and Depopulation of the planet , will feed this evil and depraved greed.

This section is a little into the story , but it speaks of the effects upon the American people:

This swath of international destruction being promulgated by Goldman Sachs is also being visited upon the daily lives of the American public here at home. Courtesy of the Goldman Sachs gangsters, there are no more safe financial havens for American citizens. Your bank account, your pension fund, your investment accounts and your home mortgages are no longer safe. These collective funds are not in jeopardy because of the risk of falling victim to the failing economy as much as these funds are subject to confiscation by Goldman Sachs and its shell corporations along with the complicit support of the federal government. Most of these public officials are former Goldman Sachs employees. A clear case in point lies in what happened with MF Global.

posted on Sep, 21 2013 @ 05:51 AM
link
I totaly agree! Its time to make a rebelion against such mad people that want to control the world! We are the majority,soo what are we waiting for?Do not be afraid!-(mentoning for all people)


This is an ugly can of worms.

If there were to be a single family-come-organization that the finger could be pointed towards for the global financial/geo-political ills for over the past century... it would be The Goldman Sachs Group, Inc.

The Federal Reserve is destroying the middle class. Though some might argue that as a member bank, Goldman Sachs is indirectly responsible.

Then again, theres no way to confirm who owns the Federal Reserve though many people suspect that its owned by the Rothschilds.

And how do they destroy the middle class? Through debt, money printing, inflation (devaluation of the currency) and the boom and bust cycles, which they cause.

Ron Paul has been sounding the alarm on this issue for decades. 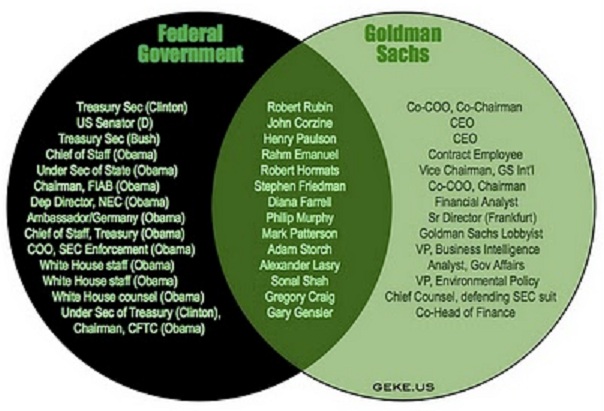 Saturday May 8, 2010 9:13 pm
I. Introduction.
This essay shows the pervasive influence of Goldman Sachs and its units (like the Goldman-Robert Rubin-funded Hamilton Project embedded in the Brookings Institution) in the Obama government. These names are in addition to those compiled on an older such list and published here at FDL. In the future, I will combine the names here and those on the earlier article but I urge readers to look at the earlier list too (links below). Combined, this is the largest and most comprehensive list of such ties yet published.

All part of the ultra Left Wing / Corporatist agenda.