Lol I'm sorry but that comment is hilarious! This is the real deal man, whether you like it or not. This photo has not been edited in any way. And if I ever was going to "edit" a ghost into a picture for some reason, I'm pretty sure I wouldn't have put it upside down in a bottom corner.


I would love to see the real deal, unfortunately this is not.

As ArcAngel pointed out the projector is clearly visible underneath the camera if you brighten the picture a bit and is being held at the same angle as the image of your 'ghost'.


That's not a projector, it's a clearly a digital camera.
It doesn't make sense. Why would the image be upside down if it was projected? And if this is a reflection on the water of said "projection" on the wall...then why isn't the image on the wall!?

Also, I think we would have kept the "prejector" out of view if we were planning on making a fake.
edit on 21-9-2013 by ArchaicDesigns because: (no reason given)


The idea that this was projected had crossed my mind also , so i'm glad that this was mentioned , however no projectors that i can find have a digital screen on them.
This is a camera , as the OP says.


The idea that this was projected had crossed my mind also , so i'm glad that this was mentioned , however no projectors that i can find have a digital screen on them.
This is a camera , as the OP says.

you are looking at the wrong thing.

And this device by coincidence points at the "ghost", who, by coincidence looks like The Joker or that dude from Ghostbusters? Not very credible to me.

Unless otherwise proven, for me this is nothing but a hoax by two bored teenagers on a boring Saturday afternoon Sorry..the "ghost" just looks too good to be true.
edit on 62013RuSaturdayAmerica/Chicago47PMSaturdaySaturday by NoRulesAllowed because: (no reason given)


It's been a while, so I could be mistaken, but I think that's a MAG flashlight.
It is definately not a projector lol who in their right mind would post a ghost picture with a "projector" clearly in view? I find this amusing.


I have to disagree. It's funny how people try to tell me how my own experiences went. There was no projector of any kind with us on that day. So when you're telling me that my friends and I did something that we totally did not do, I tend to find it amusing. Why don't you guys share some photos of these portable "projectors" and compare?
edit on 21-9-2013 by ArchaicDesigns because: (no reason given)


Just to be clear, you stated earlier that this was a demon, right? No offense, but I believe that you are experiencing pareidolia (see below).

Pareidolia (/pærɨˈdoʊliə/ parr-i-doh-lee-ə) is a psychological phenomenon involving a vague and random stimulus (often an image or sound) being perceived as significant, a form of apophenia. Common examples include seeing images of animals or faces in clouds, the man in the moon or the Moon rabbit, and hearing hidden messages on records when played in reverse. - Wikepedia

Until other data is presented, I stand by what I wrote. Occam's razor is at play here.

Don't feel bad though, this happens a lot on this board.


Sorry, but hardly teenagers in that photo, I was 25 at the time lol and we have better things to do than fake an upside down ghost. You are just blindly leading people to this projector idea when you guys have not even come up with a photo of said projector. Like I said, if anything, it looks like a MAG flashlight to me.
If we were using a projector, I'm sure we could have "projected" a much better ghost than in the photo.


I don't feel bad because that is what i see. The crouched figure seems to lack hair, ears and clothing. This doesn't fall in line with a ghost in my mind but instead is more akin to a demon. Pareidolia might be one answer, but it isn't always THE answer. The religious history and folklore surrounding demons is simply too wide spread across to many cultures for everything to be chalked up to imagination. If you can agree that the theory of multiple dimensions/realities is a possibility then it falls within the realm of possibility that ones of the dimensions would be what we call, for lack of a better term, hell.

To paraphrase Freud, sometimes a demon is just a demon.

LOL Occam's razor is all well and good but you have to include the vast majority of people all over the world who actually believe in these things as well. In the end which is the simplest explanation?

That billions of people believe in demons because they are real and have been referenced throughout history by every major culture, or everyone is just playing "make believe" with their faith?

It's cool, i stand by what i said too. I think the figure is too straight when compared to the angle of the camera the other person is holding for the image to be faked. The head should be cocked further to the side and it's not, if you flipped the image 180 degrees it would appear straight and in line with the wall, crouching as any "humanoid" being would.
edit on 21-9-2013 by Thorneblood because: (no reason given)
edit on 21-9-2013 by Thorneblood because: (no reason given)


If this was a projection on to the water, then why is the reflection of hole in the wall overlapping the image? 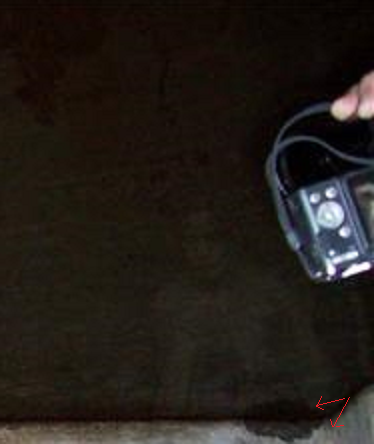 
that is very creepy..was there any temperature change noticed?
i dont know much about this but it seems to happen..


Thank you! I don't expect everyone to agree, but I assure you, there was no projector of any kind used in this photo. I appreciate your comment, it takes a man (or woman) to own up to his mistakes.

I cropped, resized, and tried to line the faces up in a gif. The face characteristics match even through the tweaking, although the body, no. Odds are, a 'shop head-swapping job, and he damn near fooled us with it presented as a real ghost image.


doesnt look like the Joker to me at all..sorry

posted on Sep, 21 2013 @ 05:43 PM
link
i don't see any projector and it doesn't look like the joker either. if anything it's just an odd reflection in the water that SEEMS exactly like a human form. it can happen.

doesn't seem fake to me. not sure i believe it's really a ghost but it's a cool story! thanks for sharing it


That would make a lot more sense if the picture had not been taken in 2007 where as the Dark Knight was released in the summer of 2008.


Haha! Sorry, but that was the funniest one yet!
Firstly, the photo is from 2007, The Dark Knight didn't come out till about 2008.

I don't even see this "joker" face in the ghost photo. I don't know what some people's obsession with this Ledger Joker is? And why do people insist on trying to tie him into everything.

Why are you so certain that this is photoshopped, Nyiah?
You even said so yourself, you're not an expert.

Funny, I usually get along with red heads.
edit on 21-9-2013 by ArchaicDesigns because: (no reason given)