Senario that can result in World War III

Today 6.5 billion people are afforded with enough nutrition based upon the idea that, either they shop or they hunt. But what happens in 100 years and considering the conclusion we can feed 7 billion people, with a total population of about 10 billion.

So what happens when the population of the Western Hemisphere can only feed itself???

The earth can sustain more people than you think.. consider food production in America, its not like every square inch is farmland. There will be new tech, and so forth, and I believe population growth with level off in other countriesbasbit has more modern ones when they can't feed those people.

Also, mayne civil unrest, but world war? Nah.
edit on 21-9-2013 by GogoVicMorrow because: (no reason given)


160 billion pounds of food is wasted in the United States alone; you think we are efficiently utilizing resources that the studies you point to in regards to societies ability to feed so many people?

Estimates for the United States is that we have a 60% efficiency rating; meaning 40% of all the food we have deemed "uneatable", we discard; regardless it is or isn't.

Other interesting notes: Approximately 28% of the farmed land in the world is producing food that will just be thrown away. Nearly 30% waste is inefficient.

This planet can support vast numbers in terms of population. Question is, when people begin to muddle in the process, we get waste and inefficiency. Government mandates, labeling requirements, etc, etc.

posted on Sep, 21 2013 @ 12:50 AM
link
Could you please go over your math? If a 1/2 billion people strafe to death every day according to your math in about 14 days we will all be dead. You may have meant 1/2 million. I'm not sure but it's hard to follow where you are going with math like that and I'm not a mathematician.


Lot's of thoughts dispersed...including chemical or natural fall out,


We all hate math anyway. So we got a week or two left eh?


ETA - If you meant half a million a day and assuming you are correct on western hemisphere population growth then yes we could be in a WW3 scenario in the future.

However seeing how we are/were in a WW3 scenario with SyriaRussiaIran in the last week or so I doubt too many average folks are going to be worrying about it. Basically we have too many high tension situation right now to be looking decades in the future. (Unless that's their job.)

So what happens when the population of the Western Hemisphere can only feed itself???


Death would not skyrocket. People would eat each other ... I'm serious. When SHTF aim for the legs.

OBTW starving people make poor soldiers. Starving soldiers aren't great warriors. The likelihood of starvation bringing on WWIII is one of the most remote reasons of all.


For the record if a person reaches the ripe old age of 50 and dies, having spent his or her life malnourished, that relates to cause of death.

Life expectancy for a male in India is on average is 63.8 years while in Sweden it is 79.8 as an
example.

I really enjoyed this statistic...


To satisfy the world's sanitation and food requirements would cost only US$13 billion- what the people of the United States and the European Union spend on perfume each year.

...because it's time to realize that it is the truth that stinks. Everybody can stop trying to cover it up now.

Food fears are sometimes used as propaganda, but with good management, those things can be ironed out.
No one is giving us permission to iron it out though...and we all live under the assumption that we must wait for permission for these types of things. It's just how society is constructed. I think food should be a right of every person regardless of income or job status and should not be part of the profit based system. I think we should have... maybe prisoners growing food, that's just one idea... but there are many approaches to management of keeping food on shelves and each and every person having the ability to just into a store and get what they are allowed regularly...and somehow factor this into to a government system. No one should go hungry regardless of money or job status. If simple things were taken care of in this world ALL ACROSS the world instead of watching the gross manipulation of wealth and waste, then it would legitimize paying taxes and you wouldn't have as many people like me trying to figure out how to legally avoid them and collapse the system. The system is supposed to work for the people. The taxes are supposed to take care of the people... not send some of them weapons to kill other people... not on black ops that run drugs across the world... not on programs that whisper mass shooting plots into our heads.

people who campaign against benefits have got to be shills... especially feeding the elderly and poor.
It is one of the few legitimate government programs. I mean, you'd think that would be obvious... but like i was mentioning in another thread...i actually got trolled by a anti-foodstamp campaigner trying to pose as a southern biker with a northern accent in a grocery store. very strange stuff.

posted on Sep, 21 2013 @ 02:51 AM
link
A food crisis can be solved with Soylent Green, seriously. People eat beef, but they usually don't think how that beef came to their plate. It doesn't matter where the food came from as long as it is food. People can be conditioned to support anything. That is what the media is for. So when the food crisis comes everyone will be eating Soylent Green and asking for seconds.

The thread to me does not make sense. There is no population limit, and no food limit. As someone else mentioned, so much food is wasted each day. And if we didn't have Monsanto controlling the food supply, each family could grow their own garden free of poisons and live much healthier lives. Furthermore, instead of spraying Roundup, farmers could employ people weeding their fields by hand and solve all unemployment problems. In many ways, we need to go back to being an agrarian economy and live simpler lives closer to nature.

Dont sweat Pop Levels 50 years from now.
We will have gone through "the fresh water" war long before that. Pop Levels after that war were at a very greatly reduced number.


When it starts getting desperate meat will be one of the first things to go, along with the animals raised for eating.

Raising an animal to eat it is extremely inefficient. Its a luxury future generations except the very wealthy will not know.

While humanity is unlikely to resort to eating the dead on an industrial scale anytime soon we will be eating more grains, vegetables and protein from insects. Cows will be seen only in zoos and on the discovery channel.

My answer is to set up a biotech company where we grow our food in a petri dish.
In fact I am close to starting the trials of petri-burgers in the lab .

Essentially, once the Western Hemisphere (and yes there is one ) is unable to provide food to the Eastern Hemisphere ? There will be a war declared by the East against the West for those resources.

When you look at Mexico City or Tokyo of course it seems overcrowded but look at Siberia or Wyoming and there's hardly anyone there. We also have the ability to build on the ocean, under it, or underground if the need was there.

Point is that if humans all worked together there really is no limit to how many people the earth could hold or how much food we can produce to feed them. The fact that we do not do this is not indicative of the fact that it is not possible.

Its more than possible and when humanity gets to that breaking point I'm sure we will find a way to make it work.

Tinkerpeach
The earth can handle far more people than we have right now, probably 10 times as many if we were smart about it.

When you look at Mexico City or Tokyo of course it seems overcrowded but look at Siberia or Wyoming and there's hardly anyone there. We also have the ability to build on the ocean, under it, or underground if the need was there.

Point is that if humans all worked together there really is no limit to how many people the earth could hold or how much food we can produce to feed them. The fact that we do not do this is not indicative of the fact that it is not possible.

Its more than possible and when humanity gets to that breaking point I'm sure we will find a way to make it work.


Territory on Earth relates to nations ,so while there is land available for habitation in many parts of the world.

That land is only available to those who are legally able to reside their.

Furthermore, this is issue is about food not domiciles and of course it is possible that someone will come up with a way to address the issue.

As it stands today though nothing is apparent.

My answer is to set up a biotech company where we grow our food in a petri dish.
In fact I am close to starting the trials of petri-burgers in the lab . 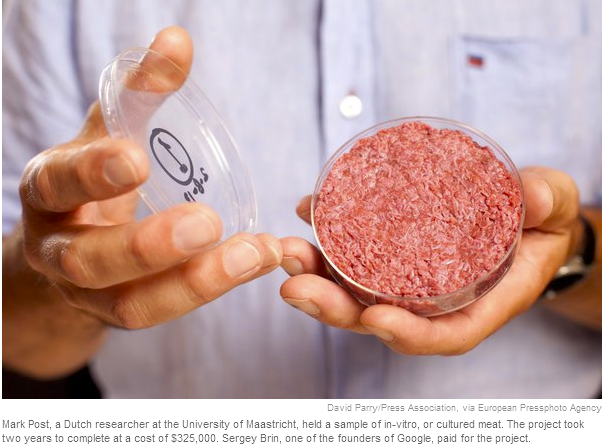 A Lab-Grown Burger Gets a Taste Test

lets hope you can make it cheaper than they did. i know that as people get use to technology, the cost for the products go down. but at $325,000 a burger it will take for ever to reach the dollar menu.

but i guess that's better than the alternative.

could you imagine how many restaurants would have to change their names.
OUTBACK S____ HOUSE, RUTH CHRIS S___ HOUSE, LONGHORN S_____HOUSE