Accessing any PC anywhere, no matter what operating system is installed, even if it is physically disconnected from the internet. You see, Core vPro processors work in conjunction with Intel’s new Anti Theft 3.0, which put 3g connectivity into every Intel CPU after the Sandy Bridge version of the I3/5/7 processors.

The bottom line? The Core vPro processor is the end of any pretend privacy. If you think encryption, Norton, or anything else is going to ensure your privacy, including never hooking up to the web at all, think again. There is now more than just a ghost in the machine.

By design or simply a side-effect of some useful updates? I guess it doesnt really matter since whatever the intent the tools and capabilities are there.


3g connectivity into every cpu?
Sounds like alarmist bs.


i am typing on a HP 6910p that has a sim card slot in the battery compartment...and is driven by a separate intel chip that corporate owner of the laptop can turn on. the 6910p is several years old..it is 3G.


ahh but hold on. That's not what the article describes.
The article says that 3G connectivity is built into every chip. And certain 3 letter agencies will be able to get in.

This is not true. If we look at this article here.

From a security standpoint, the biggest addition Sandy Bridge will deliver will be the ability to remotely kill and restore a lost or stolen PC via 3G, Marek said. Previously, that capability, which delivers a "poison pill" that can remotely wipe the PC's hard drive, was only available via Ethernet or Wi-Fi. Now, if that laptop has a 3G connection, the PC can be protected, Marek said.

As you can see it's "if" the laptop has a 3G connection.

And btw I also have a laptop with a 3G sim card in it. And of course you need an account with a provider to have that work. Otherwise it's just sitting there doing nothing. An astute user can just remove the sim card and render that useless.
edit on 20-9-2013 by grey580 because: (no reason given)


The 3g module inside the laptop, is 3g.


3g on cpu chips? Not even close to being true. Plus even if it had a 3g module on it (which it absolutly does not) it would need an aerial and reception which it wont get surrounded in a metal case. Thast why 3g dongles have ariels and are outside.

And before you say your laptop has no aerial antenna, it does, its two wires that go round the inside of the screen.

posted on Sep, 20 2013 @ 09:23 AM
link
Well, I can suggest you either stick with older Intel cpu's OR you can use AMD cpu's like I have been doing since the first Athlon slot A processors hit the scene back in the late 90's.

I try to avoid Intel whenever & wherever I can. Unless your doing some serious video encoding or massive number crunching AMD cpu's can't be beat in the price to performance ratio.

Sort of like fearing every car on the road can be remotely controlled or stopped when there are several "ifs" that have to hold true before that becomes a possibility.

Like I have a 2012 vehicle everyone told me was loaded with all sorts of Big Brother gadgets but despite being a 2012 it's still bare bones doesnt contain any of that stuff.

It isnt until those gadgets trickle down into everything so much so that you cant avoid it even if you tried that it really becomes a concern.

I don't know what it is with Intel, always trying to find new features that obliterate any concept of privacy or the PERSONAL in PERSONAL Computer ...but I've pretty much sworn them off for good. They've always charged more, for more headaches IMO, and nothing to really stand back and say 'Well, THAT was worth it!'.

And btw I also have a laptop with a 3G sim card in it. And of course you need an account with a provider to have that work. Otherwise it's just sitting there doing nothing. An astute user can just remove the sim card and render that useless.

Yeah, but that simcard and setup is activated and controlled by a GUI that you open, click around with and execute.

What I read this article as, is that there will be a simless, 3g chip built into the processor and BIOS that requires no software/sim. that can be used to send and transmit data when requests are sent or requested.
without the users knowledge and without their control.

Now that would be an out of the box idea if someone at the copyright/record industry came up with it. A means to control your digital content.

If not, bad idea Intel, because the bad guys will reverse it and hack PC's.. scary..

posted on Sep, 20 2013 @ 10:56 AM
link
im pretty sure this crap article is confusing the new ON (mother)BOARD BIOS remote control with CPUs.

The CPU CANNOT have a g3 module in it, the technology wont allow it to fit phsicly let alone the problems with getting the signal in and out AND the additional heat.

Now for the "dont you know who i am" bit - im a IT engineer and have been for over ten years, my father is an ex RAF comms specialist and current 3g/4g RF planner for a large mobile company and we share what we know regularly - this cpu+3g on chip is impossible using current 'standards' of mobile comms, 3g in this case.

posted on Sep, 20 2013 @ 12:14 PM
link
What its saying is that IF the computer has g3 and IF the anti-thief is regged AND the pc is on you may be able to track it like any normal lost apple phone.

so stay calm, its not on every chip at all, simply a capability to use means of communication which, by the way, is already possible through the internet connection you have all the time.

Its nothing more than an option to be able to track your PC like you can a lost or stolen iphone right now.

Biigs
im pretty sure this crap article is confusing the new ON (mother)BOARD BIOS remote control with CPUs.

The CPU CANNOT have a g3 module in it, the technology wont allow it to fit phsicly let alone the problems with getting the signal in and out AND the additional heat.

Now for the "dont you know who i am" bit - im a IT engineer and have been for over ten years, my father is an ex RAF comms specialist and current 3g/4g RF planner for a large mobile company and we share what we know regularly - this cpu+3g on chip is impossible using current 'standards' of mobile comms, 3g in this case.

I bet all my stars on it

I admit the article is misleading. It's like reading an article on quantum mechanics writtne by some guy who has never studied quantum mechanics...there's no way the guy can write an accurate article because he doesn't know what the heck he's talking about.

But since you and I know more than the author, I uploaded this screencap from an Intel video to put it in more accurate perspective: 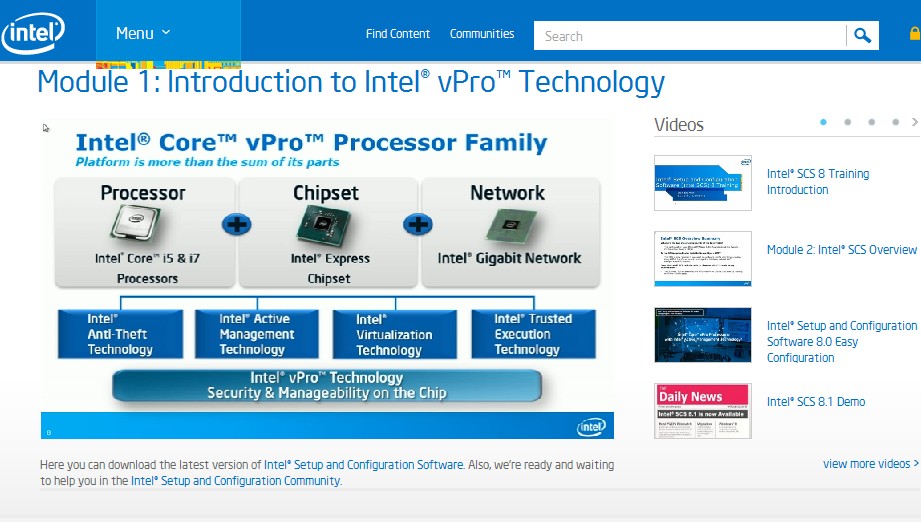 It's really the vPro technology which has some interesting capabilities, which is not just the CPU. The capabilities require the CPU, the CPU chipset, and the network.

So I think this is sort of what you're trying to say...it's not all on the CPU, so you're right and you get to keep the stars you bet.

But on the other hand, it is this combination of hardware components which does provide some capabilities which do somewhat resemble what the article says, but again it has some facts in error, like they are spying when the machine is turned off. Like any battery powered device, if you remove the battery, this usually isn't possible.

So let's say you build a PC with this CPU and chipset. Can you buy a motherboard lacking the network component? I don't know, I haven't looked. You could disable it if it was there and you knew how, so yeah technically the CPU by itself doesn't have this capability. But the Intel vPro technology, as pictured, can do some amazing stuff remotely, like completely bypass the operating system, which is kind of a new thing to me.

For more information, here's a case study on how the technology is used:

“For us, the combination of these technologies offers a completely new approach to client system management.”

I guess these capabilities are new to IT professionals also.

I see the CPU/chipset does some kind of AES hardware-assisted encryption. Given the NSA's proclivity to put backdoors in everything, I wouldn't be surprised if they had Intel put a backdoor in this technology. Something that can bypass the operating system which gives them access to the encryption would be pretty nice for NSA. Is it in there? I don't know, but it would apparently be out of character for the NSA to not try.
edit on 20-9-2013 by Arbitrageur because: clarification

I think that the person writing the article doesn't understand the technology involved.