posted on Sep, 21 2013 @ 04:21 PM
link
If this super storm is coming off the Pacific Ocean; wouldn't it be gathering a lot of radiation from the contaminated water? If the ocean is contaminated from the non stop spill... and waves, rain and wind that intense are building up, will China be hit with the radiation?!

posted on Sep, 21 2013 @ 05:04 PM
link
here is a slideshow of pics from the philippines and taiwan. it's not a direct hit there so people are still out and about. there's an awesome satellite shot of the storm too.


wow..what a monster that is!
isnt it due to hit land soon?

Good luck to the Chinese who are in the way of this Typhoon... they are going to need it.


Man the kids swimming in that last picture freak me out! With that wave crashing like that they could eb easily swept out to sea.


Thanks for the pictures! Why on earth people would stay out near the water is beyond me! A bit foolish!


do you mean from Japan? Its well below Japan, but really, who knows how much its all been spread about - I think china has its own worries with contaminated rivers and things that could cause them enough problems though!


i know! personally, i'd be as far from the coast as i could get.

posted on Sep, 21 2013 @ 10:37 PM
link
Hope it doesn't change course for Fukushima. That would definitely be game over for that place.


Yes but of course it has spreaded in radius? If its been pouring out tons of gallons evryday for a couple years, anywhere in that vacinity of the ocean will be threatened with radiation by a topical storm no?


it depends on the ocean currents. i think most of the drift is not down the coast HOWEVER we just have no clue really. any storm... including the typhoon that just directly hit japan a week ago... could spread the radiation to affect more people. typhoons hit there pretty frequently. this one just happens to be the worst one of the year.


Thanks for the web cam link. I couldn't find Hong Kong in my earth cam app

posted on Sep, 22 2013 @ 03:57 PM
link
it missed hong kong and it doesn't seem like it did too much damage. a few deaths but it could have been much worse. they are much more storm prepared there than we are here. a storm like that hitting our coast would have done a LOT more damage. the US isn't really on the ball with that sort of thing.


it depends on the ocean currents. i think most of the drift is not down the coast HOWEVER we just have no clue really. any storm... including the typhoon that just directly hit japan a week ago... could spread the radiation to affect more people. typhoons hit there pretty frequently. this one just happens to be the worst one of the year.


Agree with this pasiphae, Pretty sure the fuku spread works it way towards Hawaii/US & Canadian West coast, but yeah, by now a lot would be dispersed all over, but I'm not sure if it would be enough to cause damage..

It does seem they got lucky with this storm, seems like it's not the worst in recent years, just started off as the biggest - from News.com.au


The region is regularly pummelled by tropical storms. Typhoon Bopha left a trail of destruction in the southern Philippines last year, triggering floods and landslides that left more than 1800 dead and missing and displaced nearly one million people.

In August 2009, Typhoon Morakot killed about 600 people in Taiwan, most of them buried in huge landslides in the south, in one of the worst natural disasters to hit the island in recent years.

I haven't seen any articles mentioning fatalities just yet, so looks like they got lucky with this one!

posted on Sep, 22 2013 @ 10:10 PM
link
There is a second one developing, apparently, and it seems to be just a few days behind the Super Typhoon that has hit China....some say it will be stronger then the last. 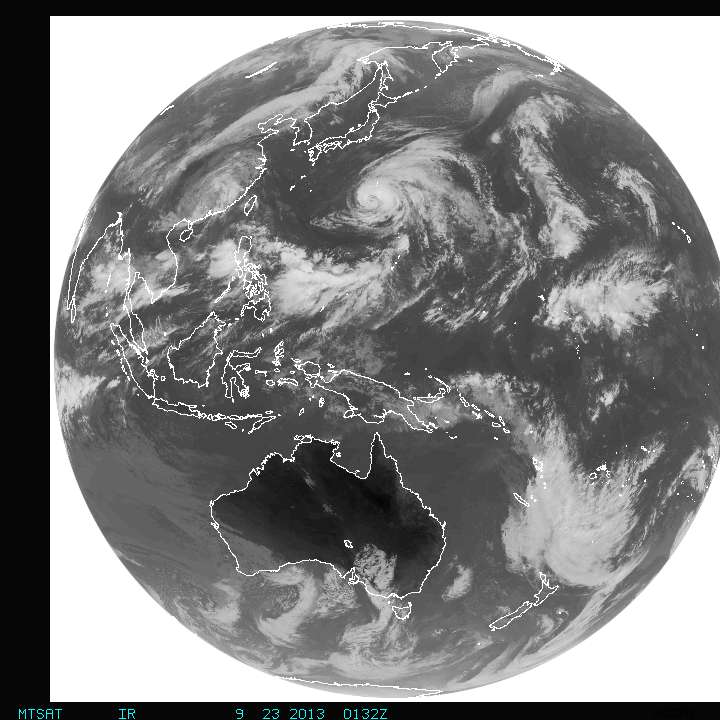 
no problem, I hope your friend remains safe!

Hi from Cebu. I hope we hang tuff too, another one on they way right through the middle.
Feel free to make a thread...I don't see one and am battle weary...earthquakes and storms oh my...
www.wunderground.com...