The biggest out of place artifacts ever?!?

Who'd have thunk it, eh?


Isn't that the mountain from close encounter of the 3rd kind?

And isn't there a place in BC that have a road going through a tree?

Those guys can get pretty big over there.


more likely fell, covered up by sediments, fossilized, softer sediment eroded away, shatters. This type of shattered 'tootie roll' formation is not unusual


wood is fiberous and will not break in clean lines like that but having nothing in the picture to judge the size if the blocks it does look like a woodsman cut them a tree that is out in the open will decay . that is where we get peat from but i have pulled small trees out of peat before that have not decayed strange tale never the less

We are talking fossilized wood which is rock, not wood

and will not break in clean lines like that but having nothing in the picture to judge the size if the blocks it does look like a woodsman cut them a tree that is out in the open will decay . that is where we get peat from but i have pulled small trees out of peat before that have not decayed strange tale never the less

Note how the centre is a different colour? That is from the fossilized tree breaking apart after the fossilization is complete....


i have cut down hundreds of trees in my life and most look different in the centre the photo you put up looks like someone cut it down . without being able to inspect the tree i cannot give a educated guess on the size of blocks but they do look like they were cut i have never seen nature do that to a tree that has fallen over .

I have read ancient writings referring to a world tree, I wonder if there was a big tree growing two thousand years ago.
edit on 20-9-2013 by rickymouse because: (no reason given)

posted on Sep, 20 2013 @ 01:43 PM
link
i thought this was all really interesting till i got to the part where he thinks the craggy hills in the background are gigantic petrified tree stumps...
sounds like Peyote playing with his head..

No evidence at all.

Everyone else think the rocks are granite (a volcanic rock formed deep underground) .....


i have cut down hundreds of trees in my life and most look different in the centre the photo you put up looks like someone cut it down . without being able to inspect the tree i cannot give a educated guess on the size of blocks but they do look like they were cut i have never seen nature do that to a tree that has fallen over .

I've cut down trees too, but never one made of rock! That photo comes from the petrified forest national park in Arizona

The Petrified Forest is known for its fossils, especially fallen trees that lived in the Late Triassic, about 225 million years ago. The sediments containing the fossil logs are part of the widespread and colorful Chinle Formation, from which the Painted Desert gets its name

See above you're only off by 224 million years and change


Yes, you are correct. It happens to be on a real island too. lol There is also one in california called the chandilier tree.

posted on Sep, 20 2013 @ 10:25 PM
link
Although I would love to believe that at one point there were behemoth like trees covering the Black Hills region, this is certainly not the case. However I don't discredit those of you who believe for thinking outside the box, sometimes its good to look at things from different angles!

Now, as a former Geology major (later turned History major, who still harbors a love for rocks and geological processes) I feel like I have a unique insight into the matter (although in reality I'm just supporting those who have debunked this theory in previous reply's).

Lets start from the top.

Here is an easy to read and convenient map produced by our friendly neighborhood US Geological Survey!

Now that we can see what kind of rock formations exist in the area, we can examine the crux's of the giant tree argument.

Those who back the theory that these giant trees (or rather, trunks/branches) have been petrified over time don't seem to have the slightest idea of how Petrification works. In order for Petrification to even begin, a very specific set of environmental variables needs to happen.

Firstly the tree/branches/twigs needs to be buried in an environment free of oxygen(this is important) as oxygen is the free radical that promotes decay in living organisms. The only strata that would create this oxygen free environment would be Volcanic Ash. Buried underneath, our little tree/stick friend is safe and sound from decay. The second specific environmental variable is that a rich mineral water needs to flow through the volcanic sediment, dissolving the silica within the sediment which then slowly enters and replaces the trees organic cellular structure (Quartz Chalcedony Mineralization).

Now that we know how the process works, I know some of you may still be thinking "Yeah that could totally happen to these massive trees, I mean, what about the Petrified Forest?" and that actually brings up a valid point. However, that point will help prove why the petrification of these "giant trees" is otherwise impossible.

If we are to operate under the maxim that these tree stumps/trunks/twigs are of/from a tree that is a 1/4 mile in diameter, to promote petrification, we would need a volcanic eruption that can produce at least 15ft of ash (to cover some of the smaller outcroppings shown in the OP's links) or enough ash to to pile up several stories to cover what some claim to be "tree trunks or stumps". Moreover you would also need a mineral rich constant flow of water on top of that.

So those on the other side of this argument are assuming that at one point, the remains of these massive trees were covered in at least 1 story of volcanic ash, mineral rich streams flowed over that volcanic ash and then years and years of erosion were able to uncover these giant plant monoliths. This would be a highly unlikely event, considering that the only volcano able to produce even a fraction of the required volume of Ash would be the Yellowstone Caldera, who only clears his throat about once ever 100,000 years, and can only produce anywhere between a 1 to 5 foot thick covering of about 2/3rds of the continental U.S (which, although impressive is not adequate). This would not even begin to completely cover the outcroppings in question. As far as I know, there is no geological record to support an anomalous ash-fall resulting in ash high enough to bury an 2 story (30 foot) office building.

Since this has already been addressed, I'm not even going to cover it.

So with those two arguments out of the way, that leaves us with the nagging question as to "What exactly are we looking at?"

To me, a student of Geology, the formations shown in the pictures were clearly of sedimentary rock. However to others who have not studied this subject, it would obviously be a source for questioning. I can't deny that some of these formations bare resemblance to a giant tree(s). With ridges and layers very synonymous with that of tree bark (i.e. the Phellem, Phellogen and Phelloderm layers) . However, what we are truly looking at, and the Map I shared earlier in my post supports this, is outcroppings of Sedimentary rock.

The ridges that look to be bark, are actually condensed layers of sediments that, under pressure create a molecular solid, chemically bonded rock. In fact, if we go back many many years in Geological Deep Time (around the Devonin period), we know that much of Northern America was located very close to the Equator, in what is now the Caribbean/Pacific-ish Ocean region. In fact, there were many regions that were actually submerged underwater! So, as many aquatic crustations die and leave their calcified shells on the seafloor, we begin to get our first layers of sediment; as continental drift and other geological processes happen, we end up with many many layers of sedimentary rock...who then get eroded by rains and continue the process. So based on an approximation of the locations given, its likely we are looking at Sedimentary rock, or we could also be looking at volcanic Shale or metamorphic Slate as there is indded a ring of crystalline igneous and metamorphic layers around Mount Rushmore.

Well anyway, there is my 2 cents I hope that helped you get an idea as to what is really going on in the region!
edit on 20-9-2013 by GreenCross because: (no reason given)


Fossil trees tend to break along straight lines....because when they break they are...rocks 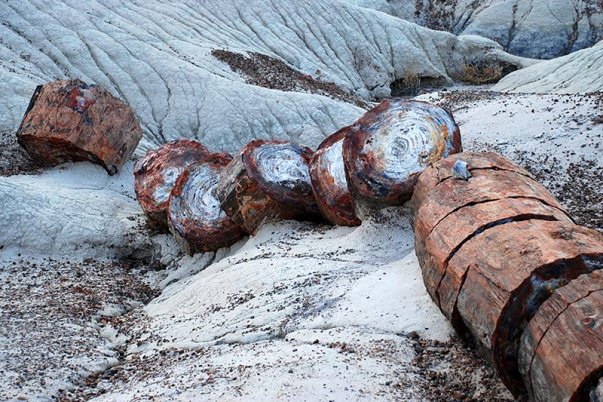 Yes and the tree rings are clearly visible. The rocks he claims are giant branches have no tree rings, and he provides no scientific analysis proving his claim when it's easy to do so.

Imagine for a second. A giant smurf Tree. It dies, falls in dry climate, and instead of rots, it petrifies.

Then as this monster tree breaks down. Giant pieces of it roll around the landscape from soil loosening and erosion.

If this guy can show that these sections rolled from a central location. Or show the angle of the roll can match to the angle of another roll, He might be on to something. I see it like that in some pics

in Video he has a lot of material. A lot of hiking!

the one at 6:07 is epic, and looks identical to petrified forest examples!

Don't the Native Indians believe their spirits live in these hills?

What I don't get is how these "finds" would support a biblical world view... supposing for just a moment that these formations are petrified trees, then how does that support the biblical stuff the author seems to be promoting?

If anything, doesn't this point toward a geologic time line and away from a biblical one?

I guess if one were to interpret the vague statement "there were giants in those days" and extrapolate flora as well as fauna, then sure... but ... but... never mind... sigh.

And 1/4 mile in diameter tree trunks... and then petrified? Puh-lease!

Entertaining though. Edit: and a few of the formations do indeed look like petrified trees (of a more normal stature) but I'd guess they were igneous vents pushing through sedimentary formations, giving the look of bark around trunks... but barring a closer look and more geologic and botanical education, I dunno. Editx2 Heh, or you could read GreenCross's post above mine to see a much more eloquent and educational look at these cool formations! Star for him/her. I guess this guy in the OP thinks Devil's Tower (the iconic Wyoming formation in Close Encounters) is a giant tree, too? Surprised it didn't appear here....

It really goes to show how the earth changes

The trees fruit had the ability to stop cell degeneration, a good theory I heard!

It would be amazing If the Tree of Life was a World of Warcraft style or Avatar style World Tree!

I've heard other things about the tree of life, like it could be a special plant that required special care and attention.

In Sumerian seals, their are some depicted a tree receiving care in the presence of the gods, maybe even fought over in some seals.\

Just google: tree of life sumeria
If interested in seeing any of those carvings and seals.

I highly recommend googling that, you will see a pattern! Not sure if it is related to these trees tho, since they aren't depicted as Giant trees.