An earthquake measuring 5.3 on the Richter scale has been recorded near the crippled Fukushima nuclear plant. There are no reports of damage to destroyed facilities and no spike in radiation levels in the area.

TEPCO, the company in charge of the cleanup operations at the site has said it is monitoring the plant and that so-far no irregularities have been discovered, according to the local media.

This cannot be good. The Fukushima area is already a hot mess. Even though there was no damage recorded yet I still think it should be noted. It still could be a bad issue if there is a aftershock felt at the site itself.

Not a big quake, but there you have it. 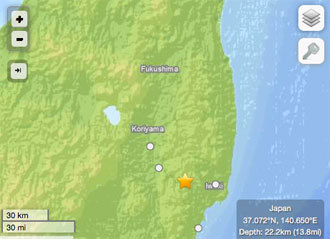 The tremors were felt in 17 prefectures around Japan including Tokyo, but the epicenter was 20 km beneath the surface on the Pacific coast but only around 50 miles from the Fukushima plant.

Earlier this month an earthquake measuring 6.9 struck the Izu Islands off Japan and was felt 400 miles away in Tokyo, but no damage was recorded at the Fukushima plant.


Man, that country is so screwed.

Matter of fact your post is right below the OP.

would they even tell us if there really was damage?? hope it wasn't a foreshock


Your link goes to my thread..

I didn't see the other thread in the "new news" section...


I thought ATS was a conspiracy site?

Why do folks feel the need to post MSN stories readily available to anyone who uses a computer ?


Don't get me wrong I like conspiracies just as much as the next person but with the whole Fukushima plant being part of the headline I figured I would put it out there. I know it is a topic of discussion for some ATS members, that's why I posted it.

Matter of fact your post is right below the OP.


This bodes rather ill to say the least of the matter! My main concern here, is that although TEPCo are reporting no new damage to the stricken plant, one would not expect them to do so. They have been reluctant to share information about virtually every aspect of the events immediately after the initial incident at Fukushima, so one would be forgiven a certain cynicism, regarding their ability, or for that matter, their willingness to be transparent about such things.

For all we know, that place could be cracking open underneath, and about to be swallowed by a gaping fissure in the Earths crust. I wouldn't trust TEPCo to tell me the time, let alone what new nightmare scenario is unfolding on the site of one of the worst nuclear disasters to have befallen the planet!


Thanks khimbar I fixed my link as well.

Thanks guys for link. It should be closing.