posted on Sep, 19 2013 @ 01:40 AM
link
Tonight I tried to watch a video on Youtube, and found that it was down. The entire internet is in a frenzy! People are so dependent on such social media that when general technical glitches occur, one would think that it is the end of civilization as we know it. Just take a look at some people's tweets: 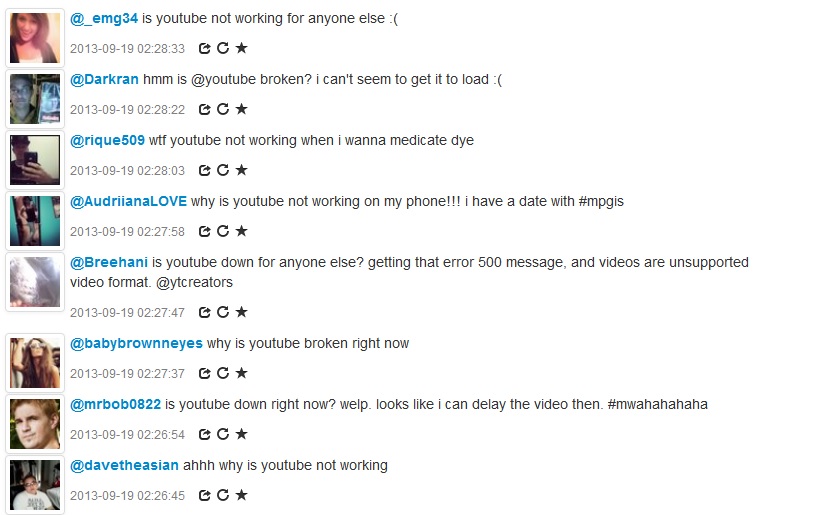 Could this be part of a larger conspiracy to bring down the internet? Are the Chinese invading? Has Alex Jones finally been banned from Ytube for good? Only time will tell.
edit on 19-9-2013 by AutOmatIc because: yep


Well it's back up now, whew, life can get back to normal...mods can deletion if wish.
edit on 19-9-2013 by AutOmatIc because: the world is safe again


Just imagine the whole internet down, your phone won't work, no one to twitter to - armageddon.

Also, your freezer is thawing, it's 45 degrees in your house and it's dark. Forget about your microwave.

Really, what will people do?


Just imagine the whole internet down, your phone won't work, no one to twitter to - armageddon.

Also, your freezer is thawing, it's 45 degrees in your house and it's dark. Forget about your microwave.

Really, what will people do?

Heh, well I remember being in Manhattan during the 3 day blackout in 2003. It was pretty crazy, no internet, no tv, no cell phones, no power at all. People walked out of the buildings up and down the block in a daze, like they all had just woke up from a long sleep. It was one of the coolest, most amazing weekends of my life. The cops let people party/drink in the streets...there were block parties, and I met and talked to people that lived in the building that I lived in that I had never seen before! Although by the third day with no deli coffee and the smell of rotted food being thrown out things started to get hairy..and people were quite on edge. Alas, the power came back on and everyone cheered! Amazing times....and I believe many children were born 9 months later!
edit on 19-9-2013 by AutOmatIc because: candlelight delights!
edit on 19-9-2013 by AutOmatIc because: spelling


See what we all could be! As I'm typing on the internet at 2:00 in the morning./sarcasm.

If we could all have the right mix. I know my nieghbors, it's good.


This is only the beginning.

I think people will just have to adapt,eh? I mean we got used to the internet+all it brought with it,we,at least most of us,were born into fortunate lives where electricity,running water+sewage is a given-yet there are billions all over the world that has to make do without any of these things,have never even known it-and they are managing,Also the Amish comes to mind.
So if we collectively had to be "back to the stone age" the vast majority will adapt-Needs must,as the old saying goes.
Back to the stone age may even spawn a world where people interact more on a personal level-and start realising we all need each other-it may lead to a more wholesome world in the end-and make it a helluva lot more difficult for people to be monitores+spied on.Which is why I very seriously doubt TPTB will ever allow the grid to go down permanently,even just for us peasants.They know in the long run us peasants will actually benefit from being back in the "stone age"-and they won't be able to monitor us , either.

posted on Sep, 19 2013 @ 02:11 AM
link
YouTube has worked for me tonight when I watched videos my daughter was texting me. My wifi cut out, but always dies each night anyways.

Go and do something else for a while like talking to someone, or go for a walk, read a book, the list is endless...

These are things that men and women used to do before the brain sapping internet came and made everybody into brain dead zombies...

Yeah, for all you zombie lovers out there, this is where the zombies will come from in the future...

posted on Sep, 19 2013 @ 03:43 AM
link
We have all become to reliant on the internet, prior to that it was the TV. If the grid went down maybe people would learn how to speak to each other again, what would those born after 1990 do without a mobile phone in their hands.
I'm old so I say bring it on, I know how to cook on a campfire and I am sure I could learn to hunt if I needed to.

Once it was "In the world of tomorrow. Man and machine will be one. Cyborgs.. Seek.. Kill.. Destroy.." and everyone screamed in terror.

Now it's "Don't be silly.. I'm not that addicted to it.." as they frantically tap tap tap and stare at the square of infinity.

Oh really? little missy? I think you are addicted to it. And if I were to *yoink* take it thusly, you'd be almost nekkid!

Damn it, I should have followed up with that bit.. woulda worked great.. oh well..


ps- I do not use a spelling checker. Nor a spell checker, as I do not cast spells. Ha!

posted on Sep, 19 2013 @ 04:05 AM
link
Definitely something up with YouTube. Even though YouTube is still "up and running", when I visit YouTube my browser is completely hijacked by "ad.doubleclick.net" (Do not click!). Happens in Firefox and Internet Explorer. Chrome seems unaffected. None of my PC protection (Anti-virus, pop-up blocker etc.) does anything about it... Doesn't happen on any other site, simply closing the browser "fixes" it, i.e. I don't see any permanent damage on the surface...
edit on 19-9-2013 by Gemwolf because: (no reason given)