posted on Sep, 18 2013 @ 04:26 PM
link
Back in the nineties, there were a couple of serial killers languishing in the death rows of Texas and Florida. They were Henry Lee Lucas, and Ottis Toole. They claimed to have body counts in the hundreds, if you'd believe them. Toole had killed Adam Walsh, son of John Walsh, of America's Most Wanted. That's why he started doing the show, believe it or not. 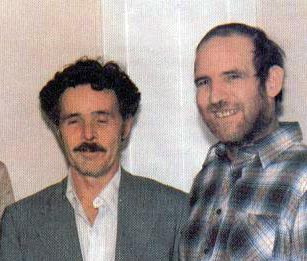 Now, these were sick, evil men. They were partners who killed for pleasure, to rob you, if you looked at them funny, or if they were just in the mood to kill for killing's sake. But the law caught them, and locked them up for the good of society. The courts gave them each the death sentence, and so, they were set to die.But they'd go on to cheat the gallows man.

There was a young governor some of you might recognize today, who commuted Lucas' sentence to life. And then, his brother commuted Ottis Toole. It seemed a tad unusual, but the governors were within their rights to use their power of commutation. And so, they lived for a while longer, growing old in prison cells with such normal prison amenities as a color television.

Why were these men spared, when they spared no one? Why were they allowed to live out their lifespans when they slaughtered uncounted masses of people?

Lucas made reference to a death cult he and Toole worked for. That they had trained out in the Florida everglades, studying the finer aspects of assassination, arson, and kidnapping. He made reference to another group of death cultists out in Juarez, Mexico who practiced similarly. A couple years later, the actions of the Matamoros death cult bear a chilling resemblance to his claims.
www.trutv.com...

Lucas claimed that this cult, or group, or whatever you want to call it, had high ranking members in the government. It's a little bit spooky to consider the implications of how Lucas and Toole were both commuted by two members of the Bush family. Future president, George W. Bush, and brother and hope to god never president, Jeb Bush. Now, there were around a hundred and fifty death sentences that George had the opportunity to commute, but the only one he signed while in office? That of Henry Lee Lucas. Why?

It seems like something is rotten in Denmark here. 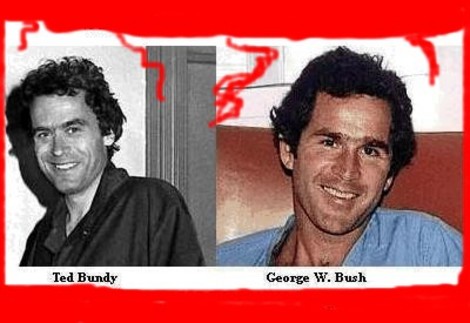 
Do you have a link to provide information from this and not 'just' your interpretation?
That would be helpful for a discussion. Links from law enforcement and/or major
news outlets ... something like that. THANKS.


I know nothing more than what I read in your post, but is it possible that commuting the sentence to life imprisonment was an extension of their sentence? The only reason I would be in a hurry to send them to hell is if that was the last place they wanted to be.

posted on Sep, 18 2013 @ 05:22 PM
link
Wow, I remember seeing years ago when GW Bush was governor of Texas that his "states" execution rate was vastly higher than any other state, by a very long way. I find it strange that he would commute anybody.
As for the mention of the death cult, I have heard that label applied to skull and bones also.
The resemblance between Bundy and GW is uncanny, pretty spooky actually, considering the number of deaths on the hands of GW.


Im off to bed now, but I will definitely being going through some of that information tomorrow.
Thanks.

posted on Sep, 18 2013 @ 05:42 PM
link
My first guess would be out of admiration and respect for the craft. Anybody can murder from the oval office. To sneak around as a civilian and rack up that many kills is a rare achievment.


David Berkowitz the son of Sam killer made claims that his shootings were done as part of a cult.
www.nbcnews.com...
This video has some information and attempts to make connections involving Lucas and Toole as well as possibly Manson. I never really knew about them talking about Adolfo Costanso so that's kind of interesting to hear about. I don't really know about these claims as most of the people making them are convicted murders who most likely have mental problems,


I think the mexican you referred to was palo mayombe. It was a true ritualistic serial killer cult. The cartel leaders would seek the leaders council and prayers for protection.
read about it here


whene witnesses were asked to describe the son of sam, all told, there four different descriptions. one was berkowitz. the other three descriptions of the killer from eye witnesses were vastly different. while berkowitz has a average height, stocky, broad shouldered build, one was tall and thin, one was very short and thin the other was just average. one was even described as being possible woman.

here are a couple of the sketches


Berkowitz also claimed that Sam Carr was in on it. Sam Carr was the neighbor that Son of Sam lived next to. He said that Carr and his two sons carried out many of the murders he had been charged with, and that they had brainwashed him into carrying out satanic rituals. Sounds crazy. Like the ravings of a lunatic. Odd, though. A couple of the Son of Sam sketches looked eerily like John Carr, one of Sam's other sons. I wonder...


You really do make an interesting point. And all the death trappings of skull and bones, and all the allegations of a certain segment of conspiracy theorists that some very powerful string-pullers in government may be satanists / cultists make this even creepier.


And yes, that is an uncanny and goosebump-inducing photo comparison between Bush and Bundy.


I better not have trouble sleeping tonight.


I have heard that as well, there was a documentary where he tell which people were involved in which shootibgs


While reading (but not finishing) your first link, it occurred to me that it might have been blackmail, perhaps a document left with his lawyer if he died, revealing the 'high ranking politicians' maybe someone in the Bush family line. Jeb Bush didn't move to Florida until 1986 but that doesn't mean anything as surely they would have come from many place

It also occurred to me that these politicians may not have been there not so much to learn to kill themselves but to make friends with those who do so as to use them later.

Or he could have revealed the CIA's role in the cult and the CIA pressured Bush to commute the sentence.

posted on Sep, 18 2013 @ 10:29 PM
link
earlier, i side tracked on berkowitz. as to the actual topic, it is VERY weird that he reduced their sentences. remember carla faye tucker? the pope and pat robertson got involved to try and have her sentence reduced. bush blew them off and even later mocked her when she was on the gurney. if he would not reduce hers, why for these two?

I'll get to the other one later that involves Lukas's partner and Bush's brother - meanwhile this post deals with the satanic killer, Henry Lee Lucas, who Bush pardoned while Governor of Texas, and who was also a member of that very same satanic cult in Brownsville Texas where 17 people were skinned alive and murdered in a satanic ritual. There are many stories on the internet........this is but one --->

G.W. Bush and family covered up all MKultra issues. Bush himself was arrested and was investigated for a least a year as a participant in those ritual murders, until his father, then VP G.H.W. Bush told then to drop the case, but as a result G.W Bush was forever associated with the satanic cult rings in Brownsville, Texas. According to the testimony of the police and the local sheriff, Bush was known to have been a member of the cult, and to have lived in the same house where the ritual killings took place. He was found wandering around outside the cult house in a drug and alcohol induced stupor on the morning of the murders.

The present thread connects GW Bush to the very person he pardoned while governor of Texas, Henry Lee Lucas, for ritualized killings and cannibalism. They both definitely were associated with the Brownsville, TX, cults.

The time was known as "Bush's Wild Years:" in the 1980s, and when questioned about his involvement - paraphrasing Bush - he told reporters and critics "I don't want to talk about those times - it was so long ago, lets just stick to the issues that matter." The then presidential candidate George W. Bush declined to answer all questions on the following Monday concerning his alleged involvement in the 1984 Brownsville, TX, incident ... ... ... "I will not stoop to discussing that,? said Bush.

Why was Bush, the son of a billionaire, strangely living in one of the most impoverished places in America, Brownsville TX. Bush inside the headquarters of a satanic cult of which he was a member. Bush disappeared for three days during which all of the other of his fellow cult members were slaughtered. After he reappeared he could not explain where he had been.

This story is intriguing in its scope because of who his father was as former CIA Director, and VP. Police involvement was quite extensive with a long investigative trail now disappeared, and filled with many allegations that fit the Bush crime family to a T.


George Bush just seems to project death. He's like Society's Charlie Manson. A stooge who tricked us out into the desert to kill people. Manson's got nothing on Bush's overall body count.

Now, there's a lot of talk over this Brownsville thing. I'm unsure as to how factual it is.
There is also this onion article, which lampoons Bush, who refuses to dignify mass murder allegations with a response, in regards to the 1984 Brownsville massacre. Now, did such a massacre really occur? I'm aware of the cult at Matamoros, but was under the assumption that Brownsville was an onion gag.