Sasquatch Sightings Across the US and Canada, Visualized

posted on Sep, 18 2013 @ 08:57 AM
link
I found this pretty cool info-graphic depicting 3,313 Sasquatch reports over the last 92 years. The graphic was put together by Josh Stevens using data from the Bigfoot Field Researchers organization.

Right away you can see that sightings are not evenly distributed. At first glance, it looks a lot like a map of population distribution. After all, you would expect sightings to be the most frequent in areas where there are a lot of people. But a bivariate view of the data (right) shows a very different story. There are distinct regions where sightings are incredibly common, despite a very sparse population. On the other hand, in some of the most densely populated areas sasquatch sightings are exceedingly rare.

I find it interesting that there is a huge increase of reports between 2000 and 2010. I'm sure increased population, the development of smart phones, and increased awareness are the reasons for the huge increase. My question is, with the uptick in reports and the overwhelming majority of people having a smartphone equipped with a camera, why have we not seen any reliable proof. I personally believe there is something to the sasquatch legend, but the question has to be asked.

Side note: I wanted to embed the images, but since the makeover, I haven't been able to upload anything. I've tried with large and small files with Internet Explorer and Firefox. I even tried from my smartphone. It just freezes. Anyone else having problems?

According to that data, Sightings peaked around approx. 2005 and surprisingly a large number of sightings occurred in the North East.

I always thought these sightings were limited primarily to the North West.

Here is the image for you: 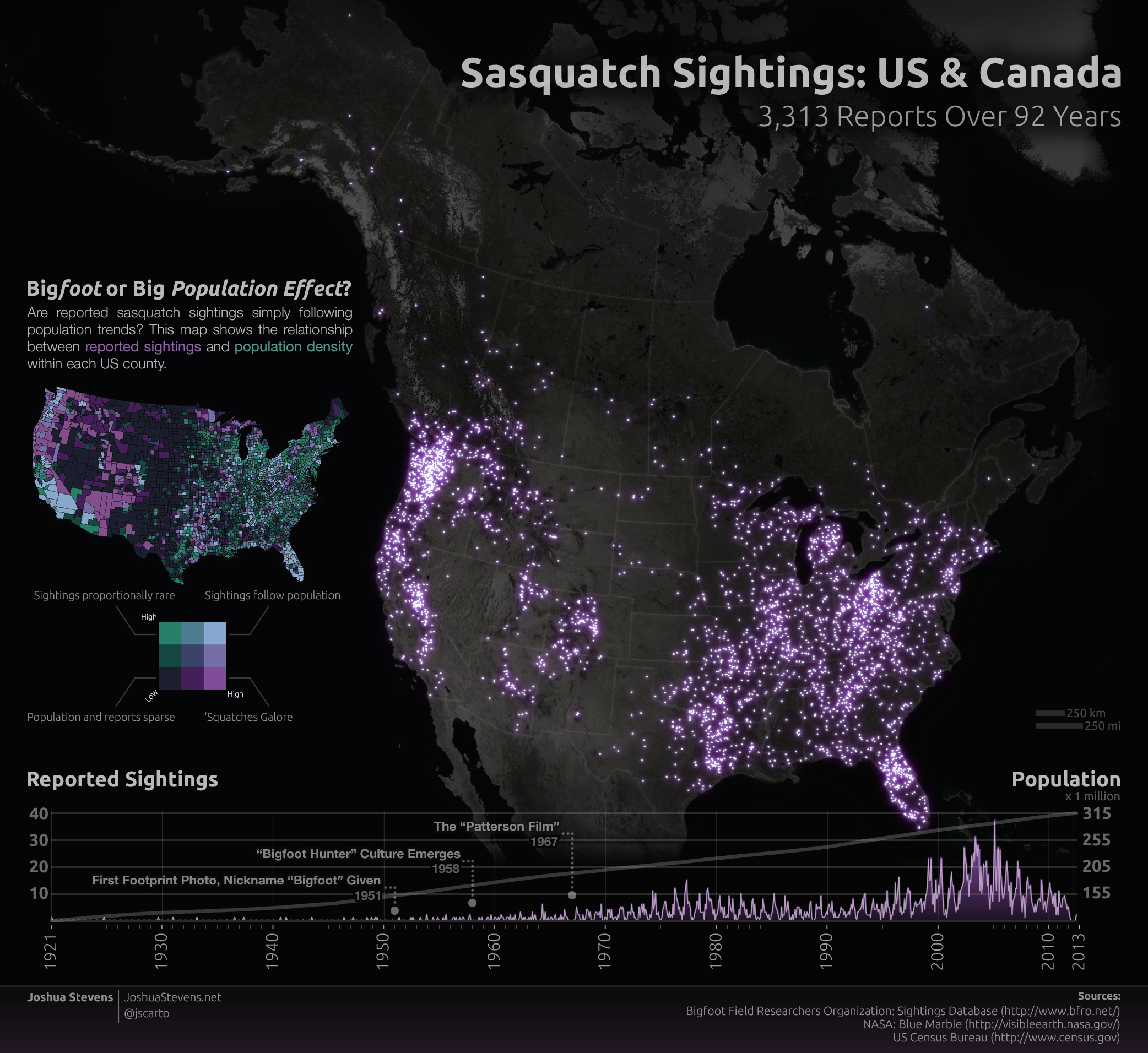 Sasquatch on vacation to the big city perhaps?
edit on 18-9-2013 by MDDoxs because: (no reason given)


Thanks! Perhaps there is a correlation between increased reports being in highly populated areas. Seems sensible.

I take it there were no problems uploading the images for you. Wonder what is causing my problem?


And conversely, the greater the population density, the more likely it is that a higher number of false reports will be made.

I had no trouble uploading the photo. Just saved it to my computer, uploaded to ATS and posted.

posted on Sep, 18 2013 @ 10:14 AM
link
I didnt know cryptids could become endangered without being discovered first?


I always like the bigfoot stories, even though I refuse to accept it's real. A friend of my mom's lived in a fairly rural part of Ohio, south of Cleveland and told a story of hearing a haunting scream just before seeing a glimpse of what he described as bigfoot. Without pictures, or any evidence, all it will ever be is a story.

My disbelief comes from the multitude of sightings, yet to date, no evidence. None. (unless you count the Patterson film, which is still controversial.)

Not even a pile of dung. Everyone's gotta go right? Wake me when someone has more than a costume with raccoon guts thrown on it.


This is exactly why I joined thank you for posting the graphic, this will help me plan better trips.


And conversely, the greater the population density, the more likely it is that a higher number of false reports will be made.

I had no trouble uploading the photo. Just saved it to my computer, uploaded to ATS and posted.


My bet is that Sasquatch homeland was where the European settlers first built the city's. That would explain why the reports are increasing, the bigger the city, more people and therefore more witness. They don't seem to want ot live their homelands. These creatures probably live on hot areas, or perhaphs North USA is way too much wild for any big number of reports.

But the highest probability is that USA population increased a lot in 500 years and therefore the chances of people spoting the animal has increased.