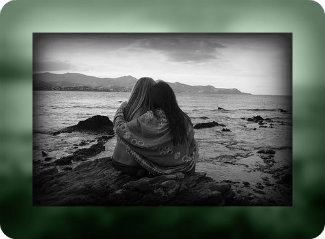 AUGUST 1980
Sarah squealed and giggled as the icy water sloshed up between her bare toes, half covering them in brownish red sand.
"Oh, it's freezing today! Hailey come here!"
It was a chilly evening in late August,the first cool breaths of autumn had settled over the tiny island.This was the last weekend of many, that the two girls had spent here on this beach. It was the year they both had their tenth birthday, and the third year coming here on vacation with their parents.This was the best time, the best place, to be young, carefree, and happy.
The frigid sea sent them running to the contrasting warm sand, till the rough grains between pruned up toes, sent them back again.It was a game they played, laughing, running, splashing, dancing, till they grew tired and started walking along the shoreline indulging in their favorite pastime- finding seashells. Daily they had this ritual of combing the beach and filling their pockets to overflowing with the cast-offs of the ocean. It was their greatest treasure. Who found the most,the biggest,the prettiest;all summer it never ended. Each girl had buckets full of their favorites. Hailey treasured the gemstones of sea glass, while Sarah loved the swirls of snail and crab shells.
As they walked, leaving bare footprints in the sand, the tide swelled up and washed them away.The waves became higher and white foam now edged closer to their feet. The sky turned from golden yellow to a dim grey, and high above from the cliffs a cold breeze blew. The shrill cries of the gulls disappeared in the distance as they flew away.The beach had become a universe unto itself, with the sun setting at one end, and the moon rising at the other.
It was Hailey who first spotted the intrusion to their blissful evening." What is that? I've never seen that much before."
A Fog...thick like no other. A wave, an avalanche,rapidly rolling down the cliff.It came cascading like a pure white waterfall of fresh down, blanketing the sandy shore.It completely covered an entire span of the beach in front of them, rock cliffs and ocean waves alike.
Sarah, was mesmerized. Hailey was trepidatious.
Sarah, always the daring one, grabbed Hailey's hand and yanked her hard towards the now hidden stretch of beach. "Come on! Let's go closer!"
The fog became a luminous entity. It churned, rolled, twisted and danced in circles before them. Smokey tendrils reached out like fingers, pointing to them and coaxing them closer.
Sarah tries to bolt for it as if the wind blew in a giant cloud of cotton candy, oblivious to Hailey's look of dread.She pulled harder on her hand, and Hailey was certain Sarah was trying to dislocate it at the shoulder. She almost hoped she would, so that the rest of her body could stay at a distance.
"Stop!" Hailey whimpers, "I don't want to go!" It didn't feel right. Suddenly her stomach was fluttering with a hundred butterflies.
But Sarah, having no fear for as long as Hailey could remember,only shrugged,and dropped her hand.
" Just let me run inside and see what it's like. I'll be right back. You don't know what you're missing!" She laughed and she ran from Hailey's side and into the misty outstretched fingers that Hailey was certain she saw clench into a fist as they enveloped her best friend.
The sea breeze blew, and she waited. The waves behind her now crashed on shore more forceful than ever, and she waited. The white haze, hung suspended, completely still, whereas before, it moved swiftly towards the water.
Slowly taking backwards steps to keep herself safe,Hailey strained her eyes for any sign of Sarah. Nothing. She saw nothing. She heard nothing.
"Sarah!" she called out." I want to go now!"
Silence. But the fog began to dissipate.What was once blocked from her vision, now she was able to focus.The cliffs and the treeline beyond the beach were no longer shrouded.
"Sarah! Sarah Please!" Her voice now shaky and panicked. The sun had set beyond the fog and the moon was higher now, the sky much darker. The beach was not that long and she was sure that her friend could not have wandered far enough away not to hear her. By now the far side of the beach was visible in the murk and the fog that remained hovered over the waves and drifted out to sea.More and more as the tide rose, she could clearly see that the fog was gone,and so was Sarah.
She frantically looked all around her...the beach, the water, screaming for her lost friend. Was this a joke? Was she hiding, only to jump out and scare Hailey to death? There was no answer, no sign, no sound but the Atlantic between her toes and the cormorants resting on the newly uncovered cliffs.
She looked down at the sand,about as far as she could remember it was the last place she saw Sarah, before she disappeared, and there, in a small neatly stacked pile, were the seashells from Sarah's pocket.
Hailey could not stop the torrent of tears from her eyes as she ran crying for help......

Continued next post
edit on 18-9-2013 by AccessDenied because: insert title

edit on 18-9-2013 by AccessDenied because: punctuation


Thanks TrueBrit! Once the darkness starts flowing out of me, it's hard to stop. That's just my style.

What an extraordinary story, AD. That was very special. The sadness, the regrets, but above all, the closeness between the two friends -- it was very moving.

Thank you for sharing this with us.


Hello Mike. Thank you for the comments. They say, write what you know...well right now the sea is what I know.

I thought there for an instant the mist would get the younger Sarah as well, and was holding my breath as I read. Nice ending.


Oh, believe me Druid, I had almost thought of adding that element to the story, but couldn't figure out where to take it from there.

AboveBoard
A dark read, indeed! I was so hoping the mist would release her! But then what??
Like Druid, I thought the daughter might be carried away as well, but I'm really glad she wasn't...


I almost took it in that direction, but at the last minute...