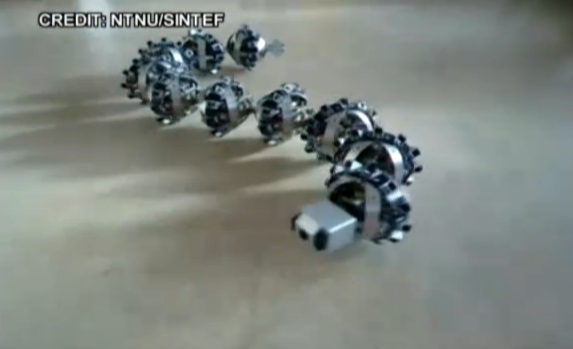 Snakes are crafty animals. They can be found slithering in the desert, swimming in the ocean and even flying in the air. But how would they deal with another planet altogether?

Researchers at the SINTEF Research Institute in Norway and at the Norwegian University of Science and Technology aren't planning to launch the legless reptiles on a spaceship, but they are using them as inspiration for a new type of Mars exploration robot. Aksel Transeth, a senior research scientist at SINTEF, along with some of his colleagues, are conducting a feasibility study for the European Space Agency, examining how a snake robot would fare on the red planet.

"We started the study back in June and will finish sometime in December," Transeth told ABC News. The study is more like a written report than it is a series of experiments, he said. However, the ideas on paper could make its way into a prototype within a few months.

2. One instrument this would need would be some sort of transmitter to get the data from the "snake" to some other sort of relay craft, so the data could be transmitted to Earth. These transmitters are larger than this snake could handle.

3. What would be the power source? I assume the prototype in the video runs on batteries of some sort, which would not last very long (would they last long enough to be worth the expense of sending it to Mars?).

Granted, these issues may be solved in the future as technology gets better, and power sources, scientific instruments, and transmitters shrink in size, but I can't see that happening anytime real soon.

Maybe one solution to the issues I raise is for this to be just part of a mission that consists of two probes (a "base" rover and this snake rover), where the snake stays relatively close to the base for transmitting purposes, and could maybe dock with the base for battery recharging purposes.

In that case, the snake would be available to the rover to peer into the occasional crevice; however, are there enough crevices on mars that need peering into that would make this snake worth the expense and effort? Maybe a skinny multi-articulated arm on the rover could do the same "crevice-peering" job as the snake.

Why stop at snakes? With all the newest drone technology "they" can send a few hundred tiny drones in one launch (in fact, pack a payload with a new Mars Rover, a couple of hundred drones, a dozen of these snakes, and a partridge in a pear tree). When it reaches Mars they can all be sent in different directions, fly up to the highest peaks, and explore the deep canyons of our sister planet.