The Costa Concordia was finally pulled upright in the early hours this morning after salvage teams worked through the night in a painstaking 19-hour operation to right the stricken cruise liner.

WE DID BUILD THE PYRAMIDS>>>>

Okay so here we are In ocean ...build a huge Cradle to sit this thing on in a upright position....attach huge ballasts to it....and are going to float it....There should be no doubt what man can do....I rate this feat of engineering well and beyond anything we have done to this day. 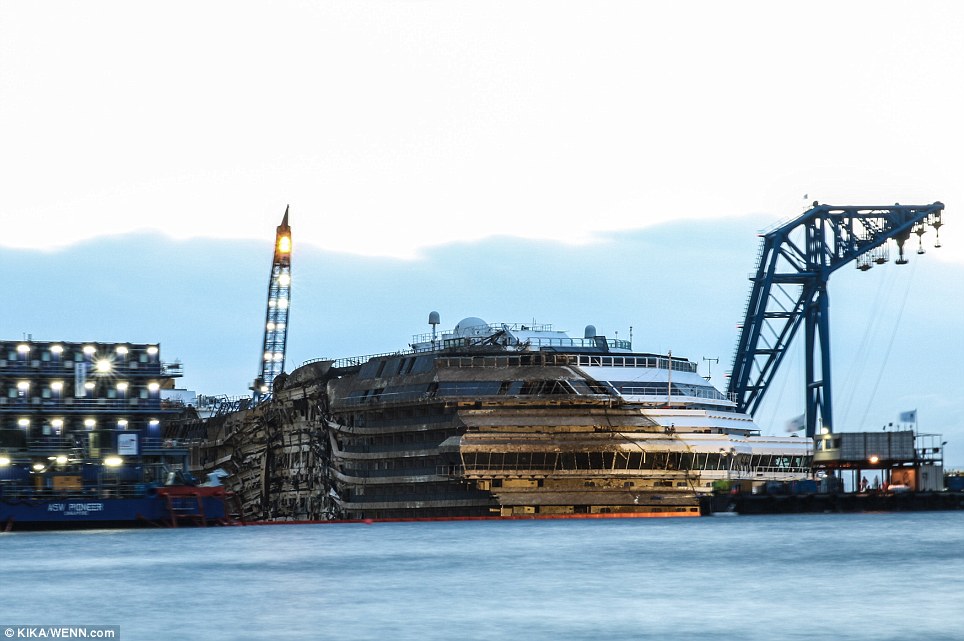 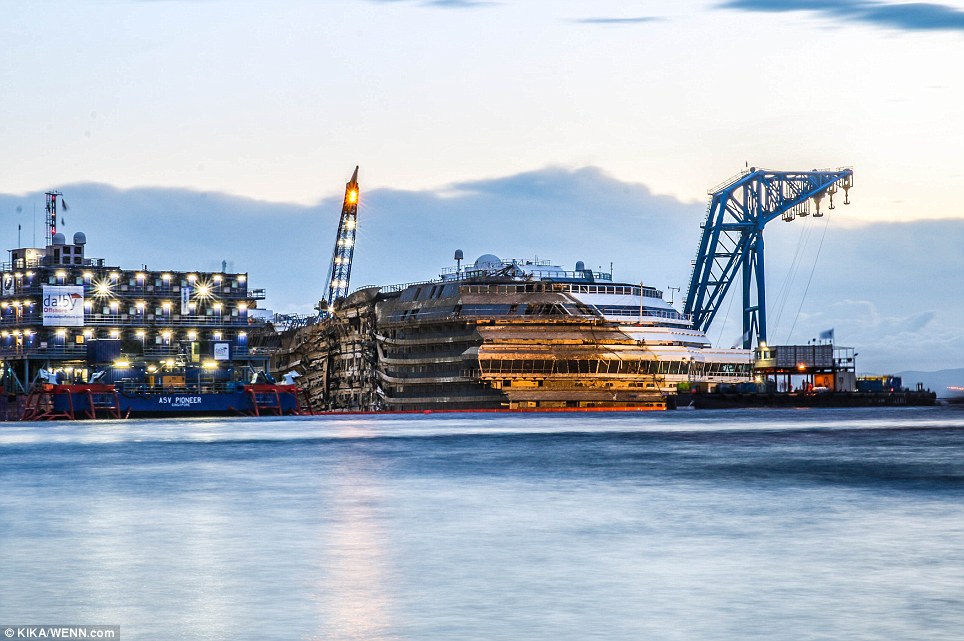 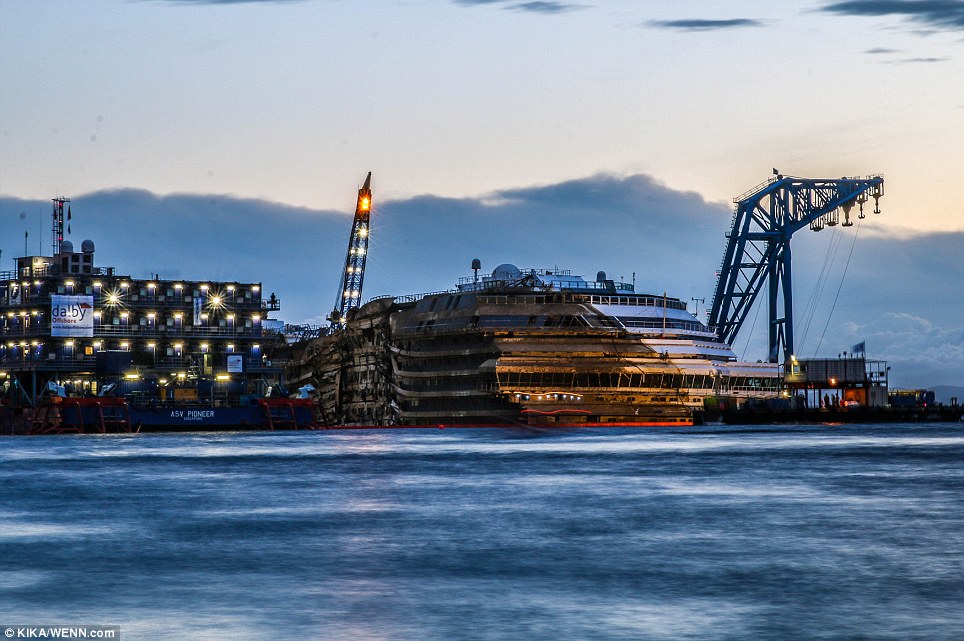 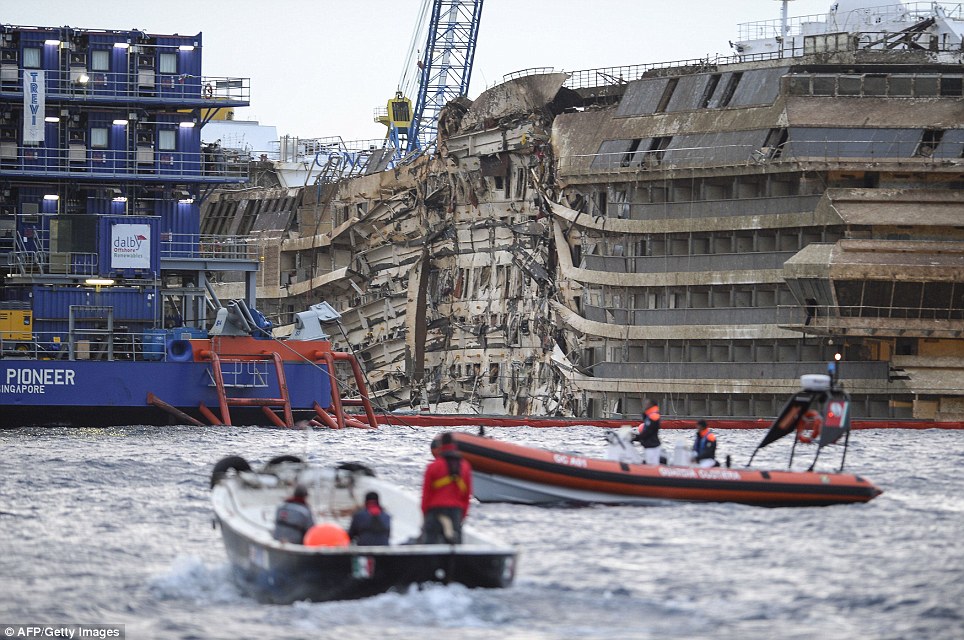 There are just to many great photos to see on the site.....Check it out....And be proud to be human.

I think they are fantastic to...

Thanks for that post. WOW!. I beginning to wonder just how fast and hard over the ship had been turning when it struck! I wonder if that damage on the side was caused by the ship rolling on it's side or a kinetic impact from being slammed over on it's side, very quickly! Either way the captain deserves to be in jail. thanks again.

posted on Sep, 17 2013 @ 02:52 AM
link
I have seen a few sites saying that the ship is worth 4 billion so i checked some more and found 500 million. Does anyone know if its going to be scrapped or rebuilt? It was an expensive salvage wow maybe they should have just pulled the eyesore out to sea and let it sit on the bottom. Anyways can someone enlighten me on what value it has as scrap. Thanks. SnF


Does anyone know if its going to be scrapped or rebuilt?

The £500million salvage effort is said to be the largest in maritime history, but there will be no saving the £370million liner - destined for the scrapyard

The Concordia is expected to be floated away from Giglio in the spring and turned into scrap.

plube
Okay so here we are In ocean ...build a huge Cradle to sit this thing on in a upright position....attach huge ballasts to it....and are going to float it....There should be no doubt what man can do....I rate this feat of engineering well and beyond anything we have done to this day.

Amazing indeed but "well and beyond anything we have done to this day"? You mean the Voyager crafts, the Space Shuttle, many of our submarines, buildings with gigantic pendulums built into them to counter the effects of height and wind effects, the internet, etc, etc...none of those compare to what you believe to be the apex of human ingenuity?

Don't get me wrong, it is amazing, but I think it pales to our recently achieved feats....like sending a robot to Mars, deploying not only a parachute, but a controlled landing to safely deliver the payload....to me that is amazing.


The people that have to go in there to clean out the HazMat have my respect, even though I think that they may be a bit touched. LOL

That is going to be a nasty mess before they cut her up. It's gotta reek.


Another thing that tops the concordia, sending a probe to Mars, and MISSING because someone didn't check they're math. Now that's impressive! How about this for an impressive feat of ocean salvage:


Also, you might want to check out the "Il de France" salvage from WWII

amazing what they can do nowadays with technology


I hope not -- the pic is of Brother Nathanael, a religious whack-job.

Thanks for the pics, OP, glad that they got it upright without it splitting apart. For those wondering why they spent all that money to salvage something that is probably not worth it in scrap, with the fuel and other hazardous materials in use these days, you can't just let 'em sink to the ocean floor anymore (provided you have a choice.)


This really is an amazing piece of engineering and i suspect that the South African guy in charge has just become the most sought after salvage guy anywhere in the world.

However (and sorry for putting a dampener on this truly astounding piece of engineering) why did they bother? The salvage operation has so far cost more than the ship cost to build. I am a complete novice when it comes to salvage operations but surely that is a massively false economy of scale? Unless.....duh duh duh.......there is something on board that we do not know about? (sorry, couldn't resist throwing in a conspiracy angle!).


I have read many sources not just the one linked and thats why i asked. The news also said they havent made a 100 percent decision until they were able to inspect it above the waterline. So like always a smartass remark for a regular question.

However (and sorry for putting a dampener on this truly astounding piece of engineering) why did they bother? The salvage operation has so far cost more than the ship cost to build.

One would imagine that the ships owner would be forced to move the wreck off the rocks, while the large majority of the fuel and engine oils have been removed from the ship it is still a very high ecological and safety risk for others in the region. As the OP's source mentioned, one threat is from the rotting foods below deck which have the potential to leak out.
Paying compensation for a large oil-leak which would be expected from a ship wreck without being drained may cause large oil slicks similar on a smaller scale to the BP incident in the Golf where compensation for damages caused to the affected region far exceeded the initial disaster.


Its impossible to determine if the ship can be refitted an used without an indepth investigation on exactly what is intact and what isn't as-well the insurance verdict.
We can safely speculate their is extensive structural damage, to the starboard side of the ship crushing against the rocks. Due to half the decks being submerged below the waterline for an extended amount of time we can imagine that the vast majority of the furnishings are destroyed alongside electrics and possibly the engine decks.
My best guess would be that the ship will be re-floated and repaired to a condition where it can be towed then scrapped.

If the ship had completely sank in deep water this would be another story and most likely it would be left at the bottom of the ocean.


Sorry if I get a bit excited about this....It is just from my engineering perspective that I see what the monumental task involved in raising this ship off the ocean floor....building cradles on the ocean floor to support the ship...deploying booms to contain the oils and fuels from the ship....the risks involved in rolling it over....knowing how much more it weighs in at compared to the titanic....and actually....compare to sending any craft off earth this tops that in my opinion....it is not about the building aspects....to me it is the risks involved that tops it....the working conditions....and all the factors involved to make sure all is right before you even attempt the task of up righting the ship...maybe it is just me....but being an engineer...I see all the possibilities of failure in such a task.....also having worked underwater myself I know all the risks involved...It is a lot different than working in a clean room in NASA.....Also NASA has had many fails before they get things correct....

Also no I am not Brother Nethaneal....but by the same token as another poster said.....he is not a religious whack job....and his views on the Zionist ruling class are spot on in my opinion....so lets stick to the feat of engineering brilliance that this is.