The Aluminum Airship of the Future Has Finally Flown 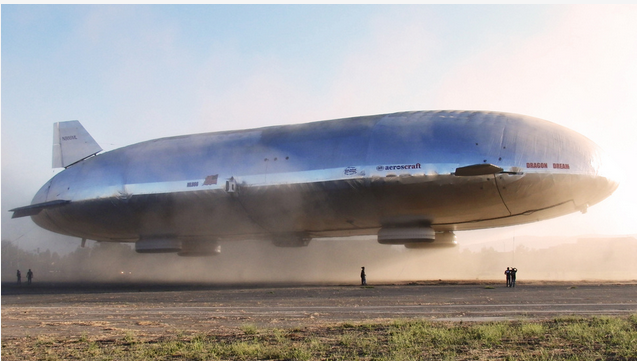 There was once a time when man looked to the skies and expected to see giant balloons rather than airplanes drifting above. The Hindenburg Disaster promptly put an end to those dreams. But nearly a century later, one company may have finally figured out how to build a dirigible suitable for the 21st century. Just don't call it a blimp.

This fully rigid airship, dubbed the Aeroscraft, differs fundamentally from, say, the Goodyear blimp. Blimps, by definition, have no internal structure and maintain their shapes only through the pressure of the gas they contain; when the gas escapes, they deflate like the gigantic balloons they are. Rigid airships, like zeppelins before them, maintain their shape regardless of gas pressure thanks to an internal skeleton structure—the Hindenburg utilized highly flammable balsa wood, but the Aeroscraft's is made of aluminum and carbon fiber—and maintains its buoyancy with a series of gas-filled bladders. And unlike hybrid airships, the Aeroscraft doesn't require forward momentum to generate lift via a set of wings. It's all helium power.


This is a huge new discovery for me

It looks similar to Lockheed-Martin's P791

What ever happened to that other variations?

remember - the peole behind the cameras and the guns and the armored trucks are just dudes.

They aren't "special" people or "heroes". They are dudes just like you and your cousin Larry.

You trust Larry with your life?

Then why would you trust anyone else?

These things are NOT cool.


This is cool! Thanks for sharing OP!


It's the technology that's cool, not the usefulness of the craft.


Reading this reminds me of something I had read years ago about using them for cargo transports here in Alaska, from major cities like Anchorage and Fairbanks to the outlining villages. It was supposed to be more fuel efficient as well as able to transport more cargo in shorter time vs conventional aircraft and river barges. For those of you who do not understand why we do not transport via ground as in trucking or railroad, unfortunately Alaska is limited on its road an rail infrastructure. Most cargo is flown in via small propeller aircraft or up rivers on barges making it expensive and majorly time consuming.

I wonder if this is the same company that was discussing this before, looks similar with the cargo ramp idea...


Wow its great :O I thought this one is first.Nice finding there man.


I just love the technology, It can be used in various ways...And if you will see the past madame curie discovered radioactivity.

"Lets make a huge blimp that looks exactly like a flying saucer that can be seen from flippin miles away, then leave it shiny aluminium so it reflects for hundreds of miles....." Cant you imagine how far this will freak people out?


I think they built this purely to discount any and all UFO reports.
edit on 16-9-2013 by Biigs because: (no reason given)


Maybe yes man, flying in sky with silver will surely give discounts to ufo if this craft gets famous and everyone start using it lol.


Maybe yes man, flying in sky with silver will surely give discounts to ufo if this craft gets famous and everyone start using it lol.


think about it, just fly one near the test ranges and boom, every single UFO thats spotted can be blamed on this thing


Reminds me of the Hindenberg. Doesn't look much like the future to me.

I think they built this purely to discount any and all UFO reports.


The following is my opinion as a member participating in this discussion.
Nah. If 'they' wanted to do that, it would look like a big Chinese lantern.

Yes park it in Area 51 and you're free to answer any question easily.

Eventually, the company hopes to produce a trio of Aeroscraft models: the 66-ton capacity ML866, the 250-ton ML868, and the 500-ton ML86X. There's even discussion of turning them into giant floating hotels for serene 80-day global circumnavigations.

Something that is sorely needed in many places of the world. The article did not mention the top or cruise speed; only the small control surfaces being effective above 20 MPH. If this thing or the ones to follow can cruise at or above 150 knots ( I don't think so but would be awesome ) what a great invention. If I had to bet it will do around 45 kts cruise and maybe 70 knots tops.... Hope so....


Do you think it matters with naked eyes and 1000fts above.

posted on Sep, 16 2013 @ 12:30 PM
link
I thought there was a helium shortage. Maybe we only have a shortage because they want the helium for these ships. Well, so who cares if people can't afford to buy their kids helium balloons anyway. I still can't understand how there could be a helium shortage. Maybe there really isn't. maybe they want to raise the price of helium balloons.

... oh no, but if we do that and the UFOs start doing that too they also can hide! damnit! its lose lose.


why oh why did they have to leave it silver.

"Lets make a huge blimp that looks exactly like a flying saucer that can be seen from flippin miles away, then leave it shiny aluminium so it reflects for hundreds of miles....." Cant you imagine how far this will freak people out?


I think they built this purely to discount any and all UFO reports.

Dude...Battle of Los Angeles. Basically, a huge oblong silvery object off the California coast took literally hours worth of military firepower so intense that it was like ten firework displays happening at the same time, and still never came down. I didn't even make the connection until you said that. Ironically, George Knapp is going to be doing an AMA here tomorrow - I believe he has done a significant amount of research on the subject.
edit on 16-9-2013 by AfterInfinity because: (no reason given)


Bro we will borrow helium from our sun