posted on Sep, 16 2013 @ 08:35 AM
link
I know that Rezlooper covered some of the recent animal attacks in the USA..I tried looking up previous cases of rapid animals actually chasing down other animals/humans..but couldn't find any. From just skimming the topic..it does appear that this is a new symptom--rapid animals usually do not seek out and then chase down things to bite..these animals (in the news reports) appear to be seeking out others and being very aggressive...

so I will add some links for you..this could be nothing..could be something...If you search rabid animals in google and then go to the news section..you will see a uptick in rabid animal attacks..I am no vet and other than reading what's online..have no real experience with rabid animals...just putting it back out there for discussion..could a zombie apocalypse really happen?


I would say not at all...lol...good question though... Demons are the reason for the upgrade of rabid animals...part of ther plan...now if you would like to call a demon a zombie....then i would say yes....

posted on Sep, 16 2013 @ 09:35 AM
link
I agree with you that rabies doesn't quite add up and explain what's happening with animals. There has always been rabies but how often have we heard of so many different animals attacking humans. I would like to post my thread about drug-resistant bacteria and mutating viruses here again because IMO that's what may be happening here...mutating viruses.

Dangerous Gas in relation to drug-resistant bacteria and mutating viruses


I didn't see the rabid raccoons story on the tv..I was picking my girls up from school and listening to NPR. The way the people described it (first witnesses and the attacked victims themselves) basically said that these animals kept chasing them down. One was at a park with her kids and she said the raccoon chased them all the way home..she had to use a backpack to keep the animal at away until they went through the door. The animal kept chopping at them. From the older reports of rabid animals that I have read none of them stated the animals kept going after them in an aggressive attacking chopping manner..so that is what got me thinking and reading.

I don't know what is going on but it was the foxes 2 weeks ago and now raccoons this past week..all in different areas of the country. Both times the foxes and raccoons seem to have the 'new' symptom of actually chasing and seeking out humans to bite. I think I heard the lady on NPR say that they basically have a shoot to kill all raccoons and foxes now. Rabid or not..people are to kill them on sight..which is sad..Foxes use to come up in our yard all the time..they are just curious and didn't look rabid to me.

I didn't catch the whole story because I had to get out to sign my daughters out of school..but maybe I can find the transcript from the program..

here are some screen shots of RSOE--if you look at the date you can see they are either picking up or being overly reported? 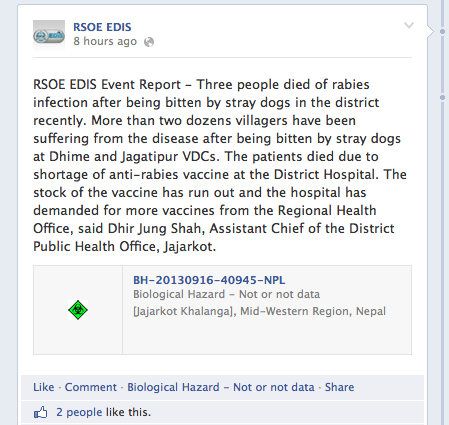 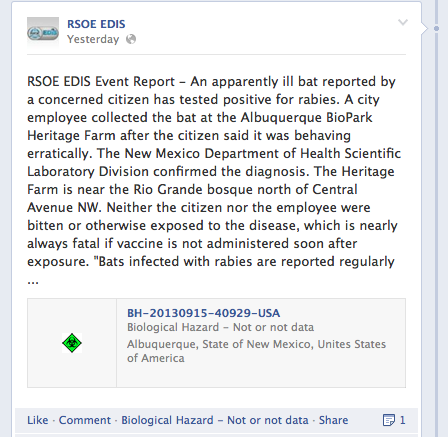 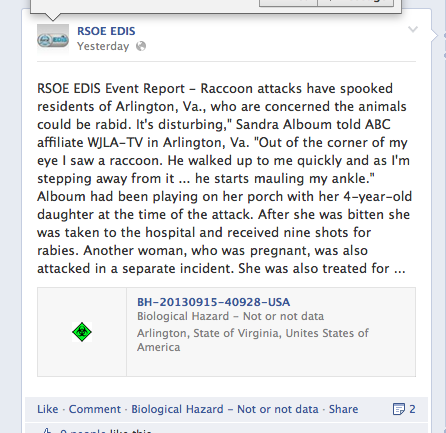 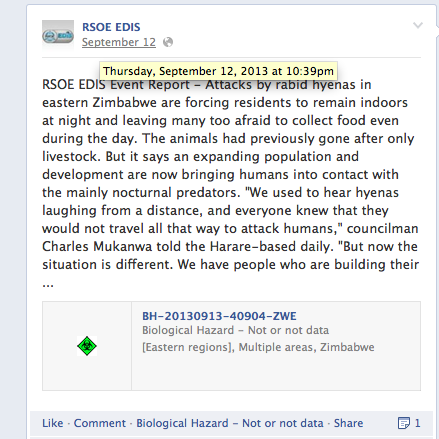 posted on Sep, 16 2013 @ 10:15 AM
link
Earlier this summer a fox entered a neighbors garage during the day and attack him as he layed under his car working on it. The fox didn't break any skin because he reacted fast enough and he had on thick pants. Later I found out that this same fox had chased three other neighbors back into their homes earlier that day.

I was getting ready for bed that night and heard it outside my home. It was barking repeatedly and running everywhere and circling trees in the yard. I managed to shoot at it but was never certain if I hit it because it ran off. It was found dead the next morning in the road below where I live apparently ran over. I'm guessing it ran at the vehicle because it's extremely rare to see a dead fox in the road around here.

A week later it happened twice in a neighboring county.

If you see a primarily nocturnal animal during the day then its best to avoid it at all costs because something's wrong.

One of the symptoms of Rabies is hydrophobia, the fear of water, so I think all the rain we had this summer may have kept the epidemic from spreading further. Just a wild guess though.

Before this I had never encountered a rabied animal so to hear of three incidents in a week was a brow raiser for sure.
edit on 16-9-2013 by TheLieWeLive because: (no reason given)


Where abouts do you live? Are you nearby to the Stanhope, NJ case of the attacking foxes that I posted in the other thread on this subject?

Once again, most people are ignoring the things happening around them. Many strange phenomena are happening all around the world right now from animal die-offs, sinkholes and fireballs to extreme weather and temperature changes, mysterious fires and unexplained explosions, not to mention all the strange sky noises and sonic booms. And now we have animals doing things they had never done before, like attacking humans in broad daylight within not only rural areas, but urban areas as well.

What have we seen acting strangely...foxes, pigeons, sharks, bears, wolves, beavers, and now thanks to your thread we know about raccoons, hyenas, and three humans dying of rabies in one Nepal town thanks to rabid stray dog attacks. Also, curious about the sick bat...aren't bats known carriers of rabies so why would they act sick from it? Could this be a case of a different form of the rabies?

I'm sure there are many more animal cases we haven't listed here yet. Remember the thread earlier this year about the strange animal (or demon) attacking goats and cows at Shelby, KY farms. That one remains unexplained, but wildlife officials blame that on a wild dog. Most likely, a dog infected with the same thing these other animals are experiencing.

Dangerous gases people are causing viruses to mutate. That's why we have so many newly discovered or otherwise old viruses popping up right now, such as the Bubonic Plague in Krygstan, the different bird flu's in China, norovirus outbreaks, hepatitis A outbreak, new H7N9 and MERS coronavirus outbreaks, the new Sars like NcoV coronavirus in the United States, fungus outbreaks, well anyways...the list goes on!


First, you may be asking yourself how diseases and pandemics have anything to do with dangerous gases and atmospheric heating. It’s simple really. There are various types of microbes that eat methane. They live deep underground and they live 30,000 feet into the air. Basically, they are everywhere and they feed off methane hydrates.

posted on Sep, 16 2013 @ 11:06 AM
link
Rabies does cause unusual behavior in animals, and may cause aggression (anyone remember "Old Yeller"?)


I'm in Western North Carolina so a bit south of New Jersey. This shows you how spread out this is. I haven't heard a report in a few months but that doesn't mean it's not happening. The fox incident we had was reported to the authorities but they didn't do anything since the animal was already dead. They wouldn't even come out and pick the body up for examination which infuriated me. They acted like they would send someone out but they never came.
It wasn't until a week later that it was taken more serious when the neighboring county had two incidences of rabid foxes also. That county is better at handling things than the one I live in.

We had lots of rain this summer so that's why I think it may have died down a bit. Since rabid animals can have a fear of water all the rain we got could have stifled the spread.

I haven't heard of any more animals having it which I'm thankful for since their are more bear in the area the last few years. Imagine a bear or big cat getting infected by this.

Here is a news report back in May of one of the attacks in a neighboring county.
A Hendersonville woman was attacked...

Neopan100
I know that Rezlooper covered some of the recent animal attacks in the USA..I tried looking up previous cases of rapid animals actually chasing down other animals/humans..but couldn't find any. From just skimming the topic..it does appear that this is a new symptom--rapid animals usually do not seek out and then chase down things to bite..these animals (in the news reports) appear to be seeking out others and being very aggressive...

I am sooooo confused....(?) animals w/ rabies do go after people. They will attack anything or anybody. Remember Cujo!? ( ok ok bad joke ) but I am perplexed at people saying rabid animals don't attack... They certainly do attack and if your in their sites.... Run!

Byrd
Rabies does cause unusual behavior in animals, and may cause aggression (anyone remember "Old Yeller"?)

Population density is always the easiest answer for these things we don't understand, but was it population density that caused the first known wolf attack on a human in the continental United States when he climbed into a teenagers tent and tried to bite his freakin' head off? Maybe? What I don't understand about this excuse is why now and why today? All these phenomena that I have been tracking have been only on a major uptick in the last year or two, so why now is all of a sudden more population and better internet the reason? We've had internet for nearly two decades now...many news channels since the mid-90's and we've been over 6 billion people since I was a child, and I'm 41 now. So, we billions of people have been living with all these animals for decades, yet, now we are hearing of all these strange happenings...sinkholes that actually swallow people sleeping in their bedrooms, fireballs that explode over major cities, sky trumpets, house-skaking booms, mass animal die-offs by the day, more and more disease outbreaks, chemical plant and home explosions by the day, rabid animals and, well, I could go on but I'll stop now, I think you get the point.