Privacy: the final frontier. These are the voyages of the NSA, as it enters every computer and pries whatever data can be stolen and recorded in perpetuity. Its ongoing mission: to explore the internet and all TCP/IP packets, to seek out new emails, phone records, backdoors, webcams and bank accounts, to boldly go where no man with or without a search warrant has gone before.

Those who will recall our brief biopic on the "Meet The Man In Charge Of America's Secret Cyber Army" remember that before Keith Alexander was put in charge of the NSA, he "was a one-star general in charge of the Army Intelligence and Security Command, the military’s worldwide network of 10,700 spies and eavesdroppers. In March of that year he told his hometown

Detroit is decaying. Chris Hedges has shown how American towns are on the edge around the country. 1/3 of the country is on food stamps and disability...

No problem.... Capt. James T. 'Keith Alexander' has built himself the helm of the Enterprise so that he can spy on your grandma's telephone calls and internet views..... Staggering grandeur... opulence... fit for the Emperor of Privacy.

From Zerohedge.. via Glen Greenwald we may muse the following quips.. 'we now have a glimpse of just how Star Trekishly the megalomaniac intercepting all US and global electronic communications and financial transactions thought of himself'..

' Any casual review of history proves how deeply irrational it is to believe that powerful factions can be trusted to exercise vast surveillance power with little accountability or transparency. But the more they proudly flaunt their warped imperial hubris, the more irrational it becomes.'

Zerohedge story is out today... I have not seen this story posted... Please provide the 14 year old article... thanks..

I have not... and many other readers likely did not know that Gen Alexander built this for himself... Did you?
edit on 16-9-2013 by R_Clark because: Grammar 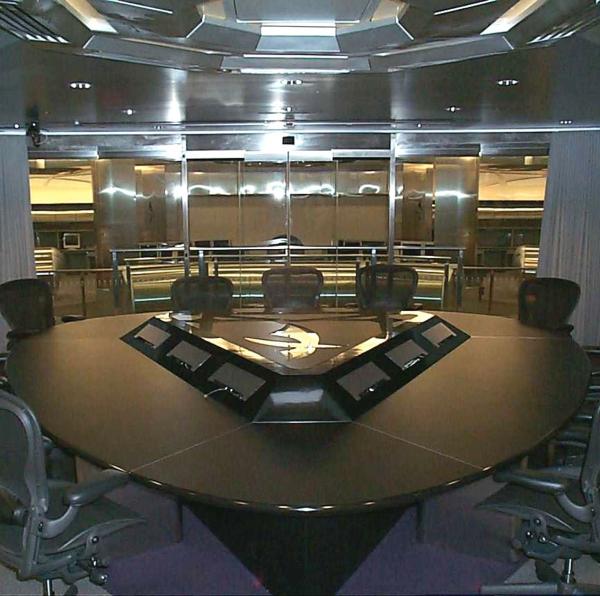 I think that is my favorite. That is awesome, I don't see anything wrong with having fun decorating an office. Unchecked power being used for decent decorating is the least of my worries!

I think that is my favorite. That is awesome, I don't see anything wrong with having fun decorating an office. Unchecked power being used for decent decorating is the least of my worries!

Note the klingon symbol in the middle of the table. Holy...S..it, you damn klingon, you killed our constitution!