Ghosts of the Rio Grande

posted on Sep, 14 2013 @ 06:46 PM
link
One of the things I love about ATS is the diverse information and articles found here, I found this piece whilst on a browse of newswires. Thought i would share it here. Hopefully I posted in the correct forum.

Every year hundreds of immigrants die along the U.S.-Mexico border. Too many are never identified.


Ghosts of the Rio Grande 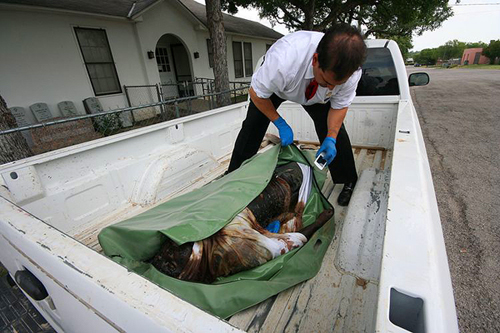 The path across the border is littered with bodies. Bodies old and bodies young. Bodies known and bodies unknown. Bodies hidden, bodies buried, bodies lost, and bodies found. The stories of the dead haunt the frontier towns from Nuevo Laredo to Nogales, and even deep within the interior of Mexico down to Honduras, someone always knows someone who has vanished—the desaparecidos—during their journey north.

Many of those missing end up in the South Texas soil. Out on the Glass Ranch, a man named Wayne Johnson stumbled upon a skull, some bones, and a pair of dentures scattered near a dry pond. During a bass fishing tournament at La Amistad Lake, anglers came upon a decomposing corpse near the water’s edge. Late one summer night, a train engineer must have blown his whistle, but it was too late to rouse a father and son slumbering on the tracks. For 2012, Brooks County, with a population of just 7,223, reported 129 deaths from immigrants trying to evade the Border Patrol checkpoint in Falfurrias, double the previous year. The county judge told the San Antonio Express-News the county had run out of space for John Does in its Sacred Heart Cemetery.