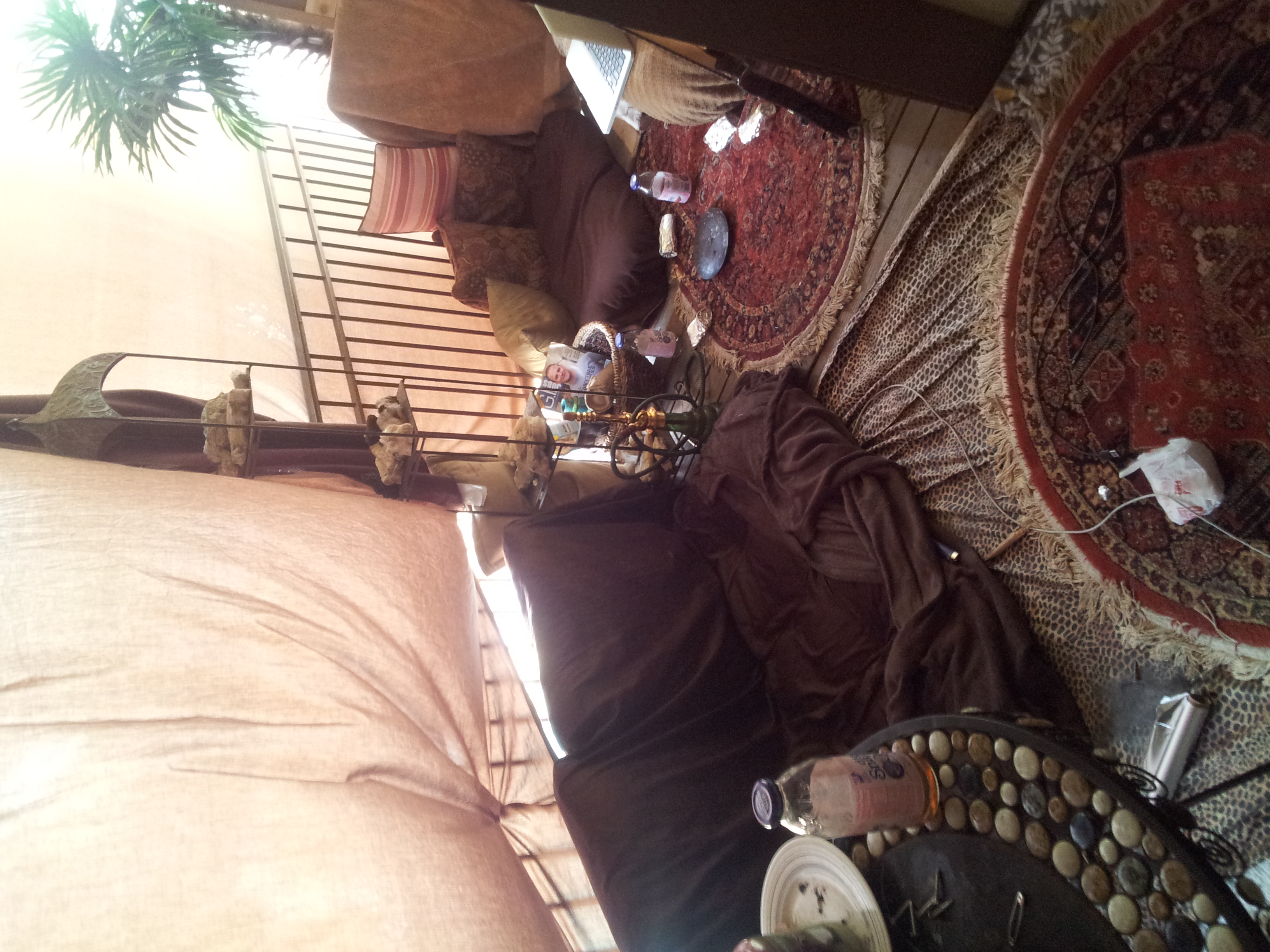 Also I hear its good to focus on breathing but I find it hard.. so im not sure if im doing it right so please give me tips.

Ill sit and unfocus and my breathing will become shallow and ill somewhat get "lost" idk feeling. But ill get numbness starting from feet and hands. And spread tell they both connect in my chest, then goes to my head. Now I xant feel my body. So my hands can feellike there above my head when there really in my lap etc. Well after a while of tthat ill fell heavy almost vibrating feelings on my skin and on my face it feels like almost static? I open my eyes because this frightend me. Got up and moved around. For a good while after had that vibrating feeling throughout my body and static feeling. No I dont think im special or any.. lame thing like thay. (As in self obsessed or something like that) but is this a medical problem in any way?
edit on 12-9-2013 by EmittsrifEhtrof because: (no reason given)


Gorgeous meditation area. Nice hookah and beautiful rock garden. I don't see a fountain but I hear one when I see your photo.

If meditation is relatively new to you, perhaps your body isn't comfortable with the position you are sitting in and it could be cutting off your blood flow. You may try a new sitting position or even lie on your back to meditate. Perhaps count your breaths and picture your feet alternately stepping onto beautiful, intricately carved path stones surrounded by moss, as you make your way closer and closer to an incense-laden temple in the distance.

I love your meditation area. What a lovely, serene haven.


What the other poster said about blood flow could be true. I sometimes have bad circulation so I usually have to lay down for better results.

But everything you described sounds pretty normal for meditation. I have the same problem with shallow breathing. You want to focus on your breath but try not to control it. I mean that's one way to do it. There are many more ways. One thing I used to do is sit there listening to my breath feeling it flow in and out, and wait. At some point I would hear buzzing in my head. Then I would focus on that and make it louder and higher pitched.

Oh and I like what (she?) said about the stepping stones and the temple. Very cool visual. It all depends on where you want to go. There are many doors into the middle.

posted on Sep, 12 2013 @ 03:50 PM
link
Very nice little Zen area you got there. This video is great for beginners it uses the focus on breathing method


Remember to ground yourself to this planet at the beginning of each meditation, simply say you are part of this Earth and imagine roots growing from your feet into the earth being part of the Earth. That way your mind is free to wander the cosmos with your body waiting for you to return.

Once you practice meditating and it will get easier you will be able to do it anywhere, plus its super fun!
Also look in to Chakras and healing your body will never be the same when you learn to use and open them.

Chakras are centers of energy, located on the midline of the body. There are seven of them, and they govern our psychological properties. The chakras located on the lower part of our body are our instinctual side, the highest ones our mental side.
www.eclecticenergies.com...

Most importantly have fun and don't be afraid of what you see it's just you out there.

Meditation is really much like exercising, but of the body, and mind/spirit. It all about being persistent really, and just takes time to get better at it, but most focus on you using your diaphragm . Breathing meditations are quite traditional, but there are other forms or techniques. Here a article to give you a general idea, although it doesn't go into a depth of info about it.

There are meditations techniques which differ from the traditional calmness, which focus on forceful breathing, such as the hindu "Kalabati" (breath of fire, or skull shiner), which requires you to breath in slowly and gently, and push out your stomach, but then you force the air out of lungs, and tuck in your stomach. There is a video on youtube which has a yogi demonstrating it.

I still practice the breath of fire from time to time, but I never really get pass 30 breaths in one meditation. Chakras can be simple, but also very complex, and can be also problematic to one health if they get obsessed about it . Also another form of meditation is just sitting, which was number 2 in the link I posted above, and its pretty difficult to do since it just sitting down as the general rule of thumb. Does not say anything about breathing or anything for that matter.

It personally my favorite form though, and took me a good long while to get proficient at it. Here my tip that when your doing it right, your breath becomes very short when inhaling and exhaling, but when thats happening, u feel like your getting more then an enough air in your lungs.

And I'm only going to say this once, don't bother with "Third Eye meditations", might get a few neural path ways crossed, and then your on own.

Really the trick with any form of meditation is learning how to relax one self, which is much harder then sounds.


That energy that you feel, that static that you feel, is the aliveness of your body. It can be scary for some people to realize that their body is alive. They believe they must "do" everything, so relaxing and realizing that the body is taking care of itself can be creepy.


That's where the other 90% of the brain goes. Motor functions, to automatic breathing in our sleep. Not really creepy, since every other complex life does the same thing.