How To Pronounce McDonald's Glyph (Countdown from 77) 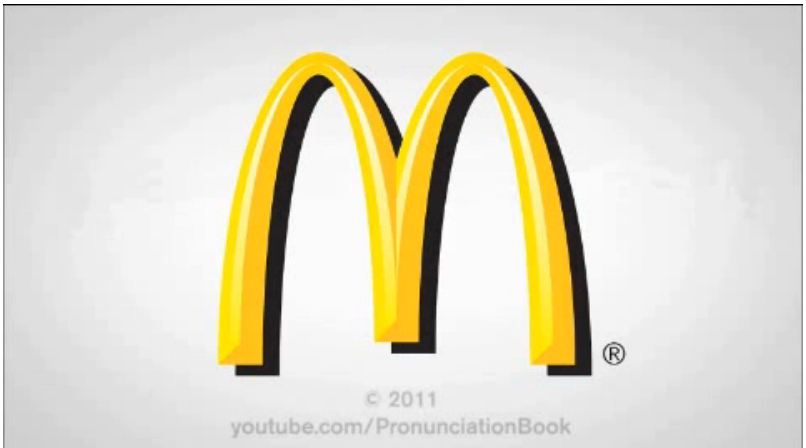 hello ATS! this thread is a branch from a previous thread called Countdown From 77. There has been some new developments which i have found both fascinating and disturbing, and deserving of your attention.

there are a number of new animated GIFs from the tumblr Let's Talk About Systems which have been verifiably linked to the 77 conspiracy. an example of one of these GIFs follows:

but what this thread is really, REALLY about is the following video which is dubiously linked to the PronunciationBook. in particular, i am fascinated by the idea that corporate symbols (or any symbol for that matter) can be interpreted lingustically, and subsequently translated into sounds of the english language.

while watching, you should note that the "word" is spoken three times.... corresponding (IMHO) to the three legs of the symbol. also, the "phasing" or blending of the sonic elements, from vowel to consonant, seems to be (IMHO) correlated to the overall progression of the color scheme. (not to mention that the whole thing sounds like it is being spoken by an "alien" tongue.)

How To Pronounce McDonald's Glyph


a WIKI about this video can be found HERE.

tell me what you think. i would LOVE to hear about the legitimacy of pronouncing glyphs into english.


Quoted from the wiki page about the golden arches:

The Golden Arches are the symbol of McDonald's, the global fast-food restaurant chain. Originally, real arches were part of the restaurant design. They were incorporated into the chain's logo in 1962, which resembled a stylized restaurant, and in the current Golden Arches logo, introduced 1968, resembling an "M" for "McDonald's".

However, if I had to play mind-games with people, I would suggest the Norse/Viking rune for Ehwaz as the most likely candidate.

posted on Sep, 16 2013 @ 08:40 AM
link
Isn't it just a stylized "M" for McDonalds and its golden arches? Their buildings in the 1950s had arches on each side wall, it an attempt to look more uniquely recogonizable, and the "M" logo was created in the early 1960s to reflect that then well-known building look.

What I'm asking is this: Why would there be any "pronunciation" of that logo at all, besides possibly "Emm"? Where did this alleged pronunciation come from?

It's videos such as this that make me thing the "Pronunciation Book" is just someones idea of an art project and nothing else. I feel the same for the countdown from 77. That could either an art piece or viral marketing.