What do you guys make of this video and the assertion that the plane's wing should not have disappeared behind that building.

This old silly video is a classic Ludicrous Online Lie regarding 9/11 and "no planes." Several other sources have confirmed (via Google earth satellite photos) that the building is in the foreground.
edit on 3-10-2013 by SkepticOverlord because: (no reason given)


Sorry I can't really watch videos at the moment. Can you give us a little synopsis of what it shows? Or you think it shows? Thanks

And the way the wings cut through the building like it was made of cardboard.

Can't wait to read the responses on this one.


That wing does indeed appear to pass behind a building in the background.
Does not look right at all.
Good catch.


Wings is clearly behind the building
The building is between the filmer and the plane, which is obvius to see, unless you are blind.

If the plane(wings) didn't make the cut, what did?


The whole video clip looks fake to me from the beginning, the plane just seems CGI to me... And the wing is definitely behind the building in the clip... Good catch

Saving my spot for later. Looking forward to the responses you'll get

Sure, its a video of flight 175 crashing into the WTC.

From the angle of the video, it would appear that the plane's wing disappears behind a building as it approaches the WTC.

The video's author is claiming that this is inconsistent because this other building is behind the WTCs, not in front.

Clearly the other building is much shorter and based on the angle, it could just be the approach of the plane which produces this effect.

The author states that this proves the video to be a fake...

After all, it is 9/11. We should be aware that disinfo agents will be out in force.

The wings are clearly behind that building which as the narrator states is clearly an impossibility. 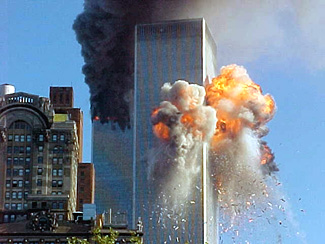 this picture quite clearly shows the same building and its quite obliviously in front of WTC-2 and not behind like the video claims its to be.


And that kind of explains that then.

OP this is the second thread on 9/11 you have posted to day and its the second i have had to point out as being a hoax.

posted on Sep, 11 2013 @ 11:25 AM
link
Well, firstly, I'm not sold on the idea that an airplane wing flying at full speed could not penetrate the building as it did. However, the wing disappearing behind that building is very odd. That only begs the question, in my mind, of the authenticity of this video. Is it the original? Or has someone edited it to further their own conclusions?

In order for this to have any credibility, the person who filmed it should be contacted for the original video. Then, and only then, can this be taken even remotely seriously.

posted on Sep, 11 2013 @ 11:31 AM
link
First of all, anyone who claims that this plane (whether it was Flight 175 is another matter) could not penetrate a hollow box like the South Tower is not worth taking seriously. Frank A. DeMartini, Manager, WTC Construction and Project Management, explains how the Twin Towers were "designed" to withstand the impact of a "fully-loaded Boeing 707." He also goes on to say that each of the Twin Towers would "probably sustain multiple impacts of jetliners because this structure is like the mosquito netting on your screen door: this intense grid; and, the jet plane is just a pencil puncturing this screen netting; it really does nothing to the screen netting."


Admittedly, the 767 was slightly lighter than the 707. But it was likely travelling faster than for what the designers of the towers allowed. The commentator therefore is plain wrong in his assessment that the plane could not have entered the South Tower. It was designed to allow just this!

Secondly, the building is nearer to the cameraman than the plane as it approached the South Tower, and so it is perfectly natural that part of it should obstruct sight of a section of the wing of the plane when filmed from the ground.

Why is it impossible when the building is infront of WTC and the plane is passing behind the building before hitting the tower.

That wouldn't make a good conspiracy now would it ?

posted on Sep, 11 2013 @ 11:36 AM
link
though i agree this particular vid looks strange......of the hundreds of vids I've seen, i do not remember this one- some similar, but not this exact one.
Regardless,
I saw the 2nd plane hit, LIVE in real-time, and all of the horror that followed.
Also, there were THOUSANDS of people in the vicinity who witnessed the planes as they flew into those towers.
THATS THE ONE SURE FACT OF THE WHOLE DAMN EVENT!
So stop with this crazy dis info- its ruining the chance at finding answers to the legitimate questions.

Not sure what youre talking about.

I didnt make any assertions that the author of the video was stating a fact, simply posting for people's consideration...

The idea that any building is in front or behind any other building is completely relative. It depends on the orientation of the viewer.

Looking at the buildings from say the north east (for example), would place the brown building in front of the WTCs. Looking at them from the opposite direction would reverse their positions...

I didnt make any assertions that the author of the video was stating a fact, simply posting for people's consideration..

the point remains, in the video the guy says that building is behind the tower, turns out its in front of it

so what do I make of it

I think its a blatant lie that the guy in the video is making, thats it

No the position of a building is not "relative" it is where it is. This building is most definitely in front of WTC-2 not behind it. It does not jump form in front of the building to behind it "relative" to anything
edit on 11-9-2013 by OtherSideOfTheCoin because: (no reason given)

I am focusing on the video, and also some of your comments regarding the video

its all on topic and its nothing personal

it just so happens that the video you have posted in your OP is rubbish as it relies on that building being behind the south tower, when its actually in front of it.

essentially that picture "debunks" the video