posted on Sep, 11 2013 @ 01:30 AM
link
All I can say is "WOW"!!
Watching that video of all the bikers and the encouragement they got from those they passed with waves, honks and blasts of sirens, was so overwhelming for me. God Bless all of you Bikers!
~Linda


You are aware that Muslims were also working in the WTC and died on 9/11, right? 9/11 was not an attack on just white or black people. It was an attack on Americans of all colors, ethnic groups, and religions. It was ruthless and horrific and impacted all of us regardless of those seen and unseen differences. I absolutely support the Million American March tomorrow because, at this point, if it were terrorists at work on 9/11, they won because we've allowed our civil liberties and the fabric of our constitution to be ripped to shreds out of fear of the boogey man. Personally, I'd much rather see this country get united on this particular subject tomorrow and stand up for those things we treasured so much once upon a time than allow the media to continue divide and conquer.

posted on Sep, 11 2013 @ 02:28 AM
link
So, they're representing a false flag and xenophobia, and we're supposed to applaud them? I'll leave that to the filthy sheep that are running this nation into the ground.

America. Glad to see you back.

..And no- this is not propaganda. (Just in case you are wondering). Doesnt look to be anyways. You got pissed off people whom you made put their welding torches and pencils down for respect and honor for what happened to their own people that day across the nation. Thats what countrymen do.

I dont see anyone saying anything against that. This was good to see.

posted on Sep, 11 2013 @ 02:57 AM
link
Soo all these riders hate the Muslims because the US government did a false flag attack and the used it as an excuse to kill a load of muslims?!

Im not understanding any of the logic of this.

But at the same time what a stupid day for the Muslims to be holding an event.

posted on Sep, 11 2013 @ 04:17 AM
link
I hadn't thought one way or another about this, but some comments on another site got me thinking. Here's what the other site comment said

there´s something they also haven´t considered.

houston, i think we have a logistical problem!

and it gets better, as 500,000 bikes in staggered formation would come out to about 1532 miles in length.

there will be a turnout (mainly because bikers will use any excuse to ride together in a group and go for a beer after), but nothing as big as the dreamers want, even though the dog-whistle word `muslim´ has been used.


He leaves out discussion of the support vehicles required to keep that many Harley's on the road.

As that guy says, I'm sure the bikers will get a better draw than the "birther's" impeach Obama Million Man March did (8 people, maximum, I understand, and I don't think they had enough port-a-potties for that many), but going for a 2 million bikes is just a bit over the top, don't you think?

Isn't hyperbole getting a little tiring these days?
edit on 11/9/2013 by rnaa because: (no reason given)


Al that extra lovely oil being burn, its good for business! 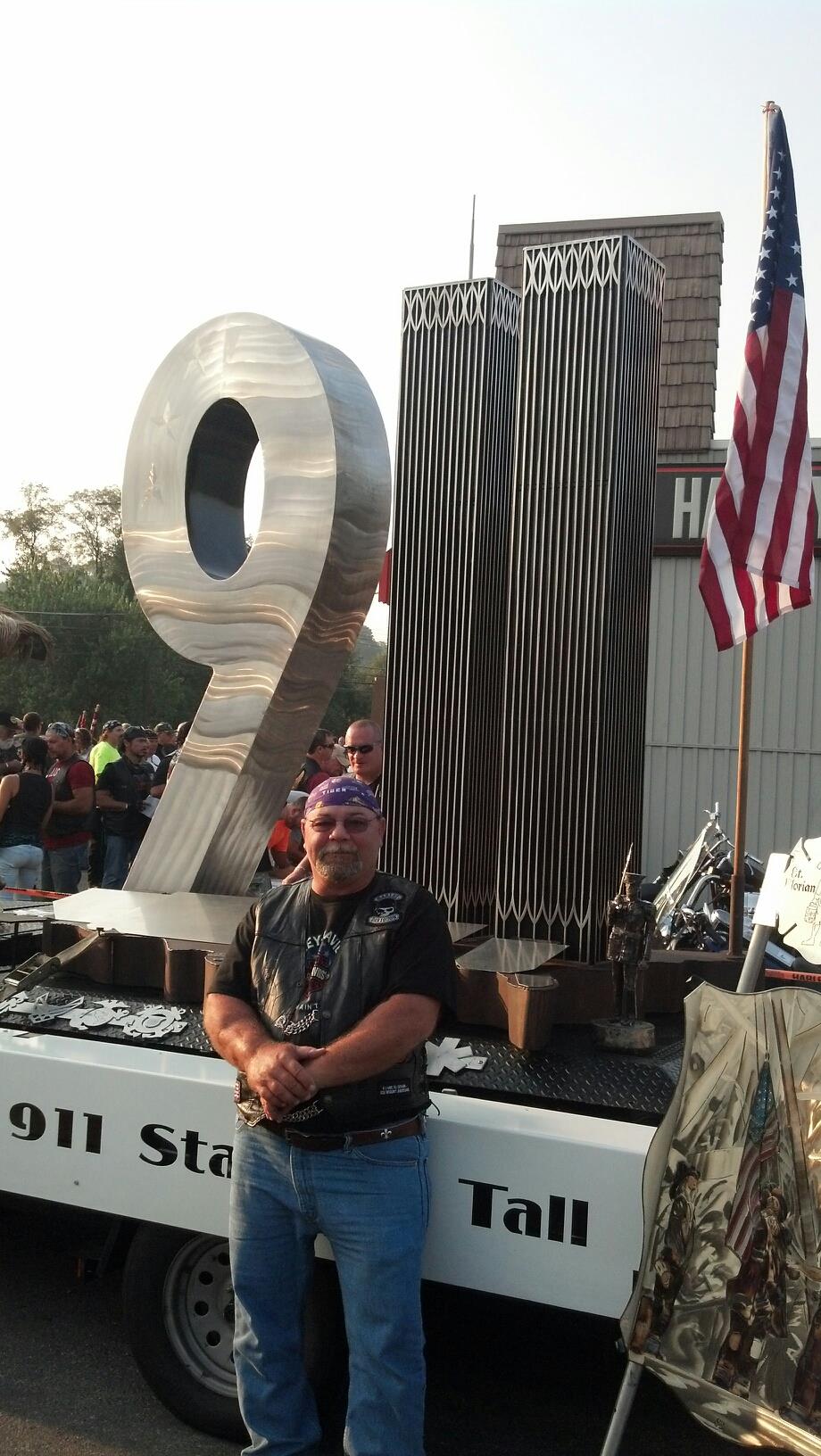 From my Brother this morning:

It is a very patriotic time here now I've had to choke back tears a time or two, lump in my throat as I listen to the speakers speak and spur us on. The crowd erupts in cheers and applause. Chants of USA USA ROLLING. Bikes are steady rolling in by the groups........unstopping. Sounds like thunder. (big lump in throat again) I got to go cheer......later

Ya'll be sure to remember them in your prayers today.

posted on Sep, 11 2013 @ 11:32 AM
link
I looked for the event on LiveStream and UStream and they are not showing it. It seems as if the majority of DC's traffic cameras are belly up as well.


Yea, they're not showing too much of it. You think they would be all over it showing as much as they could and interviewing people and all. I don't understand why there's no coverage. All these people come together in the Capitol to show the American Spirit is still alive and the major news channels ignore them. But, this is from their facebook page.


DC POLICE TOLD OUR BROOKE THAT THEY ESTIMATE 880,000 BIKES ARE IN DC TODAY! CLAP CLAP CLAP CLAP!!!!! THANK YOU TO THE AMERICAN PATRIOT BIKERS!!!

According to the NHTSA there are about 7 million registered bikes in the USA. That includes ALL bikes - Kawasaki 125s and Vespas and Harleys and everything. 880,000 Harleys would just about be every example in the country, don't you think?

Maybe there's big Kawasakis in there too, and Yamahas, and maybe a few Nortons and even an Indian or two. But do you really think that 1 out of every 10 bikes in America is partying in D.C.? And for-gedda-bout 2 million. That's just silly.

rnaa
I understand there were a few tens of thousands, not 880,000. That's still lots of bikes, and good on 'em. Caused a bit of grid lock and made a lot of noise, but that is what demonstrations do. No real problems as far as I can make out.

According to the NHTSA there are about 7 million registered bikes in the USA. That includes ALL bikes - Kawasaki 125s and Vespas and Harleys and everything. 880,000 Harleys would just about be every example in the country, don't you think?

Maybe there's big Kawasakis in there too, and Yamahas, and maybe a few Nortons and even an Indian or two. But do you really think that 1 out of every 10 bikes in America is partying in D.C.? And for-gedda-bout 2 million. That's just silly.

Thanks for your input but what exactly are you trying to get at? I assume you were there to count each bike, while also being in Australia, since you know a round-about number? You state "Caused a bit of grid lock and made a lot of noise, but that is what demonstrations do." I really don't think you understand the magnitude of this particular demonstration. From the tone of your message it almost sounds as if you're being facetious about a demonstration that meant a lot to a lot of people in the U.S. BTW, this is not "bull crap hyperbole" my friend.

posted on Sep, 11 2013 @ 11:06 PM
link
reply to post by OptimusCrime
God bless these biking patriots - you can bet if there were problems - it would have been all over the MSM.

These are the americans that the gov't is afraid of - law abiding, hard working, probably all comfortable with weaponry (as many are vets).

I also want to say something about the majority of immigrant muslims that we all know - many of them are my co-workers (work at the state mental institution in WI) - These people are good, law abiding, hard working, glad to be in America, people.

I'd say the only terrorist muslims are in this administration. Maybe Chicago and Detroit, also.


You clearly didn't understand my point.

Thanks for your input but what exactly are you trying to get at?

That I'm tired of hearing about "Million x Marches" where 5 people show up. The "organizers" have no perception of reality. There was supposedly a "Million Man March" to impeach Obama the other day. Some people called it the "Walk like an Egyptian" march cause they thought they could emulate the Egyption demonstrations that overturn governments. 8 people showed up, and the 'organizer' was not one of them, even though he had been soliciting funds to pay for the 'march' for months. Can you spell "Confidence Scam"?

I assume you were there to count each bike, while also being in Australia, since you know a round-about number?

No but relatives and other associates are. There was a sh*t load of bikes. Lots and lots of them. But no where near 2 million bikes or 1 million or even 100 thousand bikes.

You state "Caused a bit of grid lock and made a lot of noise, but that is what demonstrations do." I really don't think you understand the magnitude of this particular demonstration.

I think I do understand the magnitude of this particular demonstration, both in numbers and meaning. The bikers ride was a successful and meaningful ride.

From the tone of your message it almost sounds as if you're being facetious about a demonstration that meant a lot to a lot of people in the U.S.

I am not being facetious in any way shape or form.

It started out as a counter to the supposed "Million Muslim March" (which wasn't ever that either) and improved to a 9/11 memorial. I am fine with that, I respect it, and if I was still in the U.S. I might very well have participated. Did you?

BTW, this is not "bull crap hyperbole" my friend.

I am not calling the INTENTIONS of the bikers hyperbole, I am calling the stupidly inflated participation NUMBERS hyperbole.

What is hyperbole is the idea of a "Million Muslim March" (which turned out to be really a 911 'Truthers' marchm that may or may not have had anything what-so-ever with the Muslim community) that ended up drawing maybe 20 people. Apparently they thought they might get a million people to come protest about the million Muslims all gathered together but it fizzled out when they were forced to change the name? I dunno, but it didn't work anyway.

What is hyperbole is people calling every attempted gathering around a soapbox in Washington D.C. a "Million (whatever) March" when in reality you ain't gonna get 50 people. If you want a million people to show up you had better well PLAN for a million people and they need lots of port-a-potties, tents, medical facilities, food..., etc. You don't just show up with a bull horn and start speechifying to a million people.

That is what I am objecting to. You can demonstrate for or against topic you want, just don't bullsh*t about drawing a million people when you darn well know you aren't going to get 50.

posted on Sep, 12 2013 @ 08:19 PM
link
Hi everyone, i seen a post on their facebag page, and multiple commenters noted that the traffic cams in the DC area didnt show ANY bikes in them. AND one cam showed SNOW on the ground!
They said that it was obviously looping video from another time. They also mentioned the monument had no scaffolding on it in the cam, where as apparently right now the monument is being worked on.
I have a screen shot of the picture and the posting on their facebag page, but once again i have no idea how to insert it here.. especially with this new format....

That would make my life.