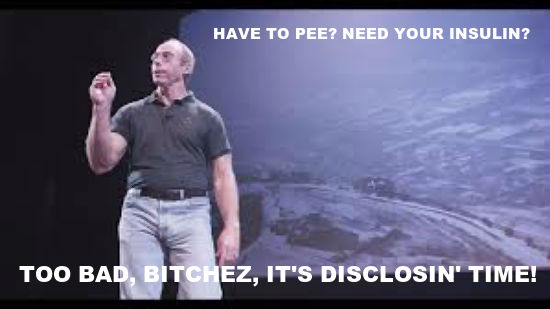 According to William Henry, he rolled up on this year's "Contact in the Desert" conference with a small phalanx of bodyguards.

During his presentation, his thugs barred the doors, refusing to allow anyone to enter or leave. Henry reports that when an ill woman attempted to GTFO, she was roughed up.

Ironically, a speech given on the subject of abductees was delivered to a group of folks Greer had effectively just abducted.


Dr. Greer claimed that the US government has offered him two billion dollars to stop his disclosure efforts and his public speaking. 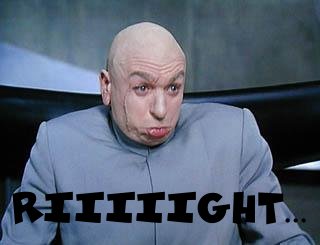 Trying to comprehend why some people still follow that snake oil salesman is beyong me, so perhaps they deserve to be held hostage until their last coin falls off of their pockets and rebounds into Greer's.


and we urge all UFO conference attendees to demand that they not be imprisoned during any performance for any reason.

Good advice no matter where you go. "I demand that you do not imprison me!"
Funny stuff.

posted on Sep, 10 2013 @ 04:45 PM
link
So that's one more person we can add to the list of people that make the subject of ufology look like a joke written by mentalists. Awesome.

posted on Jan, 26 2014 @ 04:16 PM
link
It doesn't strike anybody as odd that only one man is claiming this happened out of a room full of people, but there is also only one original source of information on the net... from somebody who "spoke to William Henry" and "didn't want to be named"...

That's hardly reliable to be honest.

So how credible is William Henry? Serious question!
I haven't watched his stuff as I'm not really drawn to physical Stargates and see it as nothing more than fantasy.
Apparently a lot of his work is based in Sitchens work that has come under a lot of scrutiny.
Is there any subject he is credible in to be believed?

Steven Greer hasn't bothered denying this, and to be honest I don't blame him.
Think what you like about Greer, but he is not an idiot. Even his biggest sceptics will not call him stupid.

So why the hell would he break the law in a conference where he is trying to spread his opinions, to people he needs faith from, and risk being brought to court by every single person in the room he supposedly "abducted".

Slander is horrible, and if you're not man enough to say who you are when accusing somebody of such a crime, your testimony is a pile of horse Schmidt!!!

posted on Jan, 26 2014 @ 08:30 PM
link
Okay, why wasnt he bought up on kidnapping charges? Holding people against their will and not allowing them to leave is kidnapping, a federal offense.
Trust me, if I had been in attendance, I would have been on the phone to 911

posted on Feb, 14 2014 @ 01:48 AM
link
I don't know, after reading the details a bit more and another persons account, it doesn't seem so crazy. At least not "imprisonment of the audience" as like was in the headlines. Just seemed like some stupid idiots minding the door who were trying to keep the noise down by only letting people in or out in 10 minute intervals during the talk. They might of or not locked the doors but they were definitely telling people the had to wait for up to 10 minutes to leave or enter. Oh, and it was during Wilcock's talk supposedly.

Sorry, I always try and question posts and the news. 90% of the time I find the truth is someplace else.

A "Bizarre Horror Show" at a UFO Conference


Apparently the security was only allowing people in at 10 minute intervals. When I was inside, I just so happen to be walking out toward the main entrance as they were opening the door for the others to come in. So you could say that had I not been coincidentally at the right place at the right time, they would have refused me leaving for up to 10 minutes


edit on 14-2-2014 by bimyou because: Added appropriate attribution


Exactly my thoughts. Question everything people....

posted on May, 4 2014 @ 08:33 AM
link
This cannot be true. The explanation above about the doormen trying to keep the noise level down sounds more credible to me.

posted on May, 4 2014 @ 08:44 AM
link
a reply to: CharlieSpeirs
Great post. I never got the seething sheer hatred some have for Greer. I'm no fan of his, and if he wants to, as well, charge $ for whatever, and some follower/fans are game, people need to as well, MYOFB. He's not presently so active in Ufoology anyway.

this is absolutely true, he does it everywhere he holds a conference.
here is one of his old sign up letters from 2004.


Everyone will be required to sign a Non-Disclosure Agreement.
Anyone who has not attended a CSETI training will be required to fill out an application.
Everyone attending must stay the whole time, except if an emergency comes up at the last minute.
For more information or to apply, please contact Debbie Foch, the CSETI Coordinator, via
Email (preferred): coordinator@cseti.org
Phone: 1-888-ET-CSETI (1-301-249-3915) or Fax: 1-877-92-CSETI (1-501-325-8328). The best time to call is between 1:30 and 4:30 pm Eastern time. Please leave a voice mail message if no one answers
Payment Methods Credit Cards (Visa or Master Card) or Checks made payable to The Disclosure Project.
Mail Checks to:
CSETI/Disclosure
Project PO Box 4556
Largo, MD 20775 USA
GREER SELLS YOU 'THE TRUTH' - FOR ONLY A '$600 DONATION'


he's been doing it this way for a long time, did you also see the non disclosure agreement, and apply to join cseti.
one of the original UFO FLIM FLAM MEN.

Well, you might want to consider that that 2 billion was not for just being quiet but to alter his "mission" to become more of a jerk. After all, he didn't have far to travel to assume that role. Maybe not. Then again, he can look at David Incke and feel that he has a lot of room to expand his performance piece and still make money.

I'm greatly disappointed in that the Disclosure Project seems as a good way to attack the establishment. Yet, he has a way of always self-sabotaging his own efforts. Maybe most of these guys are bought and paid for by the secret keepers. Certainly, the major effect they have on the general mass of people is negative and helps keep UFOs in the fringe is has been the chief plan of operation for a long time because it effectively works.

posted on May, 4 2014 @ 09:09 AM
link
Do you think that if he was offered 2 billion he would still be giving those #ty conferences showing pictures of moths, that clown would be on a beach somewhere, how do people keep lapping up the excrement that this fella keeps spewing out of his noise hole?

Paediatric Surgeons are not exactly malicious people if we judge him based on credentials!

Maybe his sources have let him down here and there, but overall how many people here watched the Disclosure Project and were not impressed by the intent, message & all round mission!

I was highly impressed, & I'm sure even his critics would prefer he went back to his roots there!