posted on Sep, 10 2013 @ 07:45 AM
link
Looks like the big biotech companies are still at it. This time in the form of Trans Pacific Partnership (TPP).
Although the exact contents is secret it is believed to require..


The chief agricultural negotiator for the US is the former Monsanto lobbyist, Islam Siddique. If ratified the TPP would impose punishing regulations that give multinational corporations unprecedented right to demand taxpayer compensation for policies that corporations deem a barrier to their profits.

A purely executive creation of the Office of the United States Trade Representative -- i.e. created outside of law with zero public accountability -- the TPP involves White House loyalists running around the world, strong-arming over a dozen nations into signing on to a corporate domination agreement knowingly misnamed "free trade." 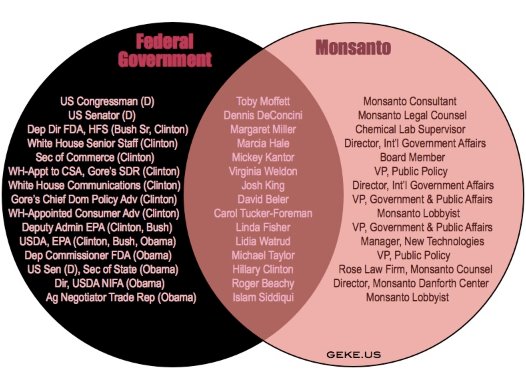 
If ratified the TPP would impose punishing regulations that give multinational corporations unprecedented right to demand taxpayer compensation for policies that corporations deem a barrier to their profits.

What is there to say about this?

I thought business was rewarded with loyal customer from a good product or service. Now they can bail themselves out of any losses using tax payers money.

There is just so much wrong with this how it came even close to being accepted, is honestly so stupid there is no words to describe the sheer gall and epic injustice of this.


Hello Wrabbit hope all is well in your warren..
Thank you for your enlightening little graphic insert. Definitely looks like a conflict on interests. This kind of stuff really should be illegal. We should see a clear disparity between corporations and government..


I agree entirely In fact, I believe we could do something about that in a legal way! I've been thinking about this for awhile now and Monsanto in particular. Evil trolls that they are.

I say we get a new law passed that relates to people employed, appointed to to elected to positions within Federal Government service in any form. If you've been in any of the above positions that carry any level of pension or benefits after separation? You cannot take private sector employment for any company that has business or regulation interests with the Government, in any way.

That should leave the office clerks or gov truck drivers free to pursue a job at another company but cover everyone with enough power and pull to corrupt the system by changing sides. Think it'd work? (I didn't ask if we'd ever actually see it... lol)

posted on Sep, 10 2013 @ 09:35 AM
link
I can't understand why countries are allowing corporations to not be accountable to their governments. If their product is not distributed in their country, that is one thing but if the product is not allowed in a country for a reasonable concern, the country should never be able to ban it in the best interest of their citizens. This goes for pharmaceuticals also. There are natural ways to control most diseases. There is no evidence to show that GM food will be safe in the long term, increasing the DNA presence of microbes can have unknown long term effects. Twenty years of use in the diet, while cancer numbers and allergies are increasing. is not a good indicator of their safety. There is no direct proof that GM foods are doing this though....it is just a coincidence that one in three are now getting cancer. It is not GMO by itself, it is too much change too quick. GMO is a major contributor but not the only cause of these increases. The thing is, by stopping GMO, you slow the progression. But this is counterproductive I guess, less people needing medicines and doctors and healthcare is a threat to our economy. Those opposing the use of GMO are a threat to society I guess, we need to reduce the population by half in the world and make sure nobody enjoys retirement.

posted on Sep, 10 2013 @ 09:49 AM
link
Somewhere, out there, on here...there is someone who works for MOBAY...any takers?
I know you're lurking...come on out with it.
I DO know someone....and we gots us a plant right here in my podunk redneck community.
Just so happens that they are 2nd in the area as highest paid employers...only second because of Boeing...

That $1500 mortgage, $600 truck payment are mighty important. So what if in the last 9 months 3 people have died from cancer in their plant. It's just par for the course.

posted on Sep, 10 2013 @ 09:50 AM
link
If this stupidity carries on, will those GM companies get tax payers money if a year was a bit cloudier than normal?

"were expecting 1% more sunshine this year, our crop was 1% worse than projected so we will just go ahead and steal oops i mean take the difference from your tax pool"

Military aka the government run things they way they want, do what they like regardless of what the country's people wants
Large companies are untouchable and pretty much do what they want too and if any one smaller gets in the way they buy them, ban them or boycott them. (while paying the least tax of anyone or any thing in the states).


So the large company's produce and employ the people while paying them little, the military stir's up wars to throw the population at, all while feeding them all utter crap, making them use oil they dont need and keeping them unhealthy, poor, needy and as uninformed as possible. Would you teach YOUR cattle how to open the gate?


Hmmm. Joint venture with Bayer, they make polyurethanes. Just happens that if polyurethanes in the house are exposed to a small fire, the chemical released can kill people all over the house in a short time. Varnish never did that to people. Sounds like something Monsanto would have it's mitts into.
edit on 10-9-2013 by rickymouse because: (no reason given)

wrabbit2000
It's a wonder...How do such things become possible?

wrabbit there is one name not on that list that i feel should be, well maybe two.

the first is Clarence Thomas, he was a lawyer for monsanto in the seventies.
although when he was there, monsanto didn't have a seed business, it makes one wonder about his loyalties, especially seeing how he is the one who wrote the majority opinion in the case that paved the way for seed patent laws, and then again in a supreme court case where temporary ban on a breed of genetically-modified alfalfa developed by monsanto, was challenged by monsanto. here a link that mentions both.

Justice with Monsanto ties should recuse himself, environmentalists say - See more at: iowaindependent.com...


Between serving for Gerald Ford and George W. Bush, Former Secretary of Defense Donald Rumsfeld was chairman and chief executive officer of G. D. Searle & Company, a pharmaceutical company which produced aspartame apparently while working on an ulcer drug. Monsanto bought the company in 1985, and re-branded aspartame as NutraSweet. Rumsfeld's stock and options in Searle were $12 million USD at the time of the transaction

it's said that rumsfled used his influence in government to get aspartame pushed through with out proper testing and ignoreing things that were already know about it.
edit on 10-9-2013 by hounddoghowlie because: (no reason given)


That graphic is pretty old and came from the site shown in the lower right. It's all over the net.

Perhaps it's time ATS folks got together to make a new one? It sounds like there are some omissions that need to be there.