Turkish soldiers patrol on the Turkish-Syrian border in the town of Ceylanpinar in Sanliurfa province.(Reuters / Stringer)

in a move to intensify its defense near the Syrian border, Turkey has deployed additional troops and more weapons to the country’s southeast. Earlier this week, Turkey sent reinforcement to the south amid Washington’s calls for a military strike on Syria.

The Turkish military dispatched additional units to Suruc, located in the southern province of Sanlıurfa, on Sunday, Today's Zaman reported. According to the report, semi-trailer trucks loaded with armored vehicles and tanks were sent midday from a command post in the southeastern city of Gaziantep.

Local newspaper Hurriyet also reported on Sunday that Turkish fighter jets conducted a patrol flight over the Syrian border due to “increased activity” in the area.

Automated firing units using Stinger missiles for very short range air defenses have been set up on top of a high hill on the Syrian border town of Yayladagi in Hatay province, Reuters reported, citing a witness who said that the defense system's radar was active.

Over the past week, Turkey also moved convoys of military vehicles carrying equipment and personnel between its bases near the southeastern border.

Turkish armed forces have also begun to establish a new base on the top of Kel Mountain, adjacent to the Syrian coastal city of Latakia, according to Hurriyet.

Military equipment, which was carried by trucks for two days from the Yayladağı district to the southern Hatay province, is being assembled on top of the mountain.

It remains unclear what prompted the decision to send reinforcements to the border, as neither the Turkish military nor the Ministry of Defense were available to provide comment to Reuters.

Local media speculated that the move could be related to a Tuesday accident which occurred when a package of live ammunition exploded while being smuggled into Turkey. Six people were killed at the border.

It has been also suggested by the media that the additional troops will be the first to respond to a possible strike by Syria.

But in his recent statement, Prime Minister Tayyip Erdogan reiterated that Turkey - which has been openly supporting the rebel opposition - was ready to take part in any international coalition against Syria.

"Whether it would be as an opposing force or supplying forces to provide logistical support, all this would be determined by circumstances," Erdogan said on Sunday.

Turkey has been bolstering security along the 900km (560 mile) border with Syria over the past year.

Meanwhile, US Congress is set to debate whether to give a green light for military intervention after President Barack Obama proposed limited strikes in response to what Washington insists was the use of chemical weapons by the Assad regime against Syrian civilians.

posted on Sep, 8 2013 @ 04:17 PM
link
You need to use the [.ex.] tags before and after the quoted material and then include a link to your source. Do a search for "BB Code on ATS" using the ATS search function. Otherwise it's hard to see where your comment ends and the quoted material begins. Plus, you'll be accused of plagiarism.

Relating to the story itself, I'm not surprised that Turkey are stepping up along the border. Syria is about to be attacked by Western forces, so they can expect at minimal a flood of refugees.

ETA - having now read the material in your post (not being distracted by the formatting issue), I think the Turks are lying about their intentions towards Syria. I think they anticipate an escalation of the crisis when Western powers attack, and they will have wanted to bolster their defensive/offensive capabilities near the border in preparation for that escalation. Their involvement would probably be limited to defensive, though they may surprise us with an offensive if Syrian fightback commands too much effort from the Western powers.


Will they take in the refugee's FIFO?

If we are going to strike despite no public support, I worry for the civilians the most. Will Turkey take in the refugees, or turn them away?

Turkish soldiers patrol on the Turkish-Syrian border in the town of Ceylanpinar in Sanliurfa province.(Reuters / Stringer)


Well from the looks of that picture, 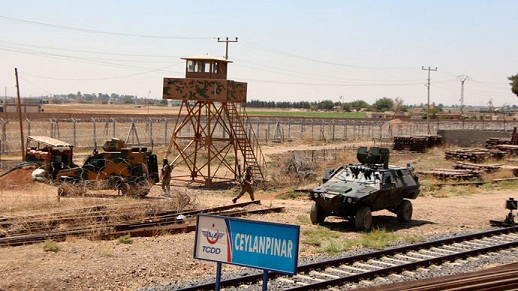 Thanks I always wondered how to do it.