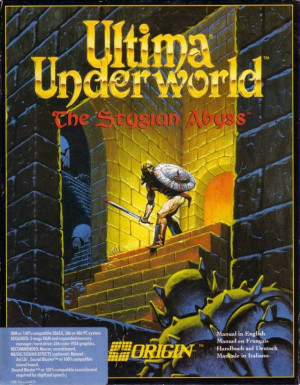 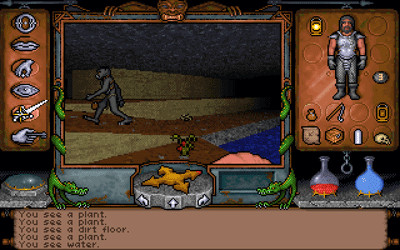 I first played this game when it came out and I was still in the US Navy, stationed in Charleston, SC. I had a x386 computer, 8 MB of RAM, with a SVGA video card, and the CPU clocked at 33 Mhz! Whew! Heady times back then!

Anyways, both me and my first wife really enjoyed playing this game, so much for her that she actually got me to bring home a blank log book we used in the military back then, and she kept very detailed notes of the game and each level.

Of course today with my quad core CPU, 16 Gb of RAM, two 500 Gb hard drives I play much more advanced RPGs like Skyrim, Fallout 3, etc. But there is something to be said for the games of old.

Watching an old episode of The Big Bang Theory, my step son Josh asked me what "Zork" was (I had a immediate flash back to being a teenager in the early 1980's and playing Zork on my Commadore 64...), so I explained what the game was. He asked if he could play it, so I got the game, and using Dosbox, got it running on his computer, watching as he played it and was actually having fun (this from a kid that plays Team Fortress, Bioshock, etc).

Doing that for him reminded me of my older games, like Ultima Underworld, and Elite Plus. So I got Ultima Underworld out (kept these games by transfering them to CDs when I first got my first CD burner, and then copied them yet again to DVDs and keep them in storage), and sure enough, using Dosbox, got UW to run just fine on my very modern gaming machine.

My wife Tracey (not the same as my first wife) watched me playing and was instantly hooked, so I had to put it on her machine too.

Having fun playing....but now we're stuck. We're on the first level of the abyss, and have explored everywhere, except we can not get into the Shrine room!

It's a massive door, so it can't be broken down. The lock pick does not seem to work on it. And none of the keys seem to work on it.
I've cruised the net looking for information on it, but I can not find anything about the door, other than it leads the the Shrine Room.

So, anyone out there play this game and remember how to heck to get into the Shrine Room on level 1? It's annoying as heck to get to as you have to do a bunch of jumps to get there. Any help would be wonderful.

I'm going to play Elite Plus again, had a BLAST with that game back in the day.....but I need to get a game controller to fly the ship.....keyboard and mouse just doesn't cut it with that game.


This was a great game and I spent a lot of time in the abyss. Sorry though, can't help you with the door. I was always getting killed on the 8th (?) level going down that flight of stone stairs. Good luck though.


UW when it came out put a strain on computers back then. I remember that old 80386 PC I had could barely handle the game at all. Did much better when I was able to upgrade to a 486.

And I think I may have found the answer to my question about the Shrine Door. Apparently there is a button somewhere that I have over looked!

There is a button on a ledge in that area. You click it and the door opens up!


Heh I was playing that last year on DOSBox.

Along with Ultima Underworld 2 (I prefer that to number 1), its funny but I think I can remember that door, is the room with the shrine door in it the one with a big central pillar a square moat around it and some off the side tunnels? (I think one of the tunnels has a great pair of boots in it along with a lever for the door?)

edit:- opps missed your bottom post, seems you found it (and my memory of it might have been right for once!)

Once he's played UUW get him either number 2 or something like Eye of the Beholder 1 or 2 (2's better but its difficulty ramps up majorly in the towers section, although if he can complete UUW1 shouldn't be a problem with him). There all abandonware so its not to hard to get a hold of them. (Avoid Eye of the Beholder 3, its terrible)... maybe even try and find him Lands of Lore which is pretty much the pinical of that style of game from back then.

Oh and if he appears to show a real interest in these old games take a look at Legend of Grimrock. Its an indie game that mimics the old tile based dungeon explorers perfectly but with modern 3d graphics... and its only 15$, which is pretty damn good.

Their working on a sequel, having played and completed Grimrock recently i can tell you its damn fun, challenging and a real nostalgia trip.

I gave up on UUW1 personally, I think I was down to the level with the Fire elementals, which is sort of where I gave up the last time I played it decades ago... never did face off with the Gazers down there, there lair will continue to remain a mystery for me... sigh.