Two videos of the same Object in Canada, Vancouver

Uh, did I say it was the Conservatory? No. I was simply responding to your statement that the Conservatory "cannot be seen from Nat Bailey Stadium" because its on the "other side of the hill" and that you "know this area like the back of your hand". You obviously made a mistake. The Conservatory is on the top of the hill. I thought the facts should be corrected.

Or is the unofficial motto on this forum now "just ignore the facts"?

In any case, it doesn't seem like any witnesses were interviewed by the Province, or if so, they didn't go on the record since the news story contains no quotes and no eye witness reports. I suspect the reporter knows exactly what it was. If it appeared just "beyond the right field fence", it probably was some sort of remote controlled aircraft.

It is interesting that noone seems all that excited by the "UFO" in the videos. As someone noted, they hardly bothered to take more than a moments video. Maybe the people who took the video also knew what it was.

If this was an RC "toy" then maybe it was a planned hoaxed event and the people recording it knew what they were looking at. You might hope that a reporter would reveal all they know about the incident, but this doesn't seem like a "UFO sighting story" at all. Its more like a "UFO hah, hah, wink, wink" story.


"What's that in the distance? Oh, let me zoom in directly on it in case it's a UFO. Yep, that's an alien ship alright. Ok, now that that's settled, let's film these dudes to my right and forget all about it."

The main problem I have is that while I know this is a hand-held camera, it seems to have an artificial camera shake applied which is a common tactic used in Adobe After Effects to make something look more real. Could just be my imagination.

But I do agree that it's odd the guy would zoom in to the distance, spot an object.. zoom out and then carry on filming the game like nothing happened. If I spotted that thing I'd be staying on it.

It could be just an rc craft of some kind.. definitely interesting
edit on 9/10/2013 by miniatus because: (no reason given)

To be fair, our local news runs almost any and every UFO related report .. it's always interesting, even if they don't have any decent evidence to back it up.

I honestly don't know what it is but after back-pedaling and reading everything else .. the airport seems the most obvious

Seems kinda big for a rc copter/toy doesn't it?

Anyone with a good eye can tell it is a star destroyer of some type: 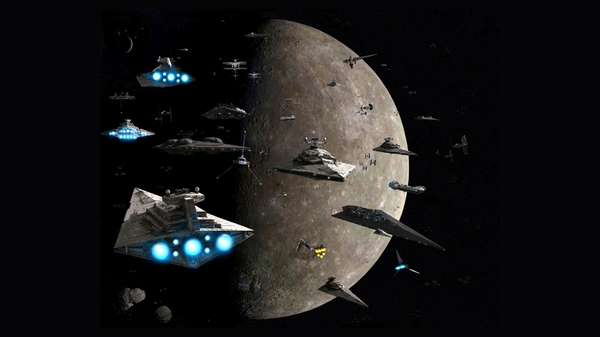 There is no CGI I can see, and the fact that there are two separate cameras (again, one on a tripod, one hand-held that lacked a zoom option), with the hand-held even filming the other camera, still there are claims of CGI.

The object moves with respect of the stationary trees, both vertically, laterally, and along central axis (banking). A building does not. The 3rd photo shows the object at a completely different location, ruling out atmospheric distortions accounting for the 'illusion' of movement.

The tripod camera-person's interest/lack of interest in the UFO is not indicative of anything. He noticed the unidentified object, zoomed in as best he could, and then returned to filming the game as per his job requirement. No need to underestimate the mind's tendency (defenses) to rationalize something surpassing its current capacity for understanding. My first thought too would be "airplane."

Looking back at it's motion once again, it might match that of a small light plane, with gear and wing lights on, coming towards the camera (red on it's left wing, green (assuming it's how the camera sees the blue) on right). Drone, helicopter or R/C can't be ruled out either. But building, CGI, or hoax, highly unlikely.

Make sure to set the video quality to full HD when viewing on both videos.

posted on Sep, 10 2013 @ 11:11 AM
link
I see people in the videos can not identify it and after struggling to do so they just probably think "Well, there is probably a rational explanation to that" and continues watching the game. That's why I always laugh at guys telling that Disclosure is not happening because that would be a big shock to the public. The reality is that "public" is sooo used to UFOs and aliens(television, internet influence) and # these days. Humanity is much more open minded than one would think, it wouldn't be a big deal at all if The Powers would come up with disclosure today.

I still couldn't find an explanation to this. But I know for sure that it isn't plane. At the moment I'm leaning towards the building of similar shape in the park. But the positioning and especially size is a little bit off. But that's the best I could come up until now

posted on Sep, 10 2013 @ 01:21 PM
link
Looks to me like a Multi-rotor RC copter. My quadcopter has LED's in different colors for orientation purposes when flying. These type of RC copters can hover extremely well, most have GPS capability that allow you to position hold and the control boards have sensors for altitude, and orientation.

Everyone knows there's no such thing as Canadian baseball.


I assume that is a joke or a lame attempt at humor.
In any case, conspiracy theorist doubters can check out the website of Vancouver's baseball team, the Vancouver Canadians...


It's a fake. Something to do with a promotion for a planetarium or something.

bluestreak53
The "UFO" is now explained as an IFO. It was a publicity ploy by the HR MacMillan Planetarium. See this linked story:
Baseball park UFO a hoax


I'm still not quite sure how they projected the image above the baseball stadium. Was it on a screen in the parking lot of Queen Elizabeth Park or something?

EDIT: Upon re-reading it, it was just fake viral videos that were released, and there was no actual projection, although they're promoting the projection system in the press releases.


Love it! Reminds me of that old movie, "Batteries Not Included".

Global TV has done a pretty thorough report that shows the actual model, as lit at night and in operation over the HR MacMillan pSpace Centre parking lot. (I don't know it this can be embedded, but here is the linked story)
UFO Over Nat Bailey stadium was a sneaky marrketing trick

The newscaster rather cheekily suggests that there will be people who think the "marketing campaign story" will be dismissed by some die hard believers as just a coverup for a real alien invasion (someone must be visiting this forum, or maybe the Internet abounds with the same sort of people).

The Space Centre was nice enough to host an evening of UFO talks a year or two back. I gave a presentation on some favorite historical BC UFO sightings. So I'm pretty sure it was all done in fun, and they really were not setting out to deliberately fool people. Anyone who saw that "UFO" at the ball game would have known it bore a very clear resemblance to the HR Macmillan planetarium building and would probably have known it was just a publicity stunt.


bluestreak53
The "UFO" is now explained as an IFO. It was a publicity ploy by the HR MacMillan Planetarium. See this linked story:
Baseball park UFO a hoax


I'm still not quite sure how they projected the image above the baseball stadium. Was it on a screen in the parking lot of Queen Elizabeth Park or something?

EDIT: Upon re-reading it, it was just fake viral videos that were released, and there was no actual projection, although they're promoting the projection system in the press releases.


Not a projected image. Just an authentic radio controlled model drone, about 3 or 4 feet in diameter. It had an external skin and internal lights to illuminate the model, plus some added light below to enhance the effect.

I'm glad they were kind enough to show the model so everyone knows how this was done.
I don't know if anyone was fooled at the game into thinking this was anything more that an RC toy drone.

Once more a link to the story which shows the model.

The event occurred during a baseball game on May 28, 1962, and it made one of the most unforgettable baseball games in the memory of "Mr. Baseball" Bud Kerr, who recently passed away.

Here is a link to the story of the event from the UFOBC website:


Here's some quotes from the UFOBC Report:

The sighting was very well witnessed as it occurred over the heads of players and spectators at an evening baseball game between the Vancouver Mounties and the Portland Beavers from the USA. The players took to their heels and the 660 spectators, catching the panic, in the words of the Vancouver Sun Sports for May 29 "churned towards the exits, half of them stopping only when they were outside the stadium."

The Vancouver Sun for May 29 carried the following account: "The fireball lit the Vancouver sky between 10:40 and 10:45 PM. It was seen in Lewiston, Idaho, for about the same length of time, commencing at 10:50 PM. Peter Ivans, 24, suffered a sprained ankle as fans headed for the exits. Downtown traffic slowed to a crawl as motorists craned their necks to see the object. An excited policeman radioed headquarters that an airliner was burning in the sky. Witnesses said it was blue, red, gold and all the colors of the rainbow. They jammed switchboards at police stations, newspaper offices, radio stations and military establishments with excited queries."


I worked in that park back in '69 when it was a AAA franchise called the Mounties. That view is of a gentle hill that is less than 100 feet from the stadium fence.

Well maintained grass with a road through it. it is called "little mountain" by the locals and is officially called Queen Elizabeth Park.

This is a cute fake.

A miniature manufactured and held/mounted on the hill for our entertainment.

A very large movie industry also exists in Vancouver where little toys like this are common.