Two videos of the same Object in Canada, Vancouver


Ahh..no, the conservatory doesn't move, it's not 300' in the air, it cannot be seen from the stadium it's on the other side of the hill but nice try I know this place like the back of my hand,i have no doubt this was a UFO (unidentified flying object)
what's with the corny side lights tho ?
edit on 6-9-2013 by all2human because: (no reason given)

Originally posted by yourmaker
I've lived in Vancouver all my life and have never once seen someone with an RC model.

Also if they were to use one, it wouldn't be by Nat Bailey Stadium.

Why not? Nat Bailey Stadium is right beside Queen Elizabeth Park, which also has a great view of Vancouver. Any RC toy launched from that location would be seen for some distance. And the lights look like they are to the west of Nat Bailey by my estimate.

Seriously, I want to see a real UFO myself, but I think this is just an FPV/RC craft peeking at the game, or having fun with the crowd.

Look at this readily available Walkera MX400. Pretty creepy at night from 1000 feet I bet.

It actually films the 1st guy who filmed it. (the first video) Interesting. This one explains that she has no zoom

I'm not so sure it's filming the first video, the i first video is from someone in the stadium where that pro guy is on the field. I could be wrong but i sure would like to see what the pro guy got on his camera ( if I'm wrong that is)

I can understand the fact someone may see something and assume its something explainable and carry on as if its nothing, most non believers would


I haven't seen any of these hover at a stable height for any length of time though , to me the proportions don't add up to it being something so small


I agree, there is an obvious point in the video where he intentionally zooms in... suspect at least...

posted on Sep, 6 2013 @ 10:06 PM
link
It looks like a house on a hill, one that is pretty well lit or is dark inside and is reflecting the light from the lighting at the game. It is shaped like a gable end of a house and the bright areas seem to look like shapes of windows and doors. Maybe I see what I know, but I have looked at houses on hills in the dark before, I can see one on top of a different hill at night from my front porch through the trees.

Originally posted by all2human
reply to post by Blue Shift


Ahh..no, the conservatory doesn't move, it's not 300' in the air, it cannot be seen from the stadium it's on the other side of the hill but nice try I know this place like the back of my hand,i have no doubt this was a UFO (unidentified flying object)
what's with the corny side lights tho ?
edit on 6-9-2013 by all2human because: (no reason given)


Uh, Queen Elizabeth Conservatory sits at the VERY TOP of a prominent hill (which is actually an extinct volcanic cone). that is in that general direction from the stadium. If you check Google Earth, it looks like it the conservatory should be visible from the stands, unless its totally hidden by trees.

posted on Sep, 7 2013 @ 09:18 AM
link
I don't think its a ufo, but would think maybe some elites wanted to watch the game but not with the crowds, or somehow were involved in some aspects, hopefully nothing nefarious like dusting the crowd....

posted on Sep, 7 2013 @ 10:14 AM
link
reply to post by skyblueworld
This is Off-Topic but your avatar is awesome!
It made my day already.

It also has a red navigation light on it's left wing, where it should be.

Here's the line of sight from the cameras point of view. 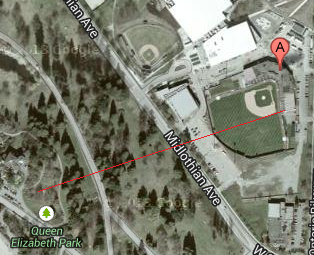 Zoomed out, shows the airport. 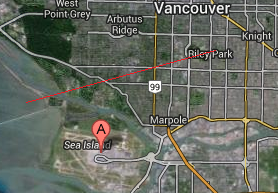 posted on Sep, 8 2013 @ 11:12 AM
link
Seems to be jet type thing.But if the government is accepting it then we've no objection right JimOberg?

Originally posted by Zarniwoop
It looks like the object is in the distance, not in front of the trees.


Agreed, but not because it ever appears behind the trees, but instead since those trees are a little too close.

Most interesting is the movement in the second video. If it were a plane in the distance, and especially at that altitude, for it to sway back and forth that much would be impossible. It both banks and changes altitude much too drastically for any object at that distance, both increasing and decreasing in altitude. A large aircraft close up on final in strong gust would behave like that, but considering the distance and height, I would say unlikely. The movement instead would resemble what a helicopter could pull off, but even there, the distance and size looks off.

Videos overall are incredible: you have multiple witnesses (3 people pointing to it at 0:01), questioning what they perceive in-person, someone saying "what's that," 2 videos by different people, with one even filming the other, and a high-quality zoom on a tripod.

I wonder how it parted from view. Here's another direct screenshot that's been cropped to show only the unidentified object.

posted on Sep, 9 2013 @ 02:05 PM
link
at first i didnt know what to think it was.
But after looking 4 times, i think its a plane on take off coming ALMOST directly towards the camera while gaining altitude.
Thats my opinion and im entitled to it


You got it my friend...the airport is in line and Ive seen many planes taking off over the ocean heading out over the pacific from Nat bailey stadium....I used to take my son out to the airport and watch jumbos take off and head out over the ocean you'd be surprised by how far you can see them in the distance on a clear night.

all2human
Ahh..no, the conservatory doesn't move, it's not 300' in the air, it cannot be seen from the stadium it's on the other side of the hill but nice try I know this place like the back of my hand,i have no doubt this was a UFO (unidentified flying object) what's with the corny side lights tho ?


Well, the UFO only appears to move, because the camera guy is moving. But you could be right about it not being the right building. After checking the angles on Google (the view from the third base bleachers over the second base umpire and out over the right field fence), it looks more likely that the lights were coming from the Celebration Pavilion up on the hill there. The Chapel might have been all lit up for a wedding or something. And you can still see the fountain and light show there, which is what the out of focus video shows around the bottom. Draw the lines.

edit on 9-9-2013 by Blue Shift because: EDIT TO TRY A TRIANGULATION FROM THE TWO SOURCES

posted on Sep, 9 2013 @ 03:00 PM
link
Like I mentioned in the other thread about the same thing, it definitely looks like a plane. And someone at the Youtube link mentioned that it is coming in at the right direction to be coming from the airport.


Although at first it looked interesting... The airport is less than 2 miles away. I suspect we are seeing the upward tilting of the underbelly of a plane ascending. That picture is not a good representation of what we see in the video. The blurring makes it look more like something it is not. Not to mention the strobe lights...


I don't know of any aircraft that have blue lights.

I believe navigation lights are either red, green, or white. I don't think this is a plane.

Edit: It is possible that the camera is white balanced to the mercury vapor lights of the stadium and it would adjust the color of the lights on the object.
edit on 9-9-2013 by compressedFusion because: Added white balancing


Edit: It is possible that the camera is white balanced to the mercury vapor lights of the stadium and it would adjust the color of the lights on the object.

It's entirely possible that the green nav light looks blue... They are in the same color family. I'm no expert though.

This is the kicker for me...

You can see flights at any given time of day ascending right towards the stadium and camera angle.