The Syrian War: What You're Not Being Told - Storm Clouds Gathering

How is a child that dies in a chemical attack more horrible than one that dies from a US dronestrike? Please explain it to me. Ever hear of doublespeak?

Exactly. This is why we should realize that we're being "sold" this idea. They're using emotions and drama to sell this strike to us, same as they did with Iraq. (What about the CHILDREN?!?!?!) Saddam is a very bad man, and so is Assad, yes, yes, but there's nothing that's "better" about children dying from one thing than another.

And if we're SO worried about children in danger... what about OUR children, Mr. President? 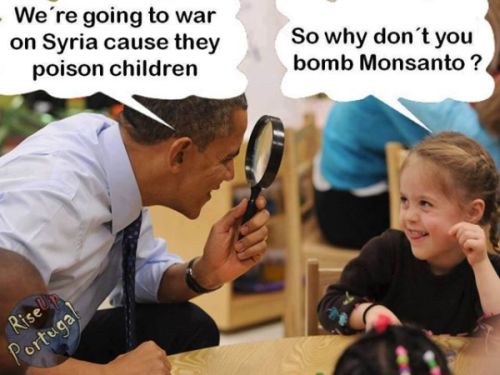 
Awesome video and thanks for posting. I had forgotten about the Gen Clark video as I haven't watched it in a while. Great information.

As I've stated on numerous threads, I am very much opposed to any military involvement in Syria, limited or otherwise. Seems we are being blindly led into a fight that no one wants, with no actual proof presented of who launched that chemical attack. What's worse, the US is becoming a mercenary for other countries who don't want to get their hands dirty. Again I say, if the Arab League is so appalled by the Syrian's use of chemical weapons, then they should use the weapons and training, bought from the US, to strike. Why don't they? That's my biggest question.

Again, thanks for posting!

Its about the Rothchilds banksters expanding their control. Maybe its a coincidence that the Libyan rebels took time off from their rebellion in 2011 to institute a central bank? They did it before they even had a government set up. That is very telling of the power the banksters have.

if anyone is playing Obummer, its the people with the money to do so.


Originally posted by Benevolent Heretic
Please watch it and contact your representatives and the President.


- Okay ... watched it.
- Already contacted my Rep at 12:00 Noon today. Both via email and phone call.
- ATS Thread - Syria is About Oil/Gas Pipelines and Religion
The war is Saudi/Qatar oil/gas pipelines against Syria/Iran oil/gas pipelines.
It's about Muslims killing Muslims because the other Muslims aren't the right kind of Muslims.
Obama is being played by the Saudis ..
And his own warm thoughts for the Muslim Brotherhood (so-called rebels) betray him.

and hey, with war comes defense contracts, military industrial complex needs to be fed......and also, agenda's are being played out as to who control the trade routes of oil out of the middle east.


Not oil, but it supposed to be about a gas pipeline.
blog.shaleshockmedia.org...


The Syrian war has already started. Probably the targets have been selected and it's just a matter of time.
All the countries in the mid east [except for Israel] should all be lumped together as one big battleground.
Apparently the Crusades never really ended.


Yeah, WW1....Right after the Federal Reserve Bank (?) came into existence, Central Banking was tried, rejected and abolished several times in the past in the U.S....More amazing still, usury is unlawful according to the religious texts of the supposedly "Christian " majority here in the U.S. also....

All the messages are lost in static and chaos, nobody really follows their own rules or moral sets because they literally cannot.

I walked away long ago, and only participate to the point that allows me to remain alive.www.youtube.com...
edit on 7-9-2013 by MyHappyDogShiner because: ftp

Once the methods which are employed by the common folk are realized to be more costly to capitalize upon than to allow, methods are restricted and changed, or eliminated to maximize profit for those whose goal is to capitalize.

Control of all of the world's resources is the goal, if it were to make sure everyone got what they needed to survive here, it would be a good thing, but that isn't what's happening....It's very much the opposite.

One not-so-major event in the U.S. is all that will be required to get the stupid public's opinion to support another stupid war and keep the murder, rape and plunder going.

This entire chain of events is to make the dopey people forget about how terrible things have become in the U.S., just getting by, just treading water financially, will be forgotten when people gather under a stupid flag, send their sons and daughters to die in a stupid war, playing for some stupid team.

But Geepers, this ain't a goddamned game!!!!.

They even capitalize on your humanity, your stupid need to go help those innocent people who may not have even really have been gassed or anything like they say they have. Besides, they are only trying to steal more stuff from someone, someplace else, to sell to you.

Damned Consumers..........Instead of watching TV and wasting your time discussing this pointless garbage, read a history book or two. You will find that THIS IS NOTHING NEW. History repeats itself....

And with that MOST excellent reminder, I again, take my leave.

People are really missing what the scariest aspect of the whole syrian situation is. That is he has massive storage of chemical and biological weapons. He has used them, at least sarin on women and children.

OK, see this is the part of this viewpoint that I have a problem with.

How is a child that dies in a chemical attack more horrible than one that dies from a US dronestrike? Please explain it to me. Ever hear of doublespeak?


We need to secure this stuff, you tell me how we do it without getting involved.

It's easy, we don't get involved. Since when is it America's job to overthrow every government that has weapons that can be used against them? You would have to disarm the whole world.

This not some maybe thing, this is happening now and these weapons will fall into wrong hands.. By all accounts it is already happened. Put in perspective, in Boston instead of four dead there would have been hundreds.

You bring up Boston....you do realize that was an attack made with a homemade pressure cooker bomb? There was no weapons of mass destruction needed. A couple guys with some homemade munitions put the whole nation in a state of fear. The fertilizer bomb in OK city and even 9/11 itself were attacks with homemade or unconventional means. So please, spare us all the Bush theme from 2003.


You are using logic to argue with emotion.
This has never worked nor will it.
You may as well be using Mandarin Chinese to speak to an Englishman.
the two are not compatible.

I've always regarded using the lyrics or music of main stream music or anything else as cheesy, but sometimes somebody gets the words so right that it can't be helped.

posted on Sep, 7 2013 @ 12:08 PM
link
I'm not really a "news junkie" but I do keep up and have been trying to follow this call to war thing. I don't know, maybe I missed something, or maybe I'm just too obtuse to get it, but can someone inform me, "If we bomb Syria, who or what are the targets / enemies?

I understand that the Obama administration is claiming that they have substantial evidence that places the blame for this chemical attack squarely on Assad, so why bomb his people? Is it to create such urban instability as to force this civil war, forcing people to go over the edge, and then "force" a democratic election?

Are they trying to re-enact Lybia, and have Assad raped and killed in his streets?

Perhaps they're thinking that they can attack Assad's military and take out it's installations, leaving Syria defenseless, weak and without leadership. In a state of limbo, who knows who could take over this country! What happens to foreign business interests with offices in Syria?

The whole scheme seems completely illogical and counter-productive to any attempt for peace.

If Assad is truly guilty of the chemical attack, can't he be tried in a world court, I don't know, the Hague? If Assad is found guilty he would be stripped of his presidency, wouldn't he? He'd be jailed for "crimes against humanity", right? Or, at the very least, exiled.....thinking of President Marcos, exiled to Honolulu, lol. Oh the "shoemanity" Emelda! Saddam Hussein was executed for his crimes, why wouldn't Assad be dealt with this way, without all the bombs and stuff?

In war, everything not wearing the same uniform as you, or not operating vehicles with the same markings as the one you and your "Team-Mates" are driving or flying is and are the targets.

It's about disrupting the current structure and replacing what remains with a control structure of the more powerful group's choosing, usually for profit.

This makes things difficult to see, there are probably corporations standing in line to bid on the job of rebuilding the country when it's over, to bury the dead even, recycle the wreckage.

posted on Sep, 7 2013 @ 12:37 PM
link
Does the voice of people matter against these evil plans conducted by the bankers and corporate giants?...I'll say yes if we all say NO...It is really as simple as that.Sure they will be able to go ahead and do whatever they want regardless,,but not for long.

posted on Sep, 7 2013 @ 04:52 PM
link
reply to post by Benevolent Heretic
SnF good video, I like how it connected the dots How it says we pay for the guns that kill our own people. I also got the feeling that they were trying to say that we want to get to Iran threw Syria. Anyway just some thoughts I had while watching. Just wanted to say thank you for sharing this.

Originally posted by AlienScience
These reindeer games are not really the business of the general population. Never have been, never will be.

war games which could kill millions of innocent people isnt the people's business? it sure as hell is my business if my life is affected by it.

This actually is my favourite bit.

Originally posted by AlienScience
Other people can continue to argue back and forth about who is right and who is wrong, who is the enemy and who is the ally, who is the traitor and who is the patriot. At the end of the day, none of your opinions matter...all you are doing is participating in the game as designed...one side or the other is using you as their pawns.

sit and do nothing then! while others try to think of a way to remove the evil that rules our lives.


Yes, if war happens many will die...I myself am not in any immediate danger. People are dying every day across the globe, wars, crime, and famine are all over the place. I can't stop them. I provide and protect myself and my family, that is all I can do.

I am not doing nothing, I am living my life and enjoying the small amount of time we have on this rock. You go ahead and fret and worry about things you have zero control or influence over...I'm not going to waste my precious little time on silly things like that.