FINALLY! Obama confronted on the hypocrisy of his Nobel Peace Prize.

A Swedish reporter confronted President Barack Obama about reconciling a pending attack on Syria with his 2009 Nobel Peace Prize that he won almost immediately after taking office.

The reporter asked, “I was wondering, could you describe the dilemma to being a Nobel Peace Prize winner and getting ready to attack Syria?”


And you thought I meant someone in the US. Silly rabbit...

I mean, we wouldnt want to offend anyone as theyre preparing to commit more crimes against humanity.

And how did Obama respond?

Well, he said that he didnt deserve it. REALLY, he didnt!?


Well he was also Times magazine person of the year.

But so was Hitler.

That would be fun

“I was wondering, could you describe the dilemma to being a Nobel Peace Prize winner and getting ready to attack Syria?”


What a wonderful question!! Strike into the Innermost conscience! 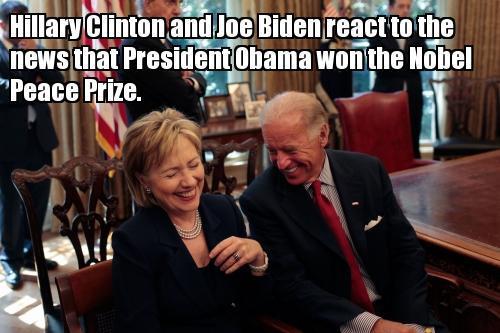 
Well he was also Times magazine person of the year.

But so was Hitler.


WASHINGTON — President Obama has directed the Pentagon to develop an expanded list of potential targets in Syria in response to intelligence suggesting that the government of President Bashar al-Assad has been moving troops and equipment used to employ chemical weapons while Congress debates whether to authorize military action.


Obama shouldn't have accepted it then!

Jesus, he has made the United States a huge joke.


It's amazing how truthful he is a towards admitting he doesn't deserve the noble peace prize I'll give him that but he goes on with useless dribble to beat around the bush and avoid answering the heart of the question.

Helious
+6 more
posted on Sep, 5 2013 @ 09:44 PM
link
There are those, however misguided that would argue that in order to secure peace you must prepare for and in some cases make limited war.

I would challenge those people to articulate why exactly any form of attack on Syria could be justified under humanitarian reasons. I would further challenge the legality of making war on a nation that does not pose an imminent threat to the security of the United States.

Our charter, our founding principles do not allow us the luxury of pre-emptive strikes against sovereign nations to perpetuate the ponzi scheme of the American petro dollar, despite the leadership of our country doing so for the past 50 years.

The invasion of over a dozen countries in the last two decades, is in short, grossly un-American and not in line with our framers construct of why our nation should be at war. The killing of American citizens without due process of law that Obama has already undertaken and completed is a crime, it is not a grey area. Bush is no different and in my estimation should be brought to justice on war crimes and crimes against humanity.

Bombing Syria, if they choose to do so will most likely be the last major error this administration and largely this government makes. The people have had enough.
edit on 5-9-2013 by Helious because: (no reason given)

“I would argue when I see 400 children subjected to gas, over 1,400 civilians dying senselessly in an environment where you already have tens of thousands killed, and we have the opportunity to take some action that is meaningful even if it doesn’t solve the entire problem, may at least mitigate this particular problem, then the moral thing to do is not to stand by and do nothing.”

Sure. I'm sure thousands of Africans that died from genocide would agree with you, Mr O.

Now where's a thumb down emoticon when I'd need one......

Not only did he babble on to beat the bush around the question, he also supplemented his bush beating with lies for an answer.

Made every effort to end the war in Iraq? If you say so.
Wind down the war in Afghanistan? Ok.
Promote diplomacy? By not participating in talks about Syria with Russia.

Oh and he also said...
400 children subjected to gas, or 1400 civilians dieing senselessly in an environment already plagued with war, is the point at which its time to take action? 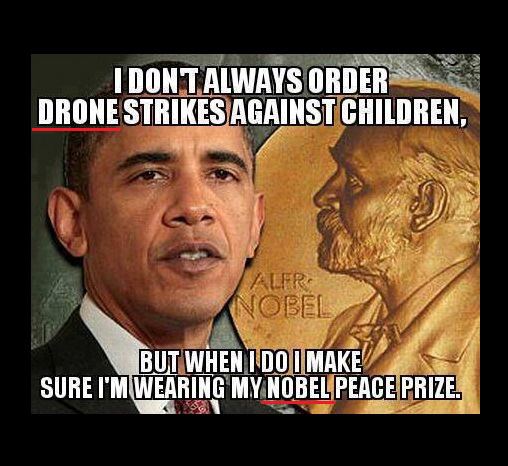 I guess now he can ad to the body count while wearing his peace prize.

Yes, you were certainly unworthy then and you continue to be unworthy!

posted on Sep, 5 2013 @ 10:01 PM
link
Obama is just a puppet, people behind the scenes are pulling his strings. He probably has no choice under threat of death to himself and his family to push these situations to the endgame divised by the evil banksters that really run the show.
Think for one minute, if you were threatened that your family would be murdered and your only option was to become a rich and powerful leader of the powerful nation on the planet what would you do?
And I am not sticking up for his decision making, I just dont think he has a choice and it wont matter what the rest of the world or indeed his fellow Americans think. This stuff is going down as it is all part of their masterplan of dominance by bringing in the New World Order.
Just like Iraq and Afghanistan, there is something in Syria these scumbags want.


Obama shouldn't have accepted it then!

Jesus, he has made the United States a huge joke.


I would say he's carrying the torch. We've been a joke for roughly 12 years now, not that it matters seeing that all of our top tier politicians are dangling on marionette strings.

"The meaning of peace is the absence of opposition to socialism."

But I am one to beleive that there are ruling bloodlines throughout the globe, interconnected from nation to nation. Obama is just their puppet for their next plan.

Something is wrong with this species...

Originally posted by covertpanther
Obama and the US military, is the Worlds number one enemy.


I disagree. Stupidity is the worlds number one enemy. And there is plenty of that to go around.

I wonder if he knows. I wonder if he cares?
All he wants is to be in power long enough to help his Muslim Brotherhood buddies ....


Wait for it. . . . . . Obama will now declare that swedish reporters are responsible for the chemical weapons attacks in Syria!