posted on Sep, 5 2013 @ 05:11 PM
link
The Marines are lobbying hard to get the Navy to retire one of their most vital aircraft, and trying to replace it with the V-22.

The C-2 Greyhound entered service in 1967. It came into its own during the Pueblo Incident in Korea. After the Pueblo was seized, the Navy sent the Enterprise to Korea, and moved the Ranger to South Vietnam. The Navy leadership was concerned that they couldn't operate both ships at the same time, with the same logistics chain.

Enter the C-2 Greyhound. There were fifteen of them in the Philippines and Japan at the time, and they stepped up and made a name for themselves during the incident. They shuttled men, weather appropriate uniforms, spare jet engines, and parts between the two ships (over 2,000 miles apart), allowing both to operate in their respective areas.

A second batch of Greyhounds was purchased in the 1980s, and upgraded since then. There are currently 35 in service, that fly everything from vital mail runs, to cargo, to sailors that missed muster to the carriers in all parts of the world.

Now, some officers in both the Marine Corps and Navy are pushing to replace the C-2 fleet with the V-22 Osprey. The V-22 carries less cargo, isn't cleared for carrier operations, and has less range than the C-2.

According to Marine Col. Greg Masiello, despite the fact that the C-2 is based on the E-2 Hawkeye airframe, has plenty of spare parts, has recently received new propellers, and has undergone structural changes that will allow it to fly until 2027, the C-2 is on the verge of becoming "an obsolete carrier onboard delivery aircraft."

He claims that the V-22 is "an ideal platform for aerial resupply for the Navy." Keep in mind this is the man in charge of the V-22 operations for the Marines.

Currently with the C-2 Greyhound, they can haul 10,000 pounds of equipment almost 1500 miles. With the V-22, that same payload could be as short as 50 miles. The V-22, due to limited space inside the airframe, would have to haul some of that gear slung underneath the fuselage. That means a lot of drag.

The key here is that if the Marines convince the Navy to buy the V-22, that keeps the production line open, which means all the V-22s that the Marines are buying drop in cost. Which the Marines deny.

Problem was, the 7th Fleet also had to keep a carrier off of South Vietnam to support American troops in that embattled country. The USS Ranger was available for the task, but Navy logisticians worried they would not be able to support two separate carriers in different locations using the same infrastructure.

An ungainly new carrier-compatible cargo plane saved the day. The C-2 Greyhound, built by Grumman—now Northrop Grumman—had entered Navy service a little over a year earlier. Fifteen of the bulbous, twin-prop Greyhound were in Japan and The Philippines, from where they speedily shuttled men and urgent supplies such as weather-appropriate uniforms and spare jet engines to both Ranger and Enterprise—this despite the nearly 2,000 miles separating the flattops.

“The C-2 makes us so much more flexible that we could support three separated groups, if necessary,” boasted Rear Adm. Marshall White, commanding air forces in the Western Pacific.

posted on Sep, 5 2013 @ 05:36 PM
link
Oh but of course they want the V-22. Why in the world would we use something simple, effective, unsophisticated and so time proven that, well, it's just old because it's old? Far better to use insanely complex contraptions that took the worst aspects of fixed and rotary wing designs, slapped them all together into something an old comic book writer would gaze upon with pride and make it the standard as a flying cargo truck. What could anyone ever see the matter with that boundless logic?

I understand the V-22 is, for the purposes it was originally envisioned, an extraordinary aircraft. I understand it to also be one giving truth to the old saying that a helicopter is just many thousands of parts flying more or less in tight formation. Isn't this a real REAL bad idea to start using as a replacement to something as comfy and workable as the C-2 has been?

It reminds me of the flying battleship the B-52 is/could be further adapted into on a cheap, working and very effective frame... vs. a batman fantasy on steroids so incredibly valuable, it's almost too much to risk in something as dangerous as combat. Only the DOD could do these things and mean it.


I remember reading an article years ago calling it down right dangerous but since it's arrival in Afghanistan it has proven itself and won hearts, but it looks like the Osprey still has it's haters.

It is a weird looking but cool functioning plane, a hybrid between a helicopter and air plane. 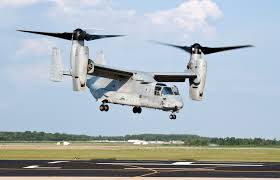 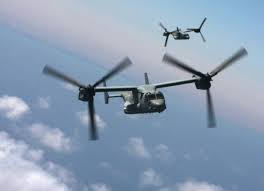 
The Osprey, for its mission, is a great airframe (especially since the 2.0 came along). The problem here is that carrier resupply is a HORRIBLE mission to try to fit the Osprey into. The C-2 has a higher ceiling (it's pressurized), MUCH longer range, even at max payload, and has had one major accident in the last 40 years (and no one was killed).

I think the Osprey is a unique and fascinating design. But trying to force it into roles it was never meant to fill is just asking for trouble, and the height of stupidity. Hell, it can't even fly off of smaller ships without them refitting the deck on them, so you can't even use it to resupply the smaller ships of the group.

posted on Sep, 5 2013 @ 11:36 PM
link
Much ado about nothing. The sole source for the story is a lowly Marine Colonel who (understandably) wants to push the V-22 as it is his program. If you think the Dept of the Navy is in danger of planning their acquisition program for a replacement (which isn't even on the table for more than a decade) on the words of that Colonel, I've got a bridge to sell you.

Side note, they (Boeing) completed the first tanking tests with an Osprey and F-18C. They're pushing hard for as many roles as possible. That's their job. I don't think the C-2's are in any immediate jeopardy.


I don't think they're in jeopardy right now, but this goes to highlight the lengths people in the Pentagon will go to for their pet projects. Screw what the guys in the field need, this is their project and that's all that matters.