Is The United States Going To Go To War With Syria Over A Natural Gas Pipeline?


Precisely,the USA is going in as bait for Iran

posted on Sep, 5 2013 @ 03:59 PM
link
Gas and oil most like.
This is a link to an encounter with the Saudis and Putin, but so far the veiled threats and wooing have had no effect on him,

This the Telegraph's version, much the same, a little more gentle in tone. But still, Putin told them where to go.

There are other reasons too. That Putin and Assad have made agreements earlier this year about pipeline controls and clean-ups in Syria after the conflict ends, they would go to Russia and China, all big bucks, and no US influence, or West European for that matter, That's probably why McCain is sulking, the American military corporations losing out on the loot. Oh Dear!

Originally posted by schadenfreude
My friend & I actually discussed this last night, so I was surprised at the synchronicity involved in the timing.
(I admit I used to listen to AJ a few years ago, but haven't since)


Why has the little nation of Qatar spent 3 billion dollars to support the rebels in Syria? Could it be because Qatar is the largest exporter of liquid natural gas in the world and Assad won’t let them build a natural gas pipeline through Syria? Of course. Qatar wants to install a puppet regime in Syria that will allow them to build a pipeline which will enable them to sell lots and lots of natural gas to Europe. Why is Saudi Arabia spending huge amounts of money to help the rebels and why has Saudi Prince Bandar bin Sultan been “jetting from covert command centers near the Syrian front lines to the Élysée Palace in Paris and the Kremlin in Moscow, seeking to undermine the Assad regime”? Well, it turns out that Saudi Arabia intends to install their own puppet government in Syria which will allow the Saudis to control the flow of energy through the region. On the other side, Russia very much prefers the Assad regime for a whole bunch of reasons. One of those reasons is that Assad is helping to block the flow of natural gas out of the Persian Gulf into Europe, thus ensuring higher profits for Gazprom. Now the United States is getting directly involved in the conflict. If the U.S. is successful in getting rid of the Assad regime, it will be good for either the Saudis or Qatar (and possibly for both), and it will be really bad for Russia. This is a strategic geopolitical conflict about natural resources, religion and money, and it really has nothing to do with chemical weapons at all.

You can read the rest at the source.

What I find interesting, is that for all practical purposes, maybe Europe is Russia's "petrodollar" and the only reason they have been staying afloat during this economic crisis.

Also, while I was looking into this, I came across those Britcam defense e-mails, that ppl say they were faked, yet of they are, how did those ppl know a CW attack would happen in the first place?

And let's not forget the Saudi's role in all of this either.

Thoughts? [/quote
How do you shrink the quotes lol. Just one of the reasons you have discovered why Russia so hell bent on keeping Assad in power. As for the US they don't care about natural gas there accept maybe in support of old allies. We, USA, is setting on natural gas deposits that most believe are the largest in the world. That is not even accounting for deposits under the perma frost or in Canada.

No, Syria not about natural gas for us, yes it is for Russia and the other oil players that area. 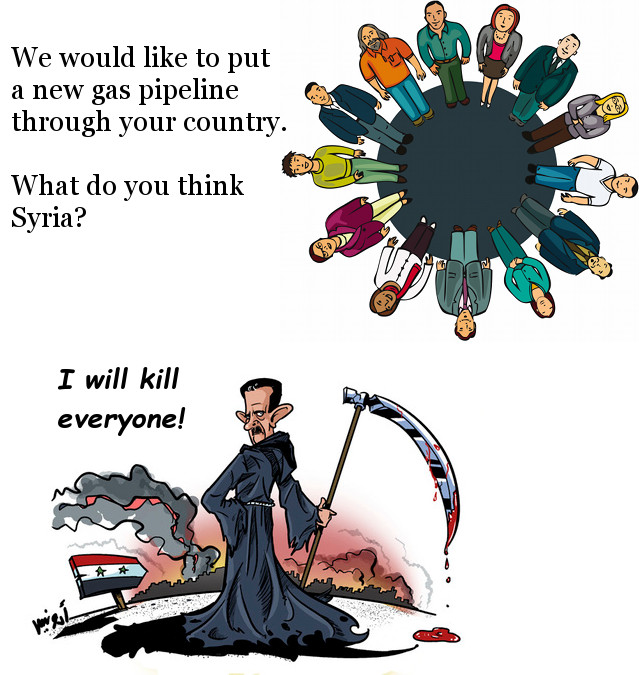 There is yet another possible angle to consider - offshore NG field finds.

A few years ago, a survey of the Eastern Med coastline found a rather large gas and oil field, off the coast of Gaza. Israel contested ownership, but was ruled in an International Court to be in Gazan territory. Not long after, the Fateh-Hamas civil war erupted. Mahmoud Abbas, leader of Fateh was courted by Israel and the US and provided with container loads of arms to overthrow Hamas. The planned outcome would have been the installation of Abbas and a structured rebuilding of Gaza paid for, through extraction rights to the paymaster's advantage.

I'd suppose that the survey also found reserves off the coasts of Syria & Lebanon as well, adding to the push to secure preferential deals by whoever is in power after the dust settles. Makes me wonder if that was all part of the Arab Spring plan, as all the countries involved have Mediterranean coastlines

...just thought I'd throw that into the mix..

EW. Grey and green? Can I like, choose the colors before I hurl?

Seriously, totally off-topic & will likely be removed, BUT...

Please tell me I have SOME control over the color...

I can barely make out anything, have some compassion for the older posters! lol


Very good point to add! I don't recall anything personally about NG fields off the Southern Israeli/Gaza coast but then God alone could keep up with everything happening.. lol.

Weren't there also some major resource finds off Cyprus that multiple nations were also interested in laying some or complete claim to? It's a wild wild region for conflicting interests. Nothing is what it seems, I'm thinking. Even to those in the middle of it. Too many faces on each player here.


Very good point to add! I don't recall anything personally about NG fields off the Southern Israeli/Gaza coast but then God alone could keep up with everything happening.. lol.

Weren't there also some major resource finds off Cyprus that multiple nations were also interested in laying some or complete claim to? It's a wild wild region for conflicting interests. Nothing is what it seems, I'm thinking. Even to those in the middle of it. Too many faces on each player here.


I thought it was between Israel & Turkey, seeing as how Gaza had no standing at the time?


Well, my goodness..... I'd been focused more on the Eastern interests than what was out on the sea-side of this whole conflict. *WOW*. I sure missed a whole different side to this.

In 2009-2010, Israel announced that yet more natural gas fields were found in the Eastern Mediterannean sea, which has become one of the largest natural gas finds in the region. Two of the largest fields, known as Tamar and Leviathan (quite interesting and foreboding names when one considers the Jewish and Christian religious texts and traditions), are largely accepted as belonging to Israel.

260 miles west of Israel, Cyprus also sits atop a massive natural gas field. According to Cypriot figures, the fields hold enough natural gas to make the tiny nation energy independent for the next 200 hundred years even while Cyprus becomes a gas exporter. 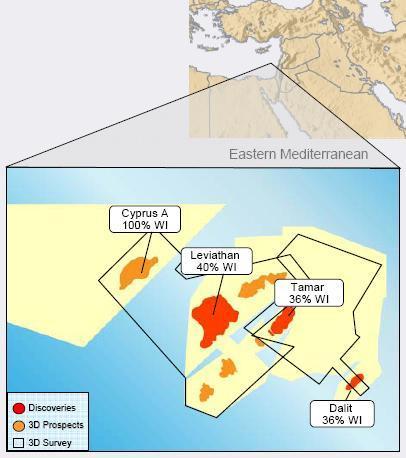 I guess people were right many years back when they predicted the 21st would be a century of strategic resource wars. Oh goody.....not
edit on 5-9-2013 by wrabbit2000 because: (no reason given)


Nice to see this finally get onto ATS

My brother read about this about 4 days ago and told me about it, im surprised it took this long to get here almost felt like finding the article he read and posting it up myself.

In my mind its the most likely real reason this whole thing is happening in Syria (and explains pretty much all the bollocks thats happened in the middle east over the last few decades), makes a hell of a lot of sense and is alot more grounded in reality compared to some of the more typical CT's that get banded around here more often.

The good old dollar... gotta love the extent people will go for to get there hands on as much of it as possible.

Sooner oil becomes a thing of the past the sooner the old shackles can be thrown off and we can get a nice clean slate going again, humanity might loose much in the process but it'll be hopefully be worth it in the long run... im sure they'll go kicking and screaming though.

I thought it was between Israel & Turkey, seeing as how Gaza had no standing at the time?

Originally posted by TamtammyMacx
There was a pipeline issue with Afganistan and the ones in power. Did they get that one finished?


Amen..the pipeline issue was with the Taliban, they told the US they could'nt build their pipeline.
Madeline Albright told the Taliban their options about it -

"you will sleep under a blanket of gold, or you'll die under a carpet of bombs".....she told them.

They choose option 2, the carpet one..

Then, when Afghanistan got it's new President Hamid Karzai,(who just happens to work for HARKEN ENERGY aswell) guess what, THEY BUILT THE PIPELINE...
edit on 6-9-2013 by andy1972 because: (no reason given)


I thought it was between Israel & Turkey, seeing as how Gaza had no standing at the time?

This one was talking about Turkey & Cyrus

Gas Field Off of Cyprus Stokes Tensions With Turkey

The reason why I remembered about Turkey, was b/c Turkey had ended their peace treaty w/ Israel in '09.

Secondly, Israel found it, which means nobody found it. (Lest we forget, most of those nations don't even have Israel on a map) IOW, they pulled a "We claim this land in the name of Spain BS, and the natives didn't even know they were lost.