posted on Sep, 5 2013 @ 10:38 AM
link
Here is a collection of the first known photographs of world events or other things. I've seen a couple of these before, but many of them were new to me. I particularly like the photo of the gentleman drinking beer. Would love to have a print of this to hang in my bar at home. Enjoy. 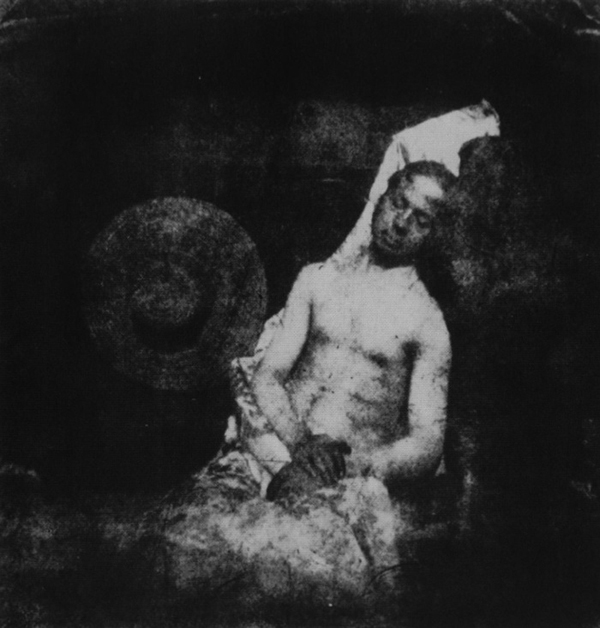 One of the earlier photo-pioneers, Hippolyte Bayard (1807–1887) was persuaded to postpone announcing his photographic processes to the French Academy of Sciences by François Arago, a friend of Louis Daguerre, who invented the rival daguerreotype process. Arago’s dealings cost Bayard the recognition as one of the principal inventors of photography. He eventually gave details of the process to the French Academy of Sciences on February 24, 1840 in return for money to buy better equipment.
As a reaction to the injustice he felt he had been subjected to, Bayard created the first staged photograph entitled, Self Portrait as a Drowned Man. In the image, he pretends to have committed suicide, sitting and leaning to the right. Bayard wrote on the back of his most notable photograph:
“The corpse which you see here is that of M. Bayard, inventor of the process that has just been shown to you. As far as I know this indefatigable experimenter has been occupied for about three years with his discovery. The Government which has been only too generous to Monsieur Daguerre, has said it can do nothing for Monsieur Bayard, and the poor wretch has drowned himself. Oh the vagaries of human life….! … He has been at the morgue for several days, and no-one has recognized or claimed him. Ladies and gentlemen, you’d better pass along for fear of offending your sense of smell, for as you can observe, the face and hands of the gentleman are beginning to decay.”
He managed to send the death picture to his antagonists with this suicide note attached to the back. Two years later, the Societe d’Encouragement pour I’Industrie Nationale gave Bayard 3,000 francs. Today, death features large in war, disaster and famine photography and it usually sends a stronger message. With a 12 minute exposure, Bayard did just that by playing dead 170 years ago. 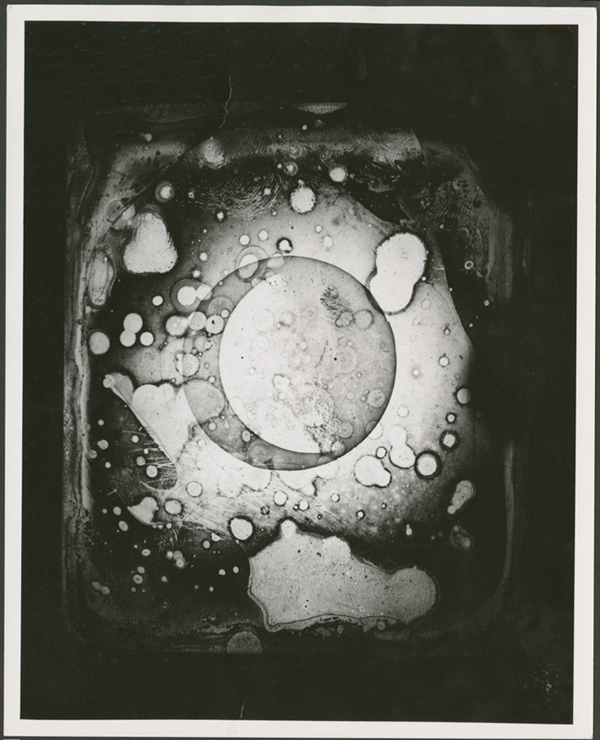 Mirror-reversed Image of the daguerreotype attributed to John W. Draper, believed to have been taken March 26, 1840 from his rooftop observatory at New York University (at Wooster and 4th Streets). 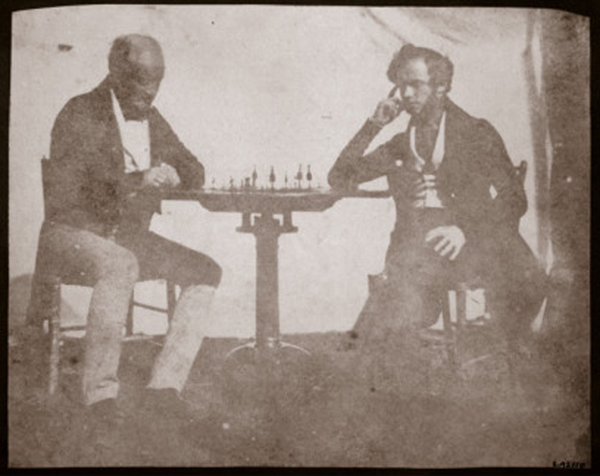 Nicolaas Henneman Contemplates His Move in a Game of Chess, September 1841 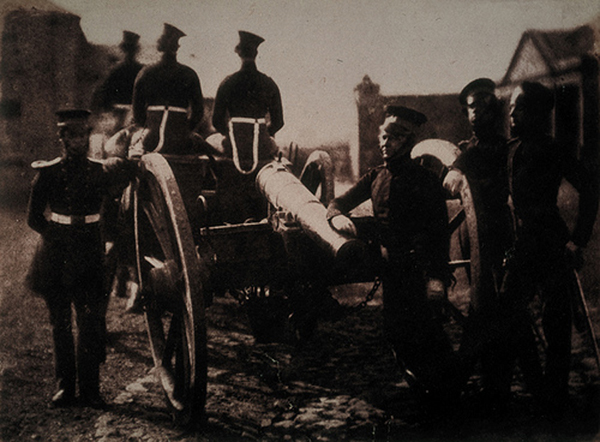 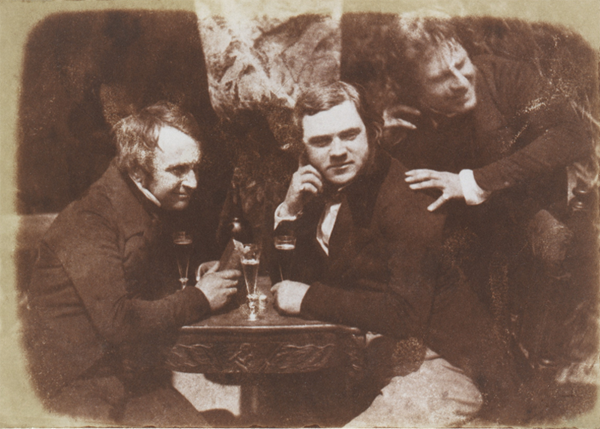 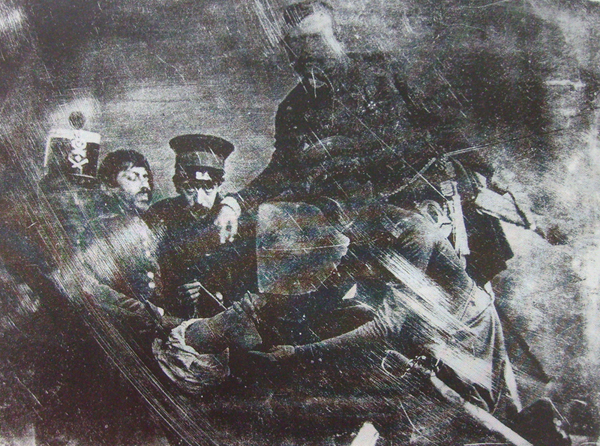 Leg amputation of sergeant Antonio Bustos, practiced by the Belgian surgeon Pedro Vander Linden, who is holding the amputated leg, during the Mexican-American war, it is considered the first daguerreotype of an amputation on the battlefield 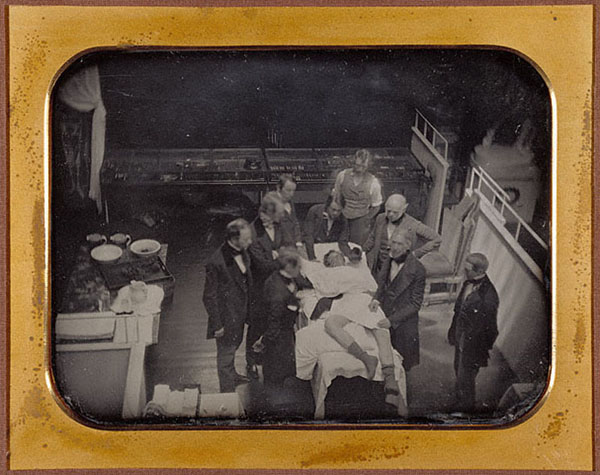 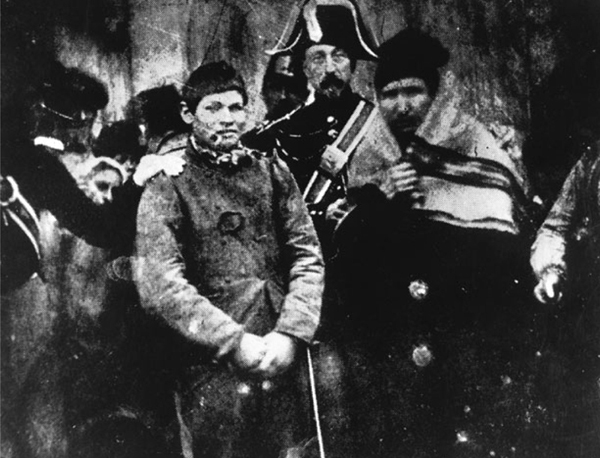 A daguerreotype made in 1847 of an arrest in France. It is thought to be the first ever news photograph. 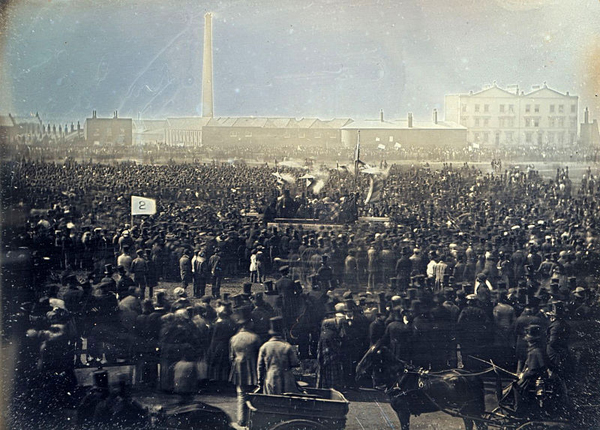 This photograph of the 1848 revolution is a precious document; it was taken during one of the four days in June which left several thousand dead among the insurgents and the government forces in Paris. Its exact date and the name of the photographer are known (an amateur photographer who lived in the Popincourt district?) from the engraving published in L'Illustration of 1-8 July 1848 and in the special issue of the magazine Journées illustrées de la révolution de 1848, published in August 1848. 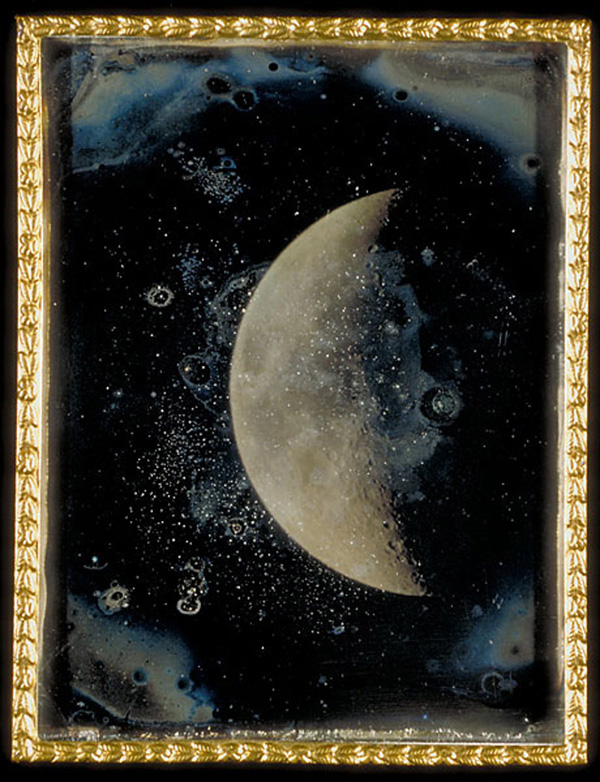 View of the Moon by John Adams Whipple 1852 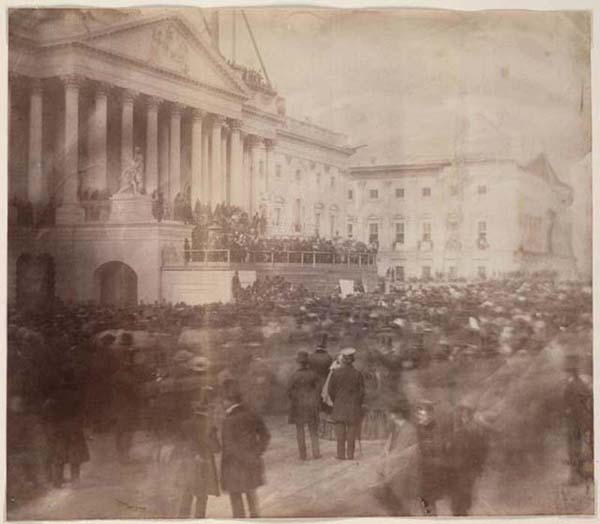 Inauguration of James Buchanan, President of the United States, at the east front of the U. S. Capitol Albumen print, March 4, 1857 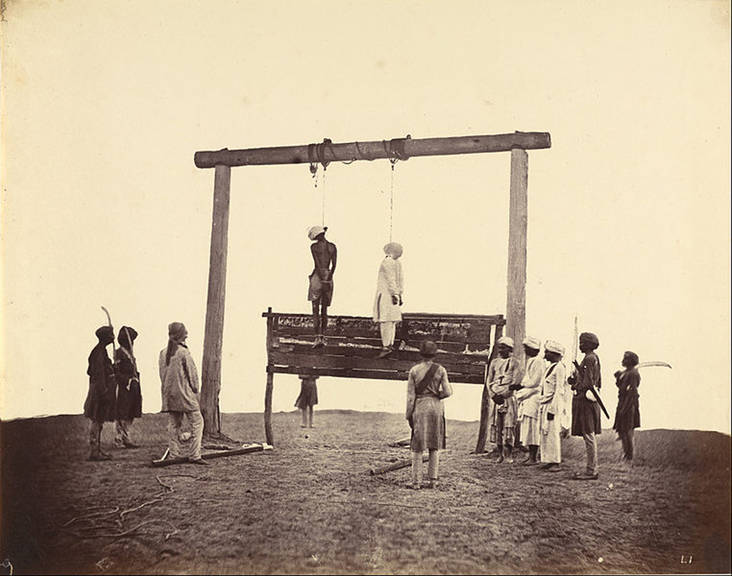 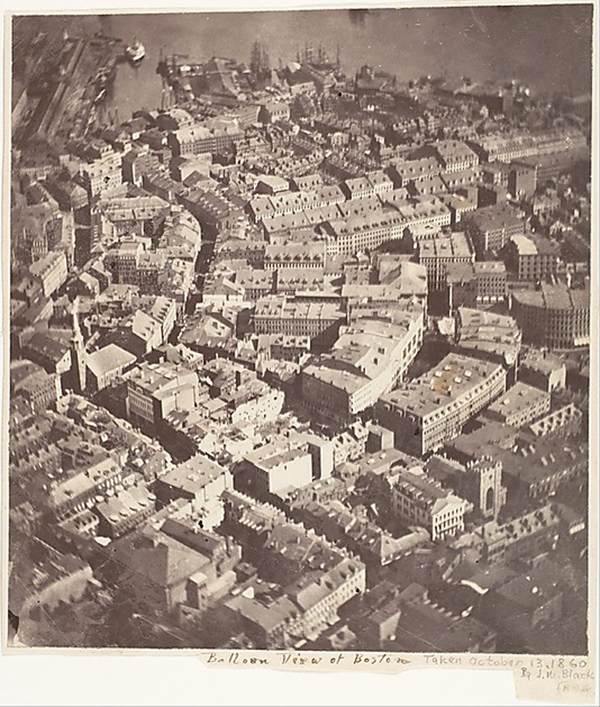 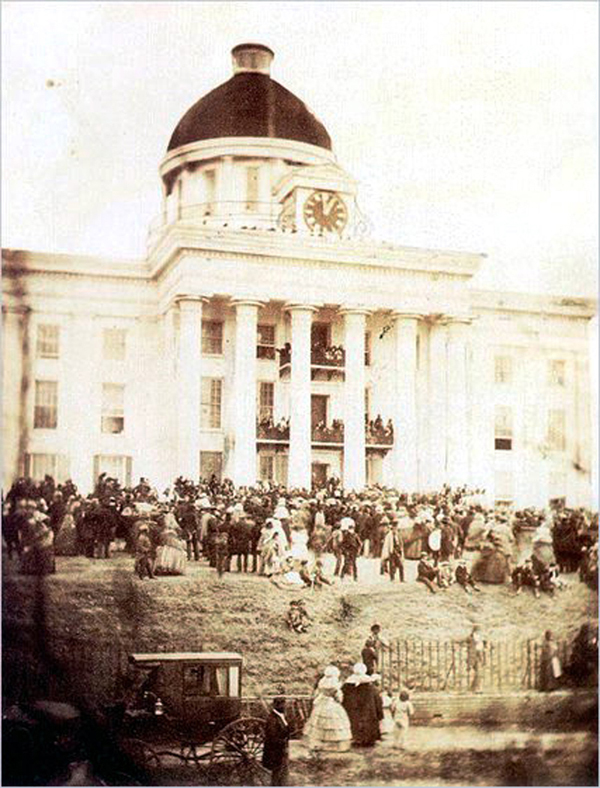 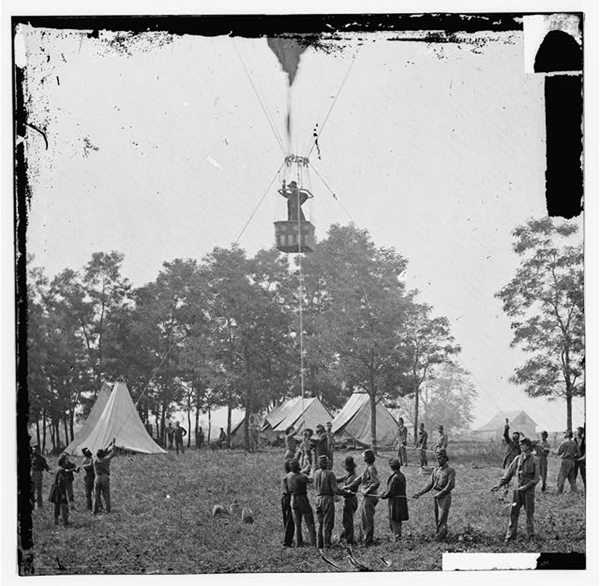 Photograph from the main eastern theater of war, the Peninsular Campaign, May-August 1862. 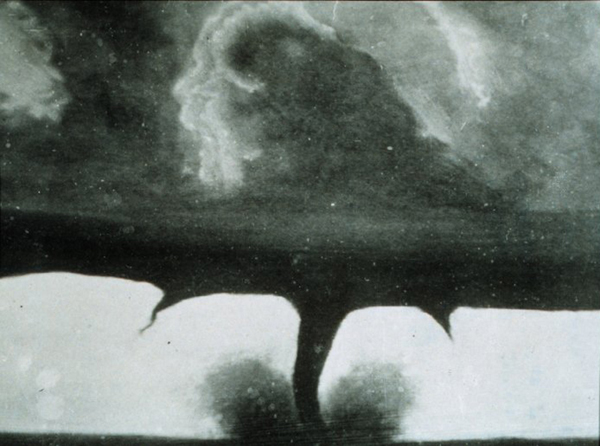 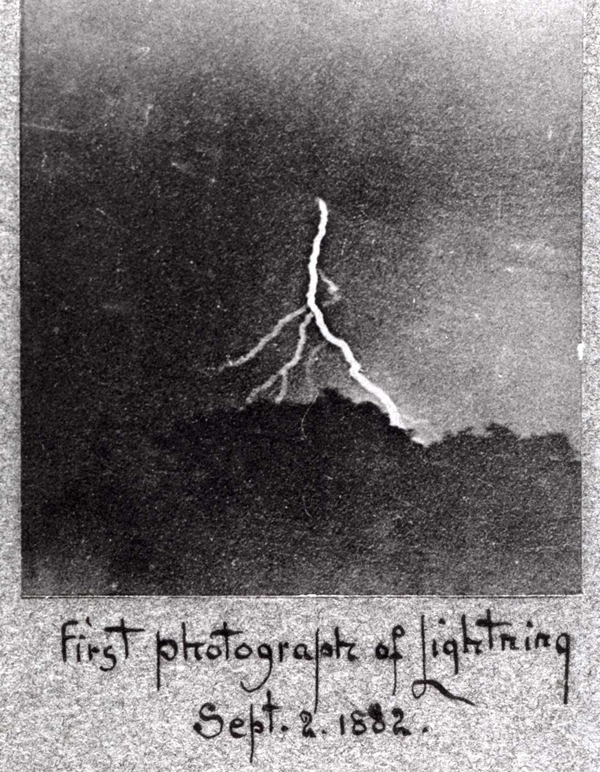 By Philadelphia photographer and Franklin Institute member William Jennings on September 2, 1882. Jennings pioneered the use of the camera for investigating lightning - he was particularly interested in documenting its physical shape and the varied patterns it took on. 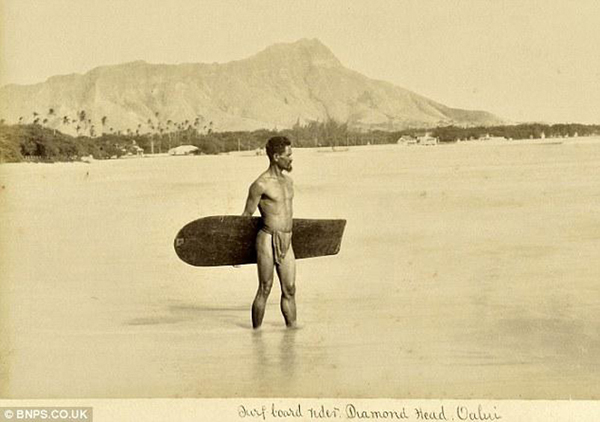 The Hawaiian beach boy is photographed wearing a traditional loin cloth and shown standing in the shallows holding his rudimentary board. 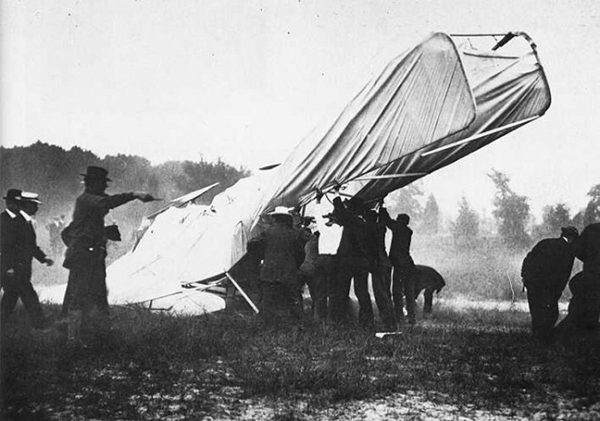 During flight trials to win a contract from the U.S. Army Signal Corps, pilot Orville Wright and passenger Lt. Thomas Selfridge crash in a Wright Flyer at Fort Myer, Virginia. Wright is injured, and Selfridge becomes the first passenger to die in an airplane accident.

first ever death jump recorded i think this guy had balls lol
edit on 5-9-2013 by SupersonicSerpent because: (no reason given)

posted on Sep, 6 2013 @ 11:47 AM
link
Awesome. Just exactly the neat little kind of thing I expect from ats You represent a shining example of what ats means to me. Shining a light so that we may have a chance to no longer be ignorant of all the wonderful truth out there